We first talked lovingly about Sharp’s amazing 32-inch 3,840-by-2,160-pixel display in November, but now that we’ve gone hands-on, we got a full-on crush. Called the “PN-K321”, the $5000 display is aimed at medical imaging professionals and high-end image/video professionals.

To be honest, the gallery, taken with Canon’s new 6G DSLR, doesn’t do it justice. Please, Apple: Here is your next iMac Retina and Thunderbolt display.

These displays aren’t just beautiful. The IGZO technology also uses a fraction of the power required for today’s LCDs. While most of the power used is still in the LED backlighting, the IGZO pixels save a great deal of power —as much as 90 percent vs. traditional displays— and can still stay on even after the machine has powered down, something great for photoframe-type functionality.

Apple decided to not go with Sharps’ IGZO displays for its latest round of iPad launches. It instead sourced display components from AU Optronics, LG Display, and Samsung, but several reports in the past indicated Apple is interested in the technology. Apple was even recently rumored to be potentially making an investment in the failing company—much like Apple partner Foxconn previously agreed to.

Sharp also has some other fun stuff on display that could wind up in Apple products, including:

Sharp demonstrated bendable displays in 3.4-inch variety that could end up in wearable products going forward. These would go up against similar technology demonstrated by Samsung at previous CESes. 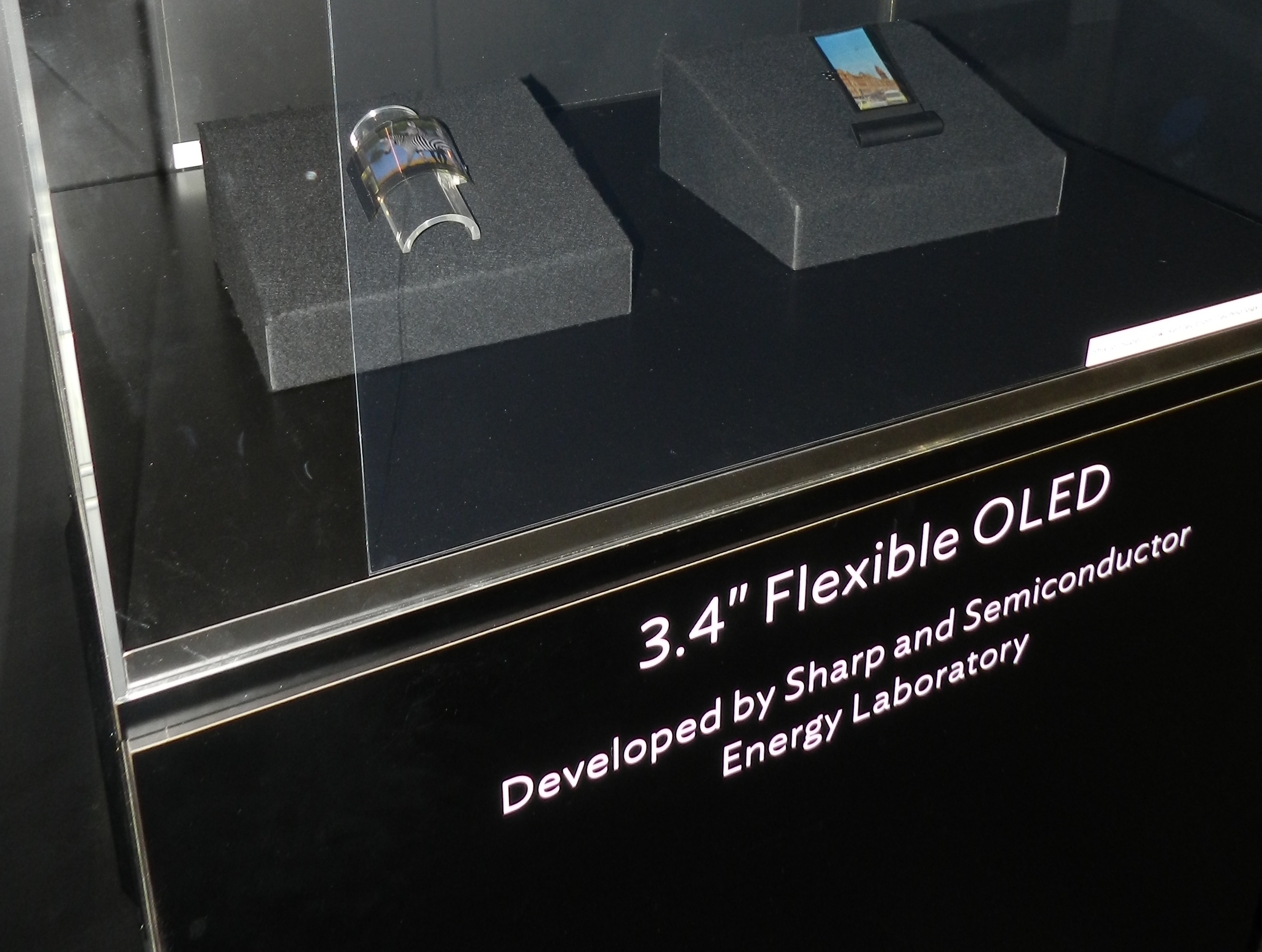 Sharp also showed us the best display in the world—an 8K (!!) 85-inch display— that would likely be considered ‘Retina’ too. Walking up to within about two feet of the display, you cannot see pixels. This is the future.

Las Vegas, January 7, 2013 – Brace yourself for a look into the future…today. This year, Sharp comes to CES with breakthrough technologies and exciting products that show the future isn’t that far off – Sharp is making amazing things happen now.

“Whether in your home or in your hand, display technology is everywhere,” said Toshi Osawa, CEO and Chairman of Sharp Electronics Corporation. “From game changing IGZO, to stunning Ultra HD products, and large screen televisions, the introductions we are making at CES 2013 will advance people’s lives at home, work and everywhere in between.”

For the first time in North America, the company will showcase the amazing possibilities of IGZO (Indium Gallium Zinc Oxide) and introduce the first new products that use it. Today and tomorrow, IGZO will engender a whole generation of display products that are dramatically more energy efficient, produce high-resolution images and are ultra-responsive to touch.

Sharp will take the lead in Ultra HD, the next generation of high-definition 4K display technology for the home, showcasing two lines of large screen Ultra HD TVs that will be introduced this year.

Details of the new products and technologies showcased at CES include:

IGZO Sharp is the first to successfully mass produce IGZO, an innovative compound that replaces the industry standard amorphous silicon material used for the active layer in thin-film transistors (TFTs).

IGZO’s advantages are: · Super high-resolution and clarity: IGZO’s transistors are much smaller than traditional LCDs and have significantly higher electron mobility. Therefore, more data can be shown in a single display, creating a stunningly detailed image – up to four times that of conventional full-HD or 1080p LCDs.

· Ultra-low power consumption: IGZO can maintain the onscreen data for a certain period of time without refreshing the data, even when the current is off. This helps cut back the power consumption to achieve longer battery life for mobile displays.

While the possibilities for this technology are far reaching, Sharp is already implementing IGZO technology in its displays, tablet PCs, monitors and smartphones available today.

Ultra HD Intuitive IGZO Business Display At CES, Sharp is revealing its state of the art 32”-class professional LCD monitors, the PN-K321 and a touchscreen monitor prototype, which feature IGZO technology with ultra-high-definition 4K × 2K resolution (3,840 × 2,160 pixels), four times the pixel resolution of full high definition. These models also boast the industry’s thinnest design at just 35mm. The touchscreen monitor prototype is capable of 10-point multi-touch option, allowing users to perform multiple gestures at once simply by touching the screen, which is especially useful for portraying and interfacing with images, graphics, complex visual elements or architectural designs. The PN-K321 is planned to launch in February.

Ultra HD Sharp is taking the lead in the development of the next generation of screen resolution: Ultra HD. Previously known as 4K, this significant leap in viewing is four times the pixel resolution of 1080p. At CES 2013, Sharp will demonstrate two large screen Ultra HD technologies that it will bring to market in 2013:

ICC Purios: Developed jointly with I-cubed Research Center Inc., ICC Purios combines Ultra HD resolution and the ICC (integrated cognitive creation) image processor, which reproduces the “cognitive” process by which the human brain interprets light stimuli. Employing this unique process provides a similar sense of depth, texture and perspective to what people experience when looking directly at an object for a stunningly lifelike viewing experience where everything is in sharper focus. The picture is so stunningly real, ICC Purios is the world’s first Ultra HD TV to receive THX® certification, confirming that the display not only meets industry 4K performance guidelines, but that it maintains content accuracy true to the original HD image. This model is scheduled to make its North American debut in summer 2013.

Big, Bold Audio Sharp is demonstrating two exciting audio products at CES 2013. The HT-SB60 is the only soundbar system on the market designed from the ground up to be used exclusively for 60” and larger TVs. The system provides clear and powerful sound via a 2.1 channel arrangement with 310 total watts of power and a wireless subwoofer. Its flexible design offers options for horizontal and wall mounted use. Exposed drivers and a rich black-brushed aluminum finish offer a striking visual element.

The second, the stylish GX-M10 Portable Audio System, has built-in CD and iPhone, iPod and iPad docking stations, as well as microphone and guitar inputs with input level control. Operating on AC/DC or battery outputting 100 watts of power and sporting LED accent lighting on its dual subwoofers, the GX-M10 consistently delivers high power audio no matter where it is placed.

8K The company is showing a glimpse of the high definition future with a demonstration of 8K resolution on an 85” (diagonal) screen size class TV. Sharp was the first brand to showcase this groundbreaking technology at CES 2012. 8K is an astounding 7680 x 4320 resolution, the equivalent of 16 times the pixel resolution of HDTV and presents an unprecedented level of incredibly detailed, high-quality images.