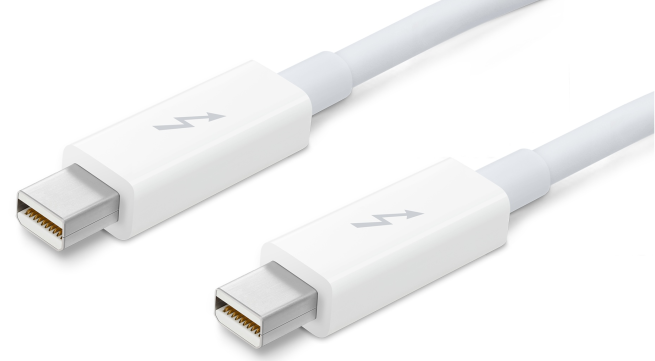 Apple has reduced the price of its 2.0 m Thunderbolt cable from $49 to $39. The Thunderbolt cable, which can be used for data transfers and for display attachment purposes, was originally released in mid-2011.

With Thunderbolt, you get superfast data transfer speeds and huge expansion capabilities. It features two 10-Gbps data channels per port, which means data transfer is up to twice as fast as USB 3 and up to 12 times faster than FireWire 800. Use the Apple Thunderbolt Cable to connect your Thunderbolt-equipped peripherals to your iMac, Mac mini, MacBook Pro, or MacBook Air. The cable can also be used for target disk mode between two Mac computers that support Thunderbolt, or to use an iMac as a display for a MacBook Pro equipped with Thunderbolt.

To go along with the price cut, Apple has also released a shorter variant of the Thunderbolt cable. The new $29 version carries a length of 0.5 m. Both cables are in stock on the Apple online store.