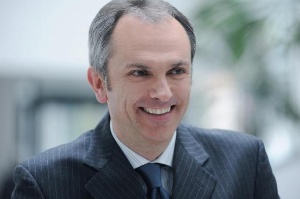 Xerox just announced Luca Maestri, its chief financial officer, will depart from his post after less than two years to accept a corporate controller position at Apple.

Xerox, a company that develops printers and copiers, said it already began an external search to replace Maestri, who also worked as Nokia Siemens Networks’ CFO before going to Xerox in 2011.

Prior to Nokia, according to Maestri’s biography on Xerox’s website, he held various senior executive finance positions at General Motors Corporation for 20 years.

Maestri earned a bachelor’s degree in economics from Rome’s Luiss University in 1988, as well as a master’s degree of science in management from Boston University in 1991, and he is a current board member of The Principal Financial Group.

“Luca is a stellar finance executive whose contributions have brought great value to the transformation of Xerox into a services enterprise,” said Xerox Chairman and CEO Ursula Burns in a press release.

“Luca is a stellar finance executive whose contributions have brought great value to the transformation of Xerox into a services enterprise,” said Ursula Burns, Xerox chairman and chief executive officer. “He’s helped strengthen our financial foundation, which will serve his successor, our company and our shareholders well for the long term.”

Added Maestri, “I came to Xerox with a strong belief in its strategic direction and I leave with even greater confidence in the company’s rich opportunity as a leader in outsourcing services and document technology. It’s been an incredible learning experience to be part of this major business shift for such a respected brand. I’m proud of our progress, and I know Xerox is on very firm footing for sustainable success.”

Burns noted that the company has initiated an external search for a new CFO, and that Maestri will be with Xerox through the end of February to help manage the financial leadership transition. She added that the company remains on track to meet its fourth-quarter guidance, which include GAAP earnings per share of 24 to 26 cents or adjusted earnings per share of 28 to 30 cents. Xerox will announce its fourth-quarter and full-year 2012 earnings on January 24.