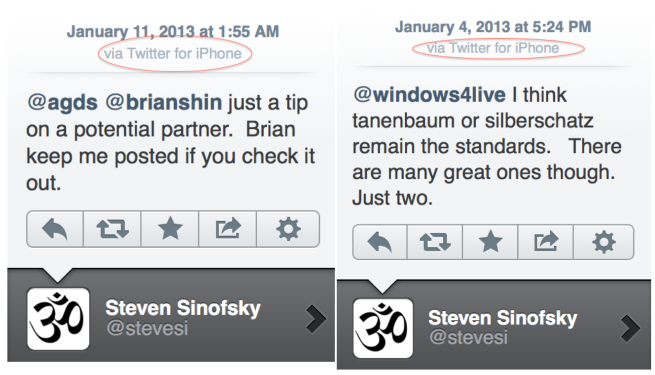 Immediately following the release of the Microsoft Surface in November, Microsoft sent its Windows head Steven Sinofsky packing. Just a couple of months later, he is already trying out a new platform: iOS.

We were tipped to a tweet from Sinofsky (@stevesi) from January 11th that was sent from Twitter for iPhone. We soon discovered a second tweet from the same platform on January 4th. Sinofsky is still tweeting from his Microsoft Surface and the Web, but we don’t see as many Windows Phone-based tweets as we do earlier in his Twitter timeline.

Sinofsky spent the last week at CES where he documented the 15 hours he spent on the show floor.

After all of those years using the required Windows Phones, it sure didn’t take him long to hop over to iOS.

Update: Sinofsky has commented on Twitter about his use of the iPhone:

Sure I use an iphone at times. I have a Samsung too that i use.  I want to be familiar with the work of all companies.

It is precisely what you say “Who knows, maybe he is just evaluating the competition some will say.”. I have owned every iphone released (and every ipad and galaxy and kindle). It is far better to actually use a product day in and day out so before CES I started using it and will use it for a month or so. Just prior I was using my 920. In Office I spent a long time using SmartSuite or Google Docs for the same reasons.