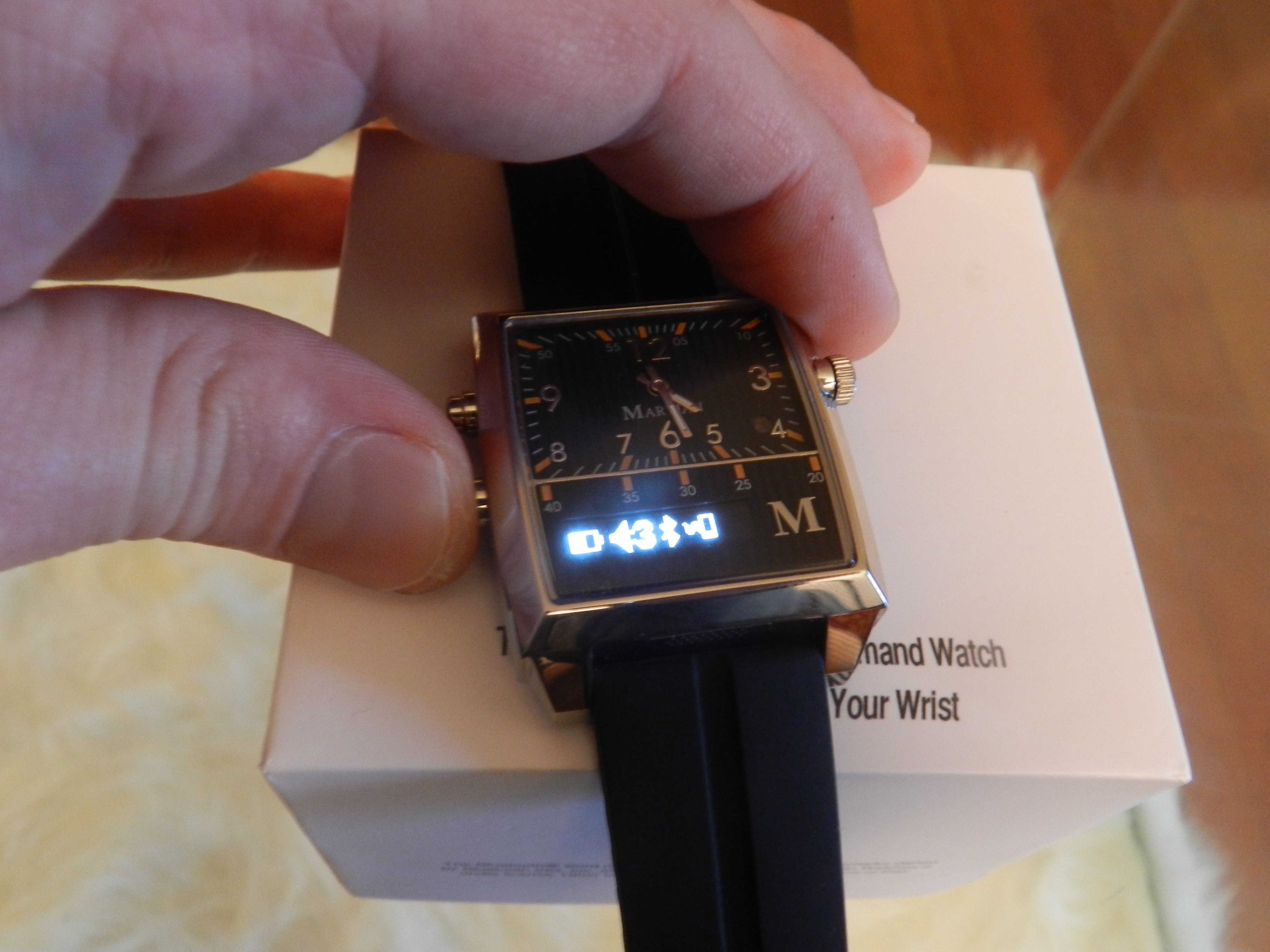 There were more than a few Bluetooth-enabled smart watches on display at CES this year. We were on-hand for the official press unveiling of the Pebble e-paper watch, which is expected to start shipping to over 80,000 backers later this month. We also spotted Martian Watches, CooKoo, I’mWatch, and a small handful of other watches designed to pair and work with your iPhone or other mobile devices. Many have seen the Pebble, up until now, as the frontrunner mainly due to the 10 million in funding it raised through Kickstarter. While rumor has it Apple is interested in creating a smart watch of its own, we will hear a lot more about smart watches in 2013 if CES is any indication. Over the past week and a half, I had the chance to put one of these smart watches to the test: the Bluetooth 4.0 “Passport” from Martian Watches.

A few things to note right off the bat: First, unlike the Pebble and I’m Watch, which integrate a larger display, the focus of Martian Watches is voice command. There is some debate whether a smart watch, one that the average iPhone user might use on a daily basis, should resemble an iPod nano-like touchscreen or a more traditional timepiece design. Martian Watches is going with the latter, but it integrates a small 96-by-16 pixel OLED display capable of displaying notifications and scrolling text for incoming messages and calls.

While Pebble and others hope to create an ecosystem of third-party apps that can run on small, touch-enabled displays, the name of the game is voice command for Martian Watches. That means, in the case of iPhone users, you’ll be able to activate and control Siri right from your wrist. It also means as Siri improves and adds more functionality, your Martian Watch does too. However, Martian packs some other non-Siri features that make it a true competitor to the other Bluetooth smart watches hitting the market…

If you can do it with Siri, you can probably do it from your Martian Watch. The only downside is that sometimes Siri displays visual information in responses that will not be viewable on your watch. Asking for next week’s weather forecast, for instance, will display a seven-day forecast typically, while asking for tomorrow’s weather will provide an audible response from Siri. It’s sometimes just a matter of rephrasing your question to get a response you can hear.

For commands, such as setting reminders, creating new text messages, nearby restaurants, and movie listings, you can for 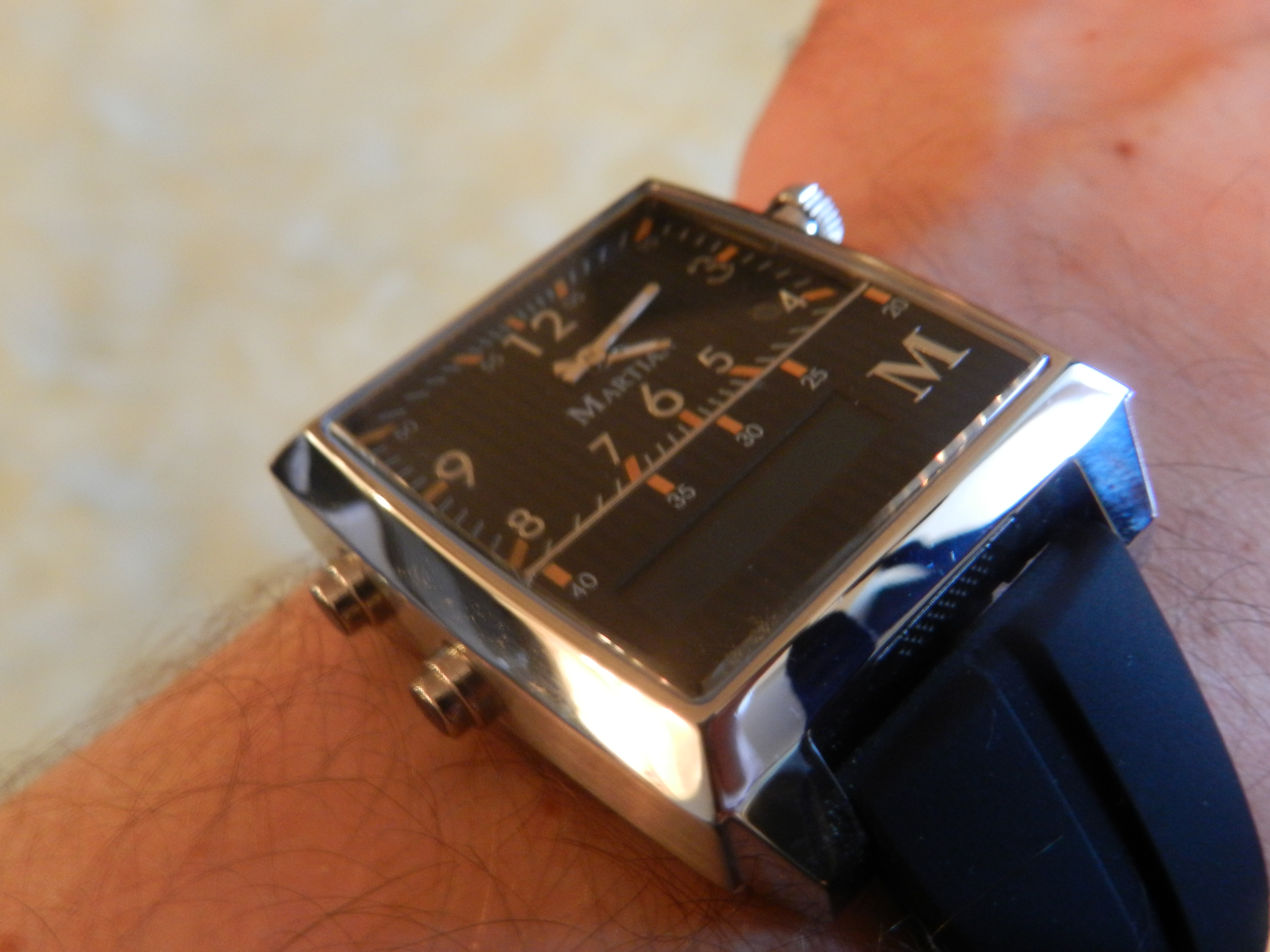 the most part, as highlighted in the video above, navigate the entire process from the watch. You’ll also be able to send tweets with Siri, ask to check email, etc., but Martian told us third-party app integration is coming via an iOS app (the app will be limited to just sending notifications from third-party apps to the watch initially).

Out of the box, Martian Watches have the ability to receive notifications for incoming calls and text messages (pairing is as easy as any other Bluetooth device). However, the upcoming iOS app will also enable notifications for third-party apps like Gmail, Twitter, Facebook, etc. As for the notifications themselves, text messages, for example, display the name of the sender followed by scrolling text for the first 40 characters. You can also ask to “read text,” if you would prefer to listen. The same goes for calls, with the name of the incoming caller displayed on the small OLED display. Vibrations—thanks to a “Light Touch” vibrating motor inside the watch— also accompany incoming notifications.

You can create and send new texts at any time just as you would with Siri. Activate Siri with a press of the top button and ask to “Send text to Mark,” for instance. You can also reply to incoming texts with a “reply” command. These types of commands worked flawlessly for me, and I didn’t have any complaints with the watch’s mic when interacting with Siri. Calling works the same way, but call quality is where I first ran into issues…

While placing calls is as easy commanding Siri to “Call Mike,” I ran into some issues with call quality once engaged in a conversation. The speaker provided quite clear and totally adequate calling on my end, but the person receiving my call often had a hard time hearing me. This problem isn’t as much of one in quiet environments, but I was sometimes forced to hold the watch closer to my mouth than I would have liked when outside and around a lot of background noise. Martian noted that excessive background noise on the receiving end “causes Martian’s microphone to think the person is speaking, which in turn cuts off your speech.” The call quality is noticeably reduced on the watch compared to your iPhone, but it wasn’t enough for me to stop using the device and was only a real issue on about 10 percent to 15 percent of calls.

Perhaps my favorite part of the Passport from Martian Watches is its aesthetic design. Having larger displays as the entire watch face, like the Pebble or I’mWatch, comes with a few benefits: larger text, customizable UI, easier content input, etc. However, it also forces you to walk around with an iPod nano-like gadget on your wrist, as opposed to a more traditional, formal watch design. The fact that Martian Watches is going for a more classic watch design isn’t an accident. They want you to be able to wear the Passport with a suit or during any formal occasion. That might justify the $299 price point (significantly more than the $150 Pebble). Some have theorized that a watch from Apple would aim for a similar blend of traditional watch aesthetics and functionality, despite the company selling many third-party watch band products for its sixth-gen iPod nano. Martian will also sell leather and stainless steel bands from its online store.

The Passport model I tried came in at 0.52 inches thick and 2.5 oz with a silicone band, and it wasn’t much thicker or noticeably uncomfortable compared to the designer watch I wear on a regular basis. Martian Watches will ship three models ranging from $249 to $299. All models have the same functionality, but the “Victory” and “G2G” models sport different designs:

It’s clear that Martian Watches rely on Siri, but that’s not necessarily a bad thing. As Siri updates with new functionality and languages, your Martian Watch does too. On top of third-party notifications with the iOS app, you’ll also get a camera mode for snapping images from your iPhone’s camera, a leash mode to alert you when you leave your iOS device behind, and gesture support for declining calls with a flick of your wrist. There is also an update mode, so more features could be implemented in the future. Martian quoted 2+ hours continuous talk time and 7+ days standby from a two hour charge, which seemed accurate given I needed one full charge towards the end of my 10+ days with the device. It also said the analog watch face will run for an additional 30 days.

You can pre-order all three models from the Martian Watches website now with the first shipments arriving sometime in February or March.