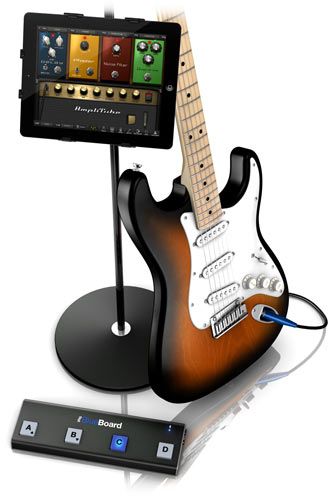 With NAMM press day kicking off in Anaheim today, iOS app and accessory maker IK Multimedia officially announced some of the products it briefly had on show during CES 2013. One of the more interesting products is the iRig BlueBoard. IK already has the iRig STOMP pedal, iRig accessories for connecting mixers, guitars, and mics to your iOS devices, but BlueBoard marks its first Bluetooth-enabled MIDI pedalboard designed specifically for iPhone, iPod, and iPad.

The pedal works with a dedicated BlueBoard app that will take the Bluetooth signal, convert it to MIDI messages, and then route them to any Core-MIDI compatible app on your iOS device or Mac. The result is the ability to control functions of an app, such as AmpliTube or JamUp Pro XT Amp Effects Processor, in the middle of a performance without having to fumble around your iOS device’s touchscreen. It will work with apps on your Mac, too.

It’s also possible to fully customize the MIDI messages that are sent out by the four switches and two optional expression pedals. It’s easy to setup iRig BlueBoard to control patch changes, effects parameters, reverb, delay on/off – or any parameter that can be controlled via MIDI. For a guitarist or vocalist using a mobile multiFX app like AmpliTube or VocaLive as a sound processor, iRig BlueBoard provides the foot-controlled functionality and convenience of a pedalboard, but with a form factor so compact and portable that it can easily slide into a backpack, a laptop bag or an instrument case.

iRig BlueBoard will be available for $99.99 in the second quarter of this year. IK announced two new “iLoud” portable studio monitors for musicians, as well.