Today is the first official day of NAMM in Anaheim, and we are already started to see a few Apple-related products pop up. The most interesting is the new lineup of interfaces from Apogee, including updated One, Duet, and Quartet models that all include new features, specs, and iPad compatibility with support for any Core Audio app. iPad compatibility comes thanks to Apogee’s new Maestro app:

Apogee’s new free Maestro app for iOS brings total hardware control to iPad. Designed to create a seamless transition between Mac and iOS, Maestro’s design was customized for each device; iPhone, iPad and Mac, ensuring an intuitive user interface across every platform. The app includes all the same essential functions available on the Mac including low latency monitoring. Maestro can be downloaded for free from the Apple App Store on your iPod Touch, iPhone, or iPad.

Starting with the One, the refreshed USB interface now features two inputs, the ability charge your iOS device, Apogee’s Maestro control iOS app, optional battery power, and updated mic preamps and AD/DA converters. It also includes a built-in mic and breakout cable to connect a 1/4-inch cable or XLR. One will be available in March for $349.

The new Duet, a four output, two-input USB interface has been given a refresh, and, like the One, it now includes a USB port for device charging and iOS connectivity. It also works with Apogee’s new Maestro iOS app, and it includes a full-color OLED display like previous versions. It will be available in February for $595. It also includes a breakout cable for XLR and 1/4-inch connections.

Lastly, Apogee is updating its 4 IN x 8 Out USB Quartet interface to take advantage of Maestro control software for iOS and Mac and offer full iPad compatibility. The refreshed Quartet will be available in February for $1,295, and a firmware update will bring iOS support to existing users at the same time.

The One, like the other updated Apogee interfaces, comes with a 30-pin cable, so you’ll need an adapter for Lightning devices.

Another iOS-related highlight from NAMM: Mackie’s new DL806 8-channel digital mixer for iPad (pictured below). It is available now for $799: 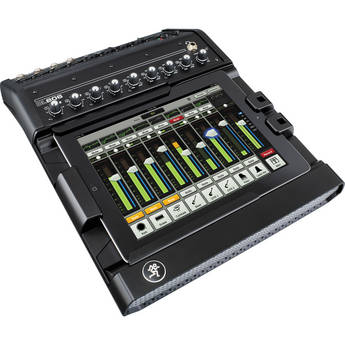