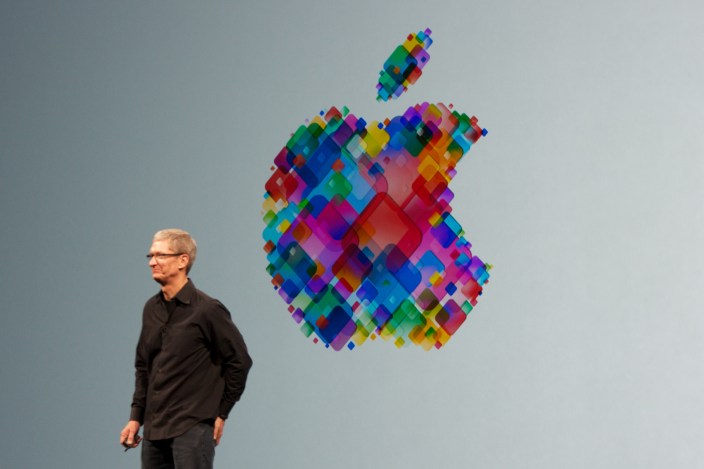 Last year, 2012, was Tim Cook’s first full year at the helm, and the first full year without Steve Jobs. It was a year filled with new products and advancements, but it was also a year of controversy, mounting competition from companies like Google and Samsung, and a year of a rising—and later falling—stock share price.

To address the last year and the year ahead, Apple CEO Tim Cook summoned corporate employees to his Cupertino Campus’s De Anza 3 auditorium. With the company’s top executives in the first row, followed by several rows of employees, Cook spoke in his signature black, buttoned, untucked dress shirt, jeans, and sneakers.

Cook was reportedly pumped up during this Town Hall meeting, rallying troops amid questioning from analysts regarding Apple’s future as a global technology titan. According to multiple people in attendance at the meeting, Cook rallied his staff by discussing Apple’s latest earnings, its competition, and its future.

Find all of the details after the break:

Cook addressed Apple’s Q1 2013 earnings report, which featured over 54 billion dollars in revenue, with pride. The CEO recognized the decline of Apple’s stock price, specifically in the days following Apple’s earnings announcement. With Apple floating between the world’s wealthiest and second richest company by market cap, Cook seemed unfazed by the recent drop in share price.

Speaking to employees on the current controversies around Apple’s income and future, Cook reportedly told his workers and colleagues that “we [Apple] just had the best quarter of any technology company ever.” Cook expressed this with immense satisfaction and appreciation for his teams that made this happen.

Cook further added, likely referring to gas and fuel juggernaut Exxon, that “the only companies that report better quarters pump oil.” “I do not know about you all, but I do not want to work for those companies,” Cook reportedly said. This portion of Cook’s talk reunited employees in disbelief over Apple’s stock price decline and restated how great of a company Apple is to work for.

Cook also reportedly made it clear that share price is not Apple’s focus. Making new products that customers love is the priority. Revenue and share price is just a by-product of Apple’s efforts. Cook said that he believes that Apple employees agree with that sentiment. He also said that Apple is commonly misunderstood and that the company will always have critics, no matter how successful it is by Apple’s standards.

On the note of working for Apple, Cook also announced a new employee discount perk. Apple, for a while, has offered its employees an EPP (Employee Purchase Plan) that provides discounts on various Apple products. Now, an expansion of the EPP program will include discounts on unlocked versions of the iPhone. This new offer will become available this upcoming Monday.

During the meeting, Cook also announced that some of Apple’s latest products, including the constrained iMacs and iPad minis, would soon become available for discount. People familiar with the matter have said that Apple expects to reach supply and demand balance for the new iMacs and iPad mini in the next couple of months. Cook reiterated the current product constraints during the Q1 2013 earnings call.

As we reported last year, Cook initiated $500 Mac and $250 iPad discounts for employees. The new extended discount program is just the latest addition to a slew of new employee perks that have taken off during the Tim Cook era. Other recent additions include a “Blue Sky” program for side projects, a free 50 gigabytes of iCloud storage, a charitable donation matching program, and a beautiful new glass award for employees that celebrate a decade of work at Apple.

Cook also reiterated that Apple is working to move manufacturing of one of its Mac lines to the United States by the end of the year. Cook addressed that moving Mac production to America was not a PR move, but a move to increase production of Apple’s computers. Cook said that Mac sales were low in the quarter because Apple could not manufacture enough Macs. The company reportedly sold every Mac that it could build. Most of Apple’s Mac line was updated in the past few months, which naturally would make units high in demand, but low in supply (for the time being). Moving a Mac’s production to the United States could help with that.

With Apple’s growing reliance on cloud services and the data farms that come with that, Cook also announced that Apple will be moving to 100% renewable energy for all of its data centers by the end of 2013.

As a core part of his business, Cook also discussed Apple’s retail group. Cook reportedly solemnly recognized the apparent drop in the satisfaction of retail employees during the recent, short John Browett-run period. Cook said that Apple is working hard to focus on rapidly improving the happiness of its retail employees. This is a major focus for Cook and the rest of the Apple leadership team. The same goes for maintaining and growing customer satisfaction in Apple Stores.

Apple’s retail sector has been a controversial one as of late with the recent departure of Retail Vice President Jerry McDougal and last year’s firing of Senior Vice President of Retail John Browett. Apple employees are yearning for retail to be as pleasurable as a job as it was during the Ron Johnson era.

Since the departure of Browett, Cook has acted as the top manager for all retail matters. Steve Cano, Bob Bridger, and McDougal (up until his departure) have all worked directly under Cook. In recent weeks, Apple Finance VP Jim Bean has made additional contributions to the retail team. Apple previously said that Bean would move from the Finance group to the Retail team.

Attendees at the meeting noted that Cook said Apple’s search for a new head of retail is still active. Cook said that Apple is looking for an executive who understands how Apple does retail. This means a principle focus on employee and customer satisfaction.

Apple retail employees continuously preach their appreciation of Steve Cano. Cano is an Apple retail executive that began at Apple as a retail store manager. He is believed to do his work in the image of Apple retail pioneer Ron Johnson, and Cano is seen as a strong advocate for the people who work in Apple’s 400 stores around the globe. It is currently unclear if Cano is actually one of Cook’s options for the top retail job.

Cook mentioned Apple’s large iOS web traffic in comparison to Android’s smaller web marketshare. He noted that while Android may be running on more devices, it is clear that people love and use their iOS devices more than the people who use Android-based products. Cook mentioned the key statistic that far more people used iOS devices to purchase items this past Black Friday than with Android devices.

Cook also noted that Android is about marketshare with its range of devices and low pricing, while iPhone and iPad products are about experience, top hardware and software quality, and, most importantly, actual usage by customers.

Notably, Cook reportedly said that if Apple’s iPhone division was stripped out of the company, it would be a top corporation that is more successful than Microsoft in its entirety. Cook also reportedly added that most of Apple’s divisions, if they were individual companies, would make the Fortune 100 list. At a 2010 Mac media event, Cook used similar math to note that Apple’s Mac business, if removed from the company, would be one of the top firms on the Fortune 500 companies list. Of course, as Cook jokingly said at that media event, Apple has no plans to spin-off divisions.

Cook reportedly also discussed China as a crucial, growing “hyper-market” for Apple. Cook noted that growth in China is exceeding that of the U.S. He also noted the importance of other emerging markets. He reportedly noted how much the Chinese population adores Apple’s products. With long lines, counterfeit “Apple Stores,” record-breaking sales numbers, and even egg-throwing by impatient line-waiters, this is clearly the case.

Cook’s meeting with employees seemed to have reaffirmed Apple’s strength as the leading technology company to its employees. The common theme recognized by Apple employees is the immense strength, experience, and foresight of Apple’s management team. More than ever, employees are witnessing how much their CEO and management cares about them and both the near-term and long-term success of Apple on a global scale.