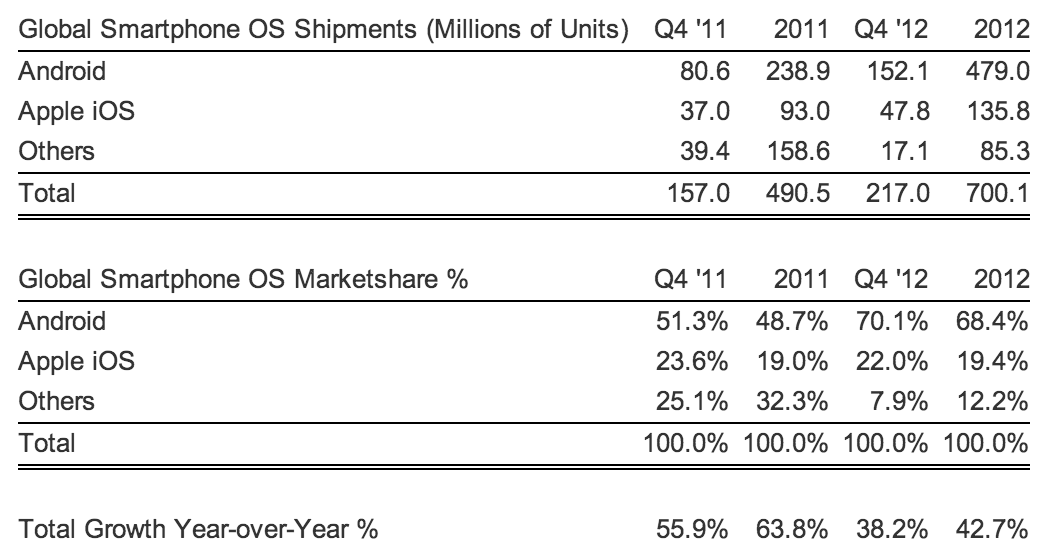 According to the latest numbers from Strategy Analytics that measure global smartphone operating system shipments and marketshare for the fourth quarter of 2012, iOS and Android together accounted for 92 percent of all shipments. Both iOS and Android were able to significantly increase market share over Q3, while global smartphone shipments over the entire year reached a record 700.1 million units.

As for iOS, Apple grew 29 percent annually by selling 135.8 million iPhones throughout the year. The company captured 22 percent of the market in Q4, down from the 24 percent it held in the year-ago quarter, and its share of the smartphone market for the year comes in at 19.4-percent. According to Strategy Analytics, that is up slightly from the 19 percent it took during 2011.

With the “others” category shrinking from 32.3-percent of the market in 2011 to just 12.2-percent in 2012, Android was able to post the largest gains jumping to 70.1-percent of the global market during the fourth quarter from 51.3-percent a year ago. The other category of course includes other platforms, such as BlackBerry, Symbian, Bada, and Windows, all of which together only grabbed 7.9-percent of the market in Q4 2012. That’s down from 25.1-percent in Q4 2011. Android’s gains are clearly at the expense of the “others,” as Apple continues to slowly gain marketshare as well.

As always, Strategy Analytics’ report includes shipment estimates for Android numbers—as opposed to the hard sales numbers used for iPhone. We know Apple sold 135.8 million iPhones during 2012, while the report estimated Android shipments at 479 million units shipped (not sold) for the year.

“Apple grew 29 percent annually and shipped 47.8 million smartphones worldwide for 22 percent marketshare in Q4 2012, dipping slightly from 24 percent a year earlier. Combined together, Apple and Android accounted for a record 92 percent share of all smartphones shipped globally in the fourth quarter of 2012. The worldwide smartphone industry has effectively become a duopoly as consumer demand has polarized around mass-market Android models and premium Apple designs