App Store earning over 3.5 times as much as Google Play with record revenue in December 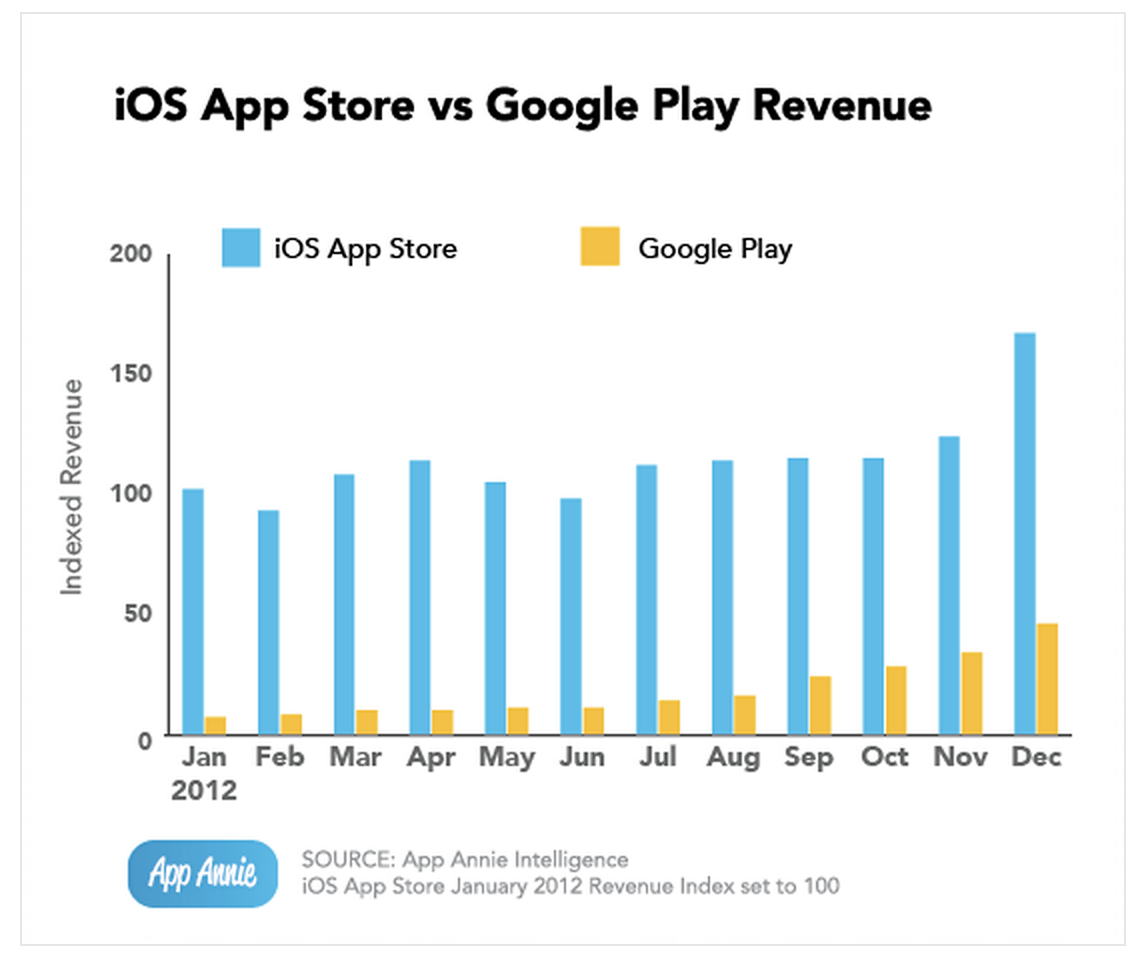 App Annie is out today with its January 2013 index that covers revenue from mobile app sales in the App Store and on Google Play. While Apple was able to hit record revenues in December, increasing revenue by one-third during the month and growing by one-fifth from Q3 to Q4, Android posted even stronger growth by doubling revenue quarter-over-quarter. Despite stronger growth for Android, according to the report, the App Store earned 3.5 times as much revenue as Google Play during December 2012. Bloomberg noted that App Annie doesn’t provide exact figures for revenue, as it currently sells that data, but the report provided a break down of revenue by country and publisher. Apple has previously said the App Store brought in around $333 million per month between June and December.

iOS App Store revenue grew by about one-fifth from Q3 to Q4. In particular, it achieved record revenues in December, as monthly revenue increased by about one-third from November to December 2012; this gain surpassed even the standout revenue increase from November to December last year. As highly-desired holiday gifts in many countries, new iPhones and iPads (including the recently launched iPad Mini) typically lead to a jump in app downloads, and consequently, app revenue.

When it comes to revenue by country, App Annie said that United States, Japan, United Kingdom, Australia, and Canada continued to account for 60 percent of App Store revenue in Q4. However, China experienced significant growth during the quarter:

China moved from the eighth slot to the seventh in October, and is now the sixth-ranking country as of December. Given its recent growth rates and its population size, China’s eventual revenue potential for the iOS App Store cannot be ignored. In fact, as Tim Cook mentioned in Apple’s last earnings call, China now represents their second largest region and has demonstrated the highest growth rate (for Apple overall, not just for the iOS App Store). With his plans to increase Apple’s focus in China, we can likely expect to see further growth there.

App Annie also provided a break down of the top publishers with Apple coming in the top spot for monthly downloads on the App Store and Electronic Arts for monthly revenue: