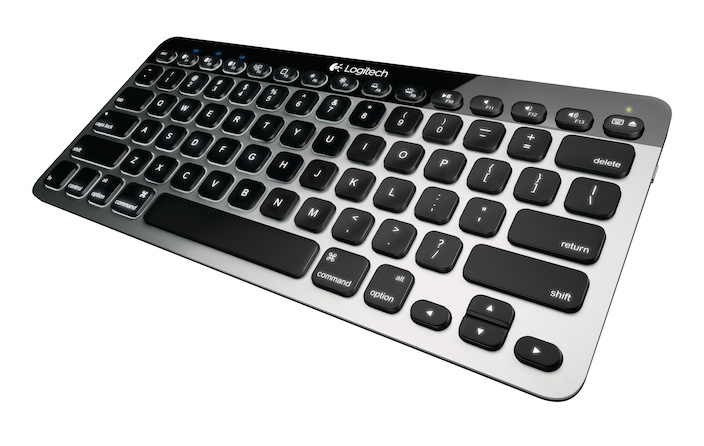 It’s no secret that we’re big fans of Logitech’s Mac peripherals here and we really couldn’t wait to get our hands on their latest piece of kit, the ‘Logitech Bluetooth Easy-Switch Keyboard K811 for Mac/iPad/iPhone‘ ($99 Amazon). I’ve used this keyboard for almost a month now and can heartily recommend it but for a variety of different use cases than a typical keyboard.

The Logitech Bluetooth Easy-Switch Keyboard K811 is about the size of Apple’s Wireless Keyboard with a shallower angle – something similar to what you are used to if you use a MacBook. In fact the similarities don’t stop there. Instead of adopting Apple’s desktop keyboards’ white, non-backlit keys, Logitech’s Easy-Switch keyboards look a lot like Apple’s MacBook Keyboards with backlit black keys on a brushed aluminum. Note in the images below how the Logitech starts a little higher at the bottom and ends up much lower. That gives the typist a much smaller angle and something closer to what you’d expect on a MacBook Pro/Air. 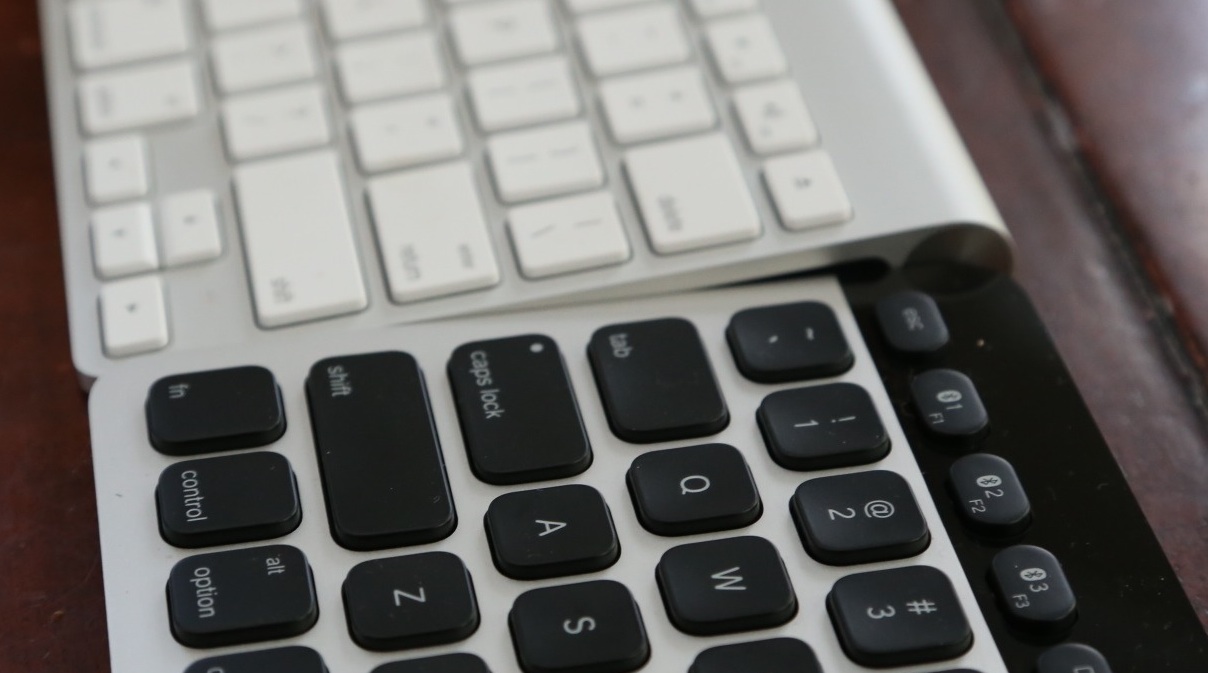 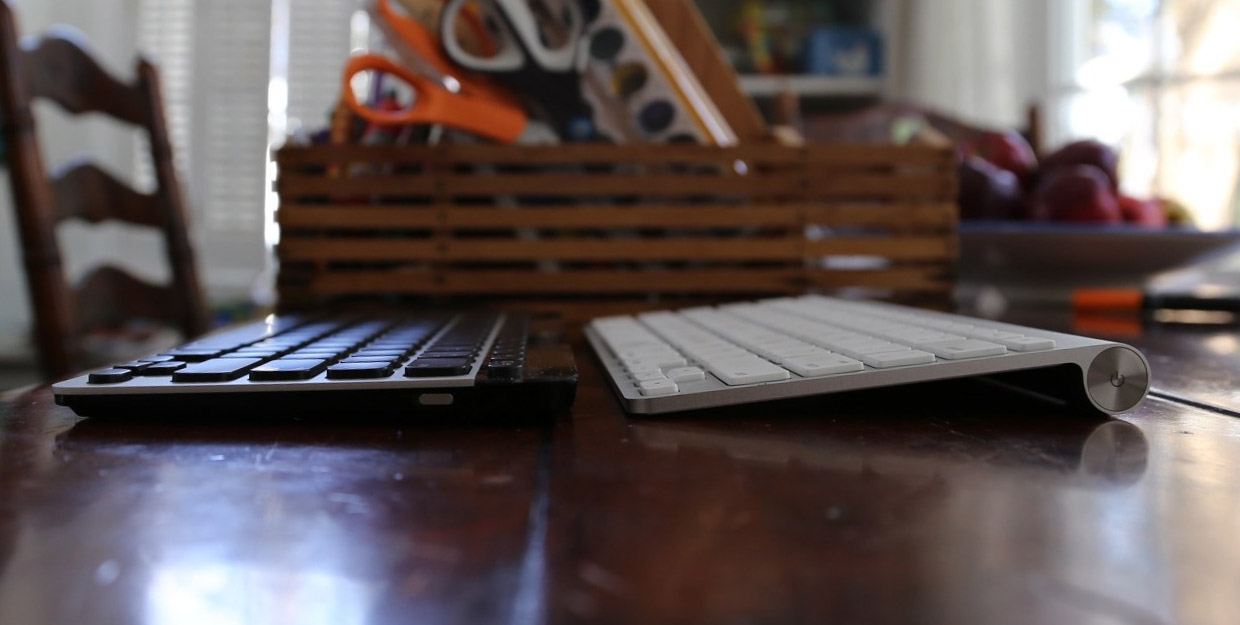 There are a few important differences that make Logitech’s offer something to consider.

The best feature and the biggest differentiator is that you can easily switch between three Bluetooth devices.   Sure you can attach any Bluetooth keyboard to any number of devices, but you must manually pair them each time you switch (and shut down the previous connection).  Not so with Logitech’s aptly-named “Easy Switch”. You can pair three different devices and quickly switch between them with the push of a top row function button.

In testing this actually works as it should. Our family ended up using the Easy-Touch in the TV room almost exclusively. When my wife wanted to type up a long email on her iPad, she’d just grab the keyboard, hit the #2 Bluetooth and type away.  When I wanted to put together a draft blog post idea onto my iPhone, I hit the #1 Bluetooth switch. The #3 switch was reserved for the Apple TV now that it accepts input from Bluetooth keyboards.

This is why the Easy Switch topped 9to5Mac’s best keyboards for Apple TV.

That’s right, I barely got a chance to use it on my Mac. (Not true really I tested it on the Mac and it works just fine – in fact, I’m typing this review on the Easy-Switch). 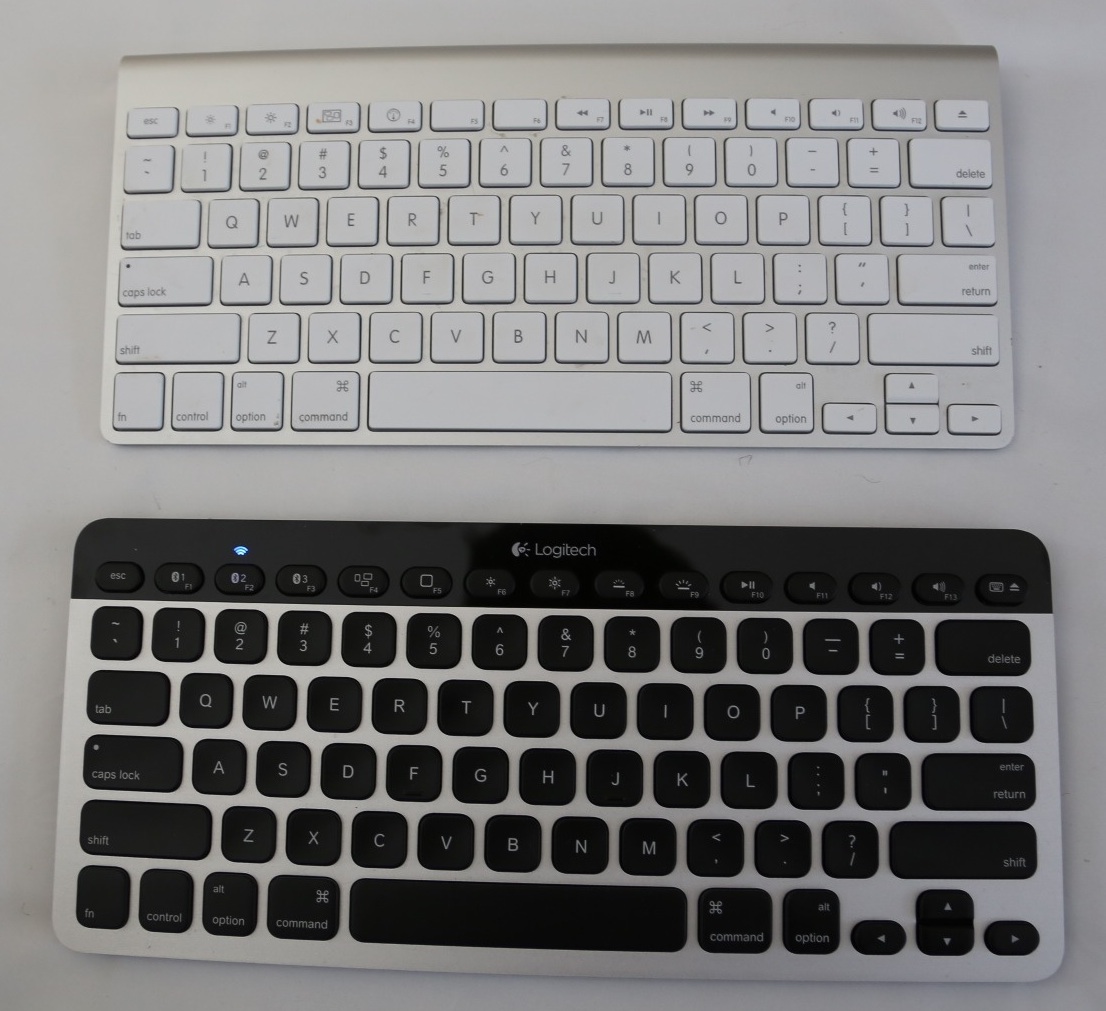 The Easy-Switch has some other advantages over Apple’s default models. It is significantly lighter than Apple’s Wireless keyboard. Backlit keys are ‘key’ for typing at night – for instance while watching TV, in bed or even if you are using your iPad on a Red-eye. The illumination happens when you need it thanks to motion-sensing technology which then turns the backlighting off when you aren’t using it (saving battery life). This is a great feature but I sometimes found I’d have to actually type a letter for the backlighting to come on. Also, it has adjustable brightness but I find it always goes back to default lighting after turning off and on (I like it all the way up). Small gripes. 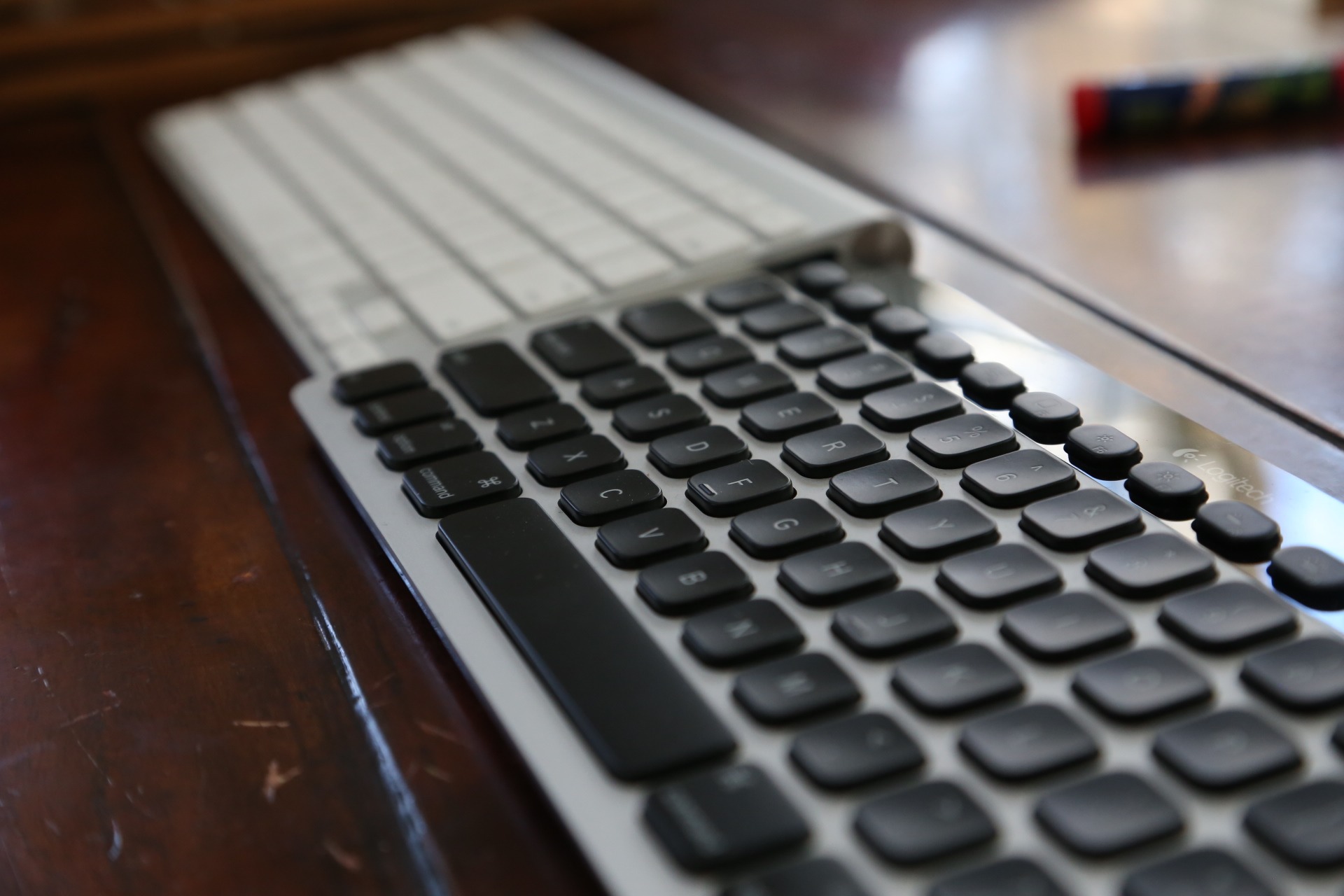 Maybe the nicest advantage to this keyboard is that it is rechargeable via micro-USB rather than taking AA batteries like Apple’s Wireless Keyboard. I found that I would need to replace the batteries in Apple’s Keyboard every few months. By contrast, I’ve had the Logitech, backlighting and all, for almost a month and I’ve only charged it once (and it wasn’t even asking for a recharge).

The keyboard itself is slightly different from an Apple keyboard which takes just an ever so slight amount of getting used to. Logitech explains it like this:

The bottom line for me is that it looks and feels a lot like my MacBook Pro which I type on 95% of the time. The keys are more concave and slightly smaller which yields better spacing but for the most part any difference isn’t noticeable. The ‘PerfectStroke system’ might as well be called the ‘MacBook Pro system’ because it feels very similar – which is to say great.

Overall, the Logitech Bluetooth Easy-Switch Keyboard K811 is the best keyboard I’ve found so far for the growing amount of Apple devices in my household that utilize a Bluetooth keyboard. We no longer need  separate keyboards for each Apple device that we have (which are growing ever more popular), it is light, rechargeable and has backlighting. Apple should make this keyboard.