The New York Times is back with the curved glass iOS iWatch story (U: WSJ too) 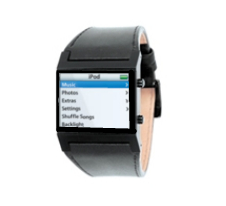 According to a report from Nick Bilton from The New York Times, citing people close to the situation, Apple is currently in the process of developing a wristwatch that utilizes curved glass. This isn’t the first time Bilton has reported that Apple has wearable devices in the works, and there has recently been many rumors that Apple could indeed compete with a Bluetooth watch of its own. In December 2011, Bilton reported that a small group of people at Apple were “conceptualizing and even prototyping” wearable devices. The group was likely lead by wearable computer expert Richard DeVaul at the time, and it was said to be prototyping a “curved-glass iPod that would wrap around the wrist.” DeVaul jumped ship to Google in 2011, but Bitlon said Apple is pushing ahead with its bendable iOS wristwatch.

In today’s report, Bilton claimed the watch would run iOS and stand out from the competition due to Apple’s unique process of implementing curved glass in wearable form factors:

In its headquarters in Cupertino, Calif., Apple is experimenting with wristwatch-like devices made of curved glass, according to people familiar with the company’s explorations, who spoke on the condition that they not be named because they are not allowed to publicly discuss unreleased products. Such a watch would operate Apple’s iOS platform, two people said, and stand apart from competitors based on the company’s understanding of how such glass can curve around the human body.

Late last week, following sketchy reports in December about Apple allegedly collaborating with Intel on a Bluetooth smart watch, Apple employee #66 and founder of the company’s Human Interface Group, Bruce Tognazzini, published an interesting article on the potential for a watch to “have a profound impact on our lives and Apple’s fortunes.”

Today, Bilton seemed to speculate that Corning’s new flexible glass could play a role in an Apple watch. CTO of Gorilla Glass-maker Corning, Pete Bocko, told the New York Times that its bendable Willow Glass is finally ready for primetime:

“You can certainly make it wrap around a cylindrical object and that could be someone’s wrist,” Mr. Bocko said. “Right now, if I tried to make something that looked like a watch, that could be done using this flexible glass.” But Mr. Bocko warns that it is still quite an engineering feat to create a foldable device. “The human body moves in unpredictable ways,” he said. “It’s one of the toughest mechanical challenges.”

We also made our case for a Bluetooth 4.0 iPod nano watch in 2011 discussed last month what it might take for Apple to make the product a reality.

Update: The Wall Street Journal has weighed in with more information on Apple’s watch prototypes:

Apple Inc. is experimenting with designs for a watch-like device that would perform some functions of a smartphone, according to people briefed on the effort. The company has discussed such a device with its major manufacturing partner Hon Hai Precision Industry Co.

Foxconn, as Hon Hai is known, has been working on a spate of technologies that could be used in wearable devices, one of these people said. In particular, the Taiwan-based company has been working to address the challenges of making displays more battery-efficient and working with chip manufacturers to strip down their products. The technologies are aimed at multiple Foxconn customers, this person said.