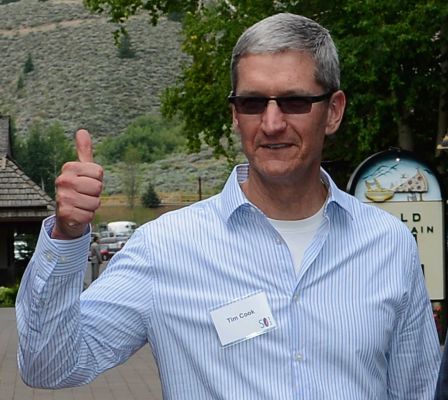 This morning, during his talk at the Goldman Sachs conference, Apple CEO Tim Cook discussed tablet market share, acquisitions, iPhone screen sizes, and much more. Another topic of conversation was retail, which Cook was very enthusiastic about. While noting that Apple Stores have become gathering places and play an important role in communities, Cook said he’s “not even sure store is the right word anymore.”

I don’t have very many bad days. But if i ever feel I’m dropping down from an excited level, I go in a store and it instantly changes. It’s like a prozac. It’s a feeling like no other.

He also explained that many Apple stores aren’t big enough and the company plans to move 20 retail locations into bigger spaces during 2013. Also on tap for this year is 30 new Apple stores, mostly outside of the United States. One of those stores is Apple’s first in Turkey, and that brings the total number of countries with Apple stores up to 13. Cook’s full quote on retail below:

There store acts as a gathering place. It’ a place that has an important role in the community. If you look at an agenda for an Apple store on any given day, you might find that there’s a youth program going on. You might find a local musician entertaining people in that store. It’s incredibly exciting what these stores do. I’m not even sure store is the right word anymore. They have taken on a role much broader than that. They are the face of Apple for almost all of our customers. People don’t think about the Cupertino headquarters, they think about the local Apple store. Last quarter, we welcomed a 120 million people in our stores. It’s so huge that some of our stores aren’t big enough. We’re closing 20 of our stores, moving them, and making them larger this year. In addition to that 20, we’re adding 30 more… disproportionately outside the U.S. First store in Turkey gets us into 13 countries.

I don’t think we would have been nearly as successful with iPad if it weren’t for our stores. It gives Apple an incredible competitive advantage. Others have found out it’s not so easy to replicate. We’re going to continue to invest like crazy. The average store last year was over 50 million in revenue.