ZAGG, an accessory maker that first received a lot of attention for its super-tough invisibleShield screen protector, these days also happens to be making some of the best iPad keyboards around. While ZAGG has big competition from the likes of Logitech and Belkin, its earlier folio and keyboard cover designs have been among our most recommended keyboards for iPad. ZAGG’s latest creations are not only its first dedicated to Apple’s smaller iPad mini, it’s also a new design for the company that helps set it aside from much of the competition.

The first thing that makes ZAGG’s iPad mini keyboards stand out is the company’s decision to sell two models: the ZAGGkeys Mini 7, and a slightly larger keyboard dubbed the Mini 9. ZAGG’s giving you the ability to get a keyboard only 10 percent smaller than a traditional Apple keyboard and built into a solid, good-looking iPad mini case, which something most of the other guys aren’t providing.

Unlike Logitech, Belkin, and others that have gone with the Microsoft Surface-style, magnetic, clip-on keyboard covers, the new Mini 7 and 9 go with a more traditional, folio case design.

First, a few things that are the same about the Mini 7 and Mini 9: 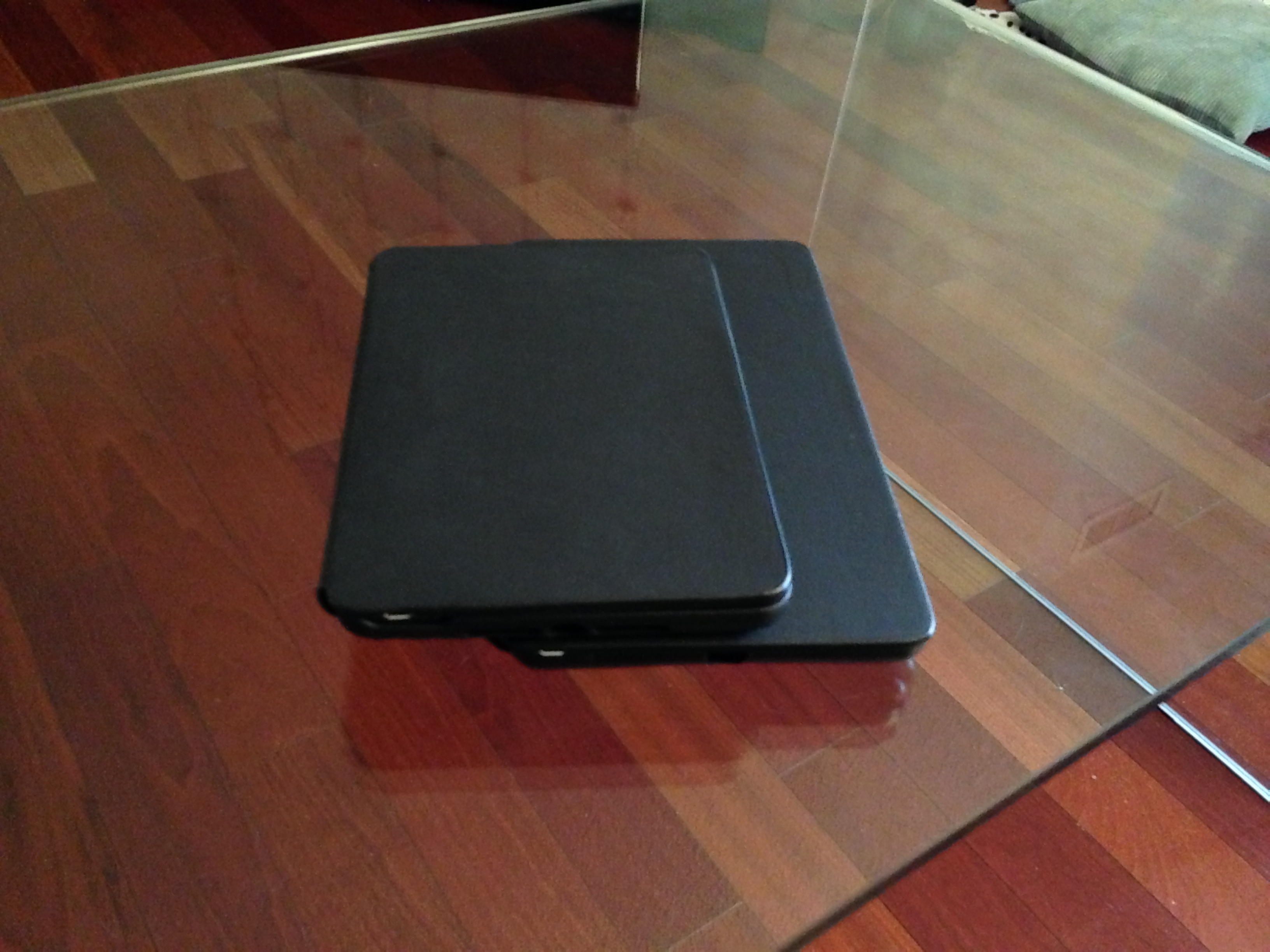 The design – The matte, rubberized finish covering the entire exterior is easy to grip and soft enough that it almost feels like faux leather. Moreover, the slightly lighter, charcoal black color blends nicely with any of the exposed slate iPad mini, providing a nice blackout effect. Fortunately, with super snug fitting openings as pictured below, not much of the iPad’s backside is exposed anyway. While that soft, light black finish feels nice in the hand, it isn’t exactly resistant to blemishes. You’ll likely experience light scratching at some point, but you won’t have to worry about cracks and get moderate impact protection from the rubberized exterior. I love the finish compared to the shiny plastic material prone to cracks that much of the competition is using. However, the larger Mini 9 actually uses a different, harder plastic material on the inside of the case where the iPad rests (likely for added support). It’s still coated in the same rubber finish as the 7, but the plastic makes the 9 feel noticeably cheaper. 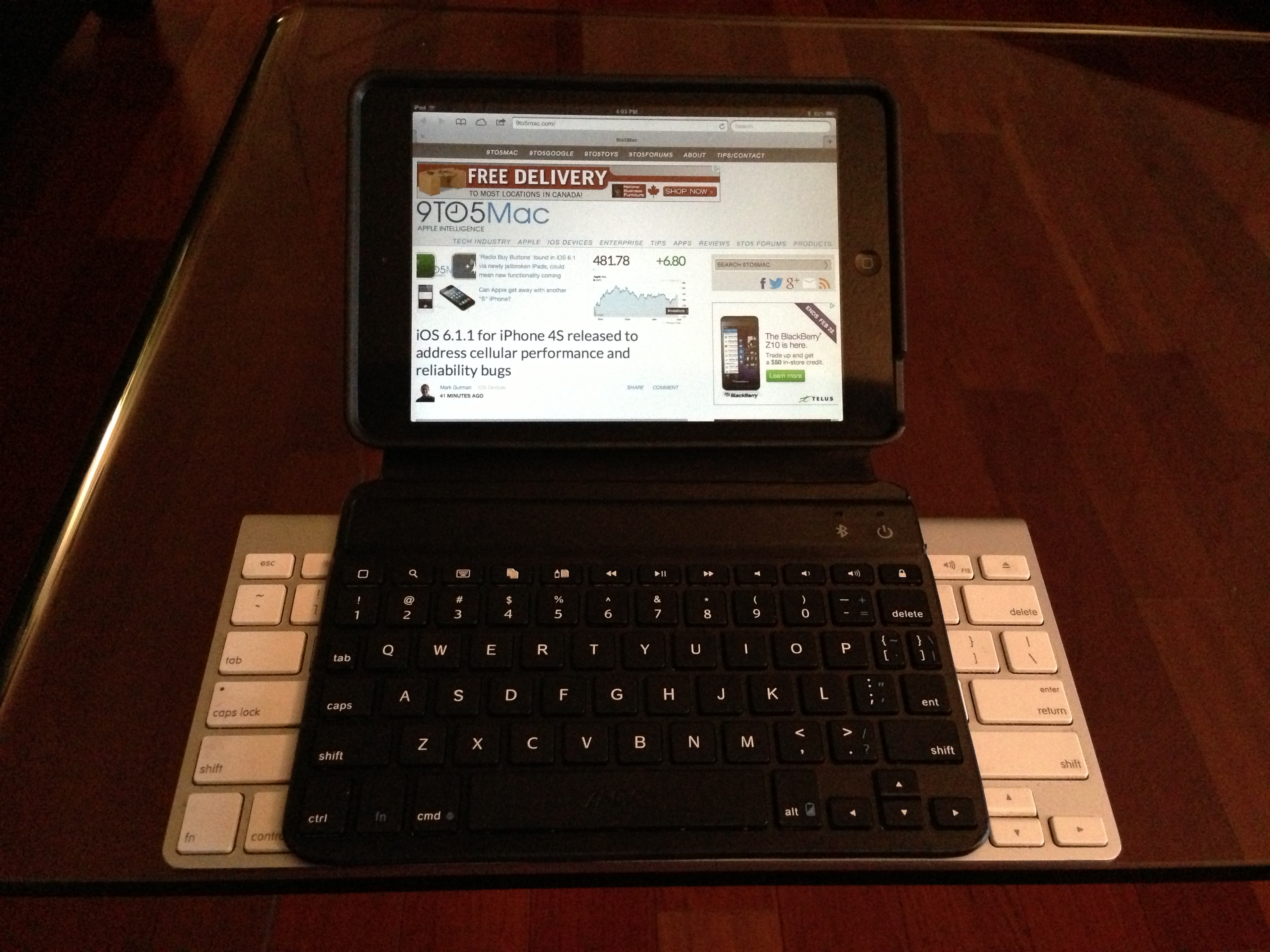 The keyboard – I hate when a keyboard feels unstable. Other iPad keyboard cases I’ve tested felt flimsy, as if the material of the case wasn’t stiff enough to support the keyboard. That problem gets worse with keyboards that use the case itself, and not a kickstand, to prop up the iPad (like Logitech’s solar keyboard or ZAGG’s own PROfolio+). The good news is that’s not an issue with the Mini 7 and 9, as to be expected from ZAGG. When handling the Mini 7 and Mini 9, it feels like a solid unit as opposed to the keyboard swinging open and hanging freely. The solid build doesn’t come at the expense of too much extra weight fortunately with the Mini 7 coming in at 10.5 ounces. The Mini 9 comes in at 12.7 ounces, and that admittedly made the larger model a little more unwieldy thanks to lack of a magnetic enclosure… 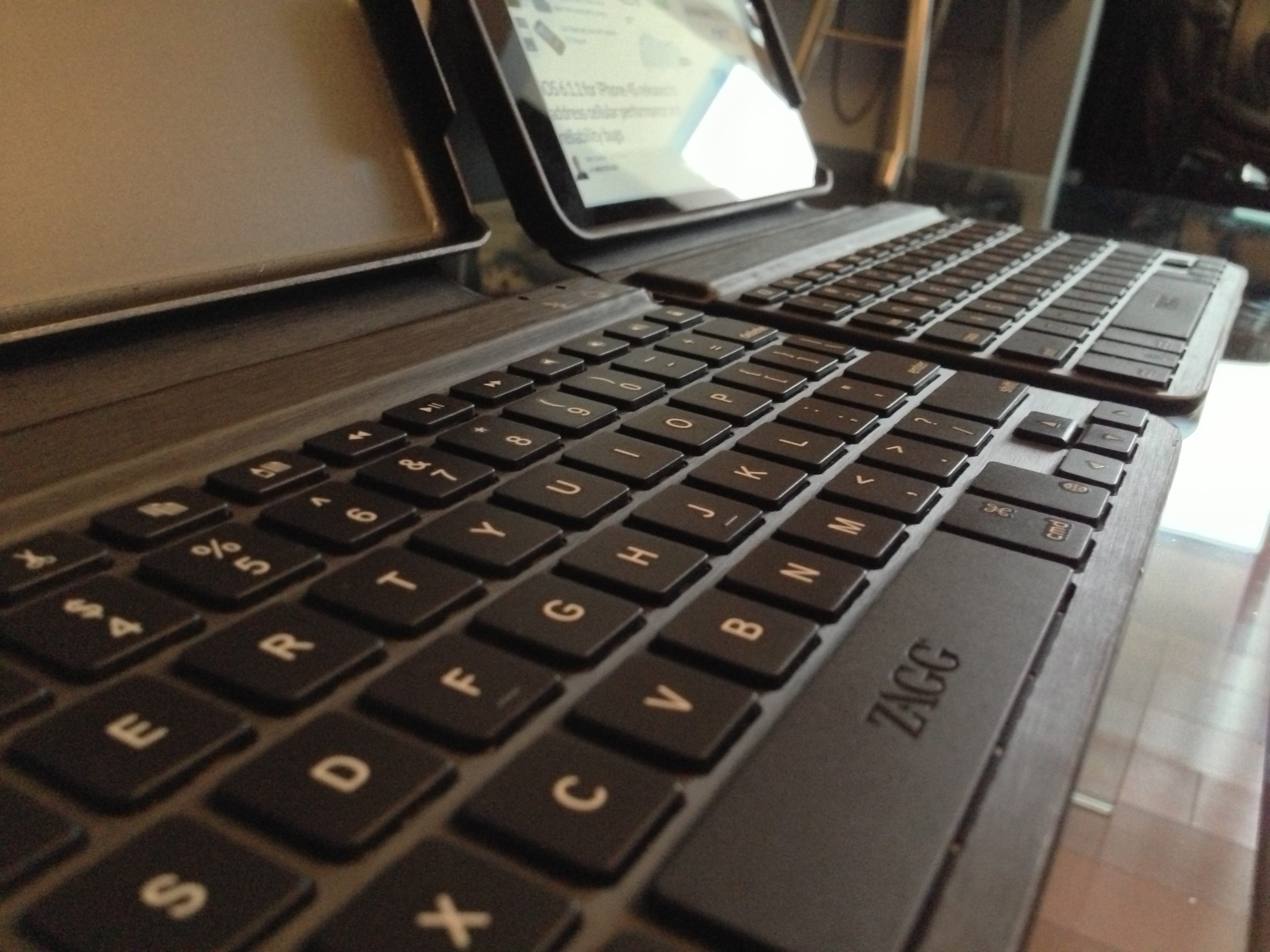 Perhaps the best part about ZAGG’s keyboards is the keys themselves. ZAGG’s keys to me always felt the closest to the feel of a MacBook, and I had the same impression with the Mini 7 and Mini 9. While many of the other iPad mini keyboards, including Logitech’s Ultrathin offering, use slightly larger keys with less space between each one, ZAGG’s keys are slightly smaller and more spaced out. The result is a keyboard that feels much more like the Apple or MacBook keyboard you’re used to, and I prefer this approach. It also means the keys are slightly smaller to accommodate the layout, but I didn’t have an issue making the transition from both my MacBook keyboard and the 9-inch keyboard case I use with my 9.7-inch iPad. The Mini 9 feels even less cramped than the Mini 7, and it adds extra function keys and larger keys for Enter, Shift, Caps lock, etc.

The cases both provide auto wake/sleep when opening and closing the cover, which at this point is a must-have feature for me. It doesn’t however, have magnets to simply keep the case itself closed. Fortunately, lack of a magnetic closure isn’t as noticeable with the solid case design. I didn’t have a problem with it swinging open, although I’d still like to have that feature for extra peace of mind. It was a bit more of an issue with the heavier Mini 9, which, as I became more comfortable with the Mini 7’s tighter key layout, didn’t seem as necessary. 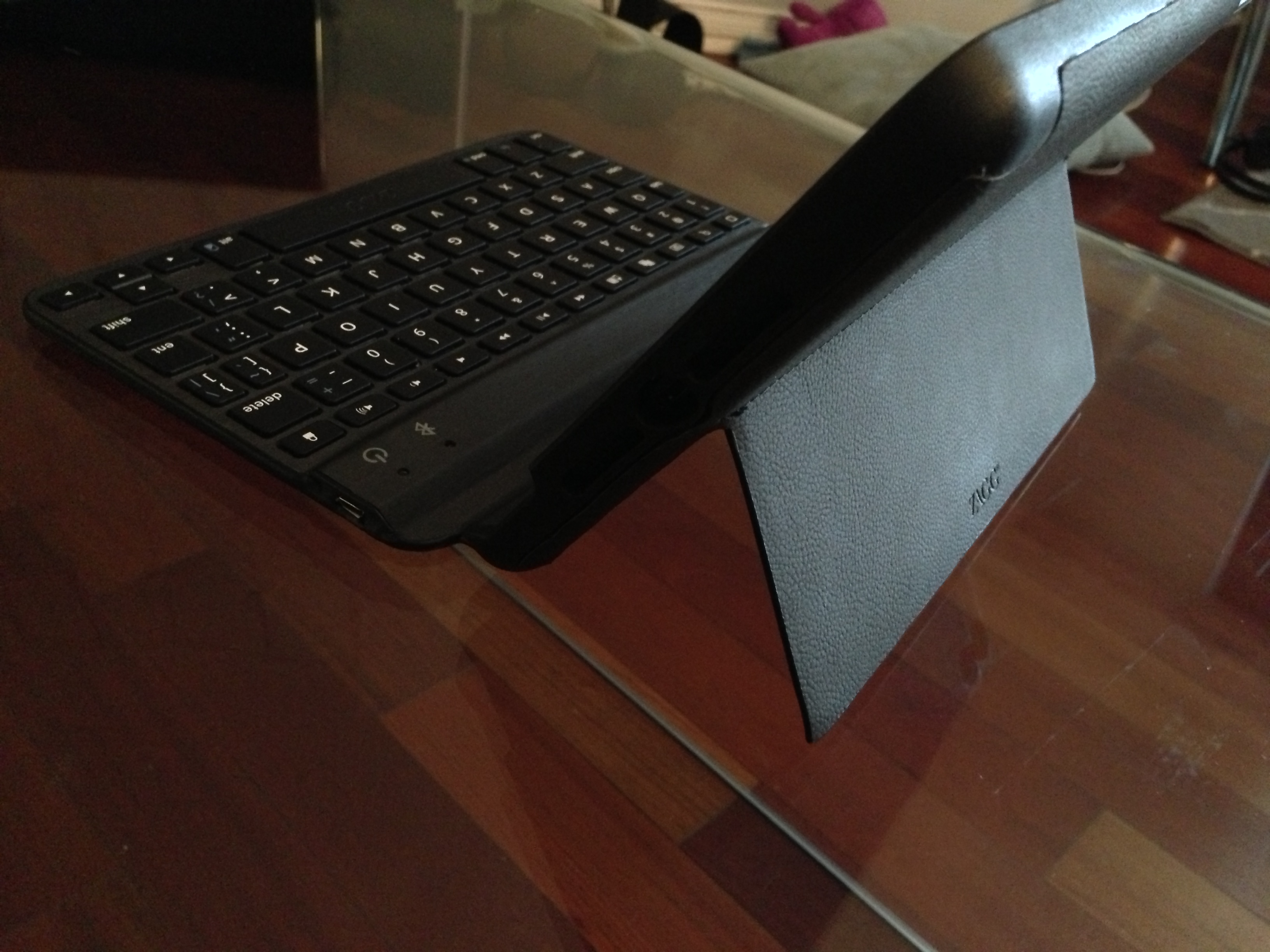 The kickstand – Many case makers have decided to integrate the stand for their keyboard cases into the case itself. I’m not a big fan of this, as explained above, so I’m glad ZAGG decided to put a dedicated kickstand on the back of the Mini 7 and Mini 9. It’s finished in the same matte, rubberized material and stays tucked away nicely with magnets when not in use.

No backlight – Another thing that you don’t get with ZAGG’s Mini keyboards is the backlight it puts in its PRO model keyboards for iPad 3 and iPad 4.

Battery – Some reviewers have found the battery in the cases less than great. ZAGG didn’t quote any specific specs, but it said the “built-in rechargeable lithium polymer battery will keep the keyboard powered for months at a time.” After a full charge, I didn’t have to charge the keyboards again during the month I spent with them. Needlessly to say, battery life shouldn’t be an issue, and most iPad keyboards these days offer 150 hours of active use.

The real difference with the Mini 9 option is the ability to get a larger keyboard that doesn’t conform to the iPad mini’s smaller form factor. With the Mini 9 model, you essentially receive a keyboard with spacing and keys comparable to a full-sized iPad keyboard at 9.63 inches in length. In fact, it provides 90 percent the space of a traditional Apple keyboard. Most keyboard makers, ZAGG included, reduce the size of buttons, space between them, and combine function keys to shrink down to the iPad mini’s smaller form factor. While that’s not an issue with the Mini 9 due to its larger size, it also means the flip side of the case (the one holding the iPad itself) doesn’t snugly fit the iPad. As pictured above, this leaves a small gap on either side of the iPad mini, which isn’t aesthetically pleasing to me. ZAGG makes a stylus that will store away nicely in one of the gaps, but that seems like a bit of an after thought. The Mini 9 also means you’re carrying around a unit significantly longer than the iPad mini itself.

Personally, I didn’t find the Mini 7 inhibiting my typing experience enough to warrant carrying around the larger and less refined 9-inch model. For someone like me, who was coming from a full-sized iPad keyboard, the shrunken down and doubled-up function keys weren’t a roadblock, and it was a very short learning curve to get comfortable typing. Any sizing and spacing difference between most of the keys wasn’t noticeable. That being said, if a 9-inch keyboard for your iPad mini sounds enticing, ZAGG provides one of the only high-quality iPad mini keyboard cases available that also pack in a nearly full-sized, 9-inch iPad keyboard.

The ZAGGkeys Mini 7 and ZAGGkeys Mini 9 usually sell for $89.99 each through ZAGG’s website and slightly less on Amazon. However, for a limited time, ZAGG is offering both models for 50 percent off on its website.