Review: Logitech’s Ultrathin Keyboard for iPad mini is like a Smart Cover with a built-in keyboard 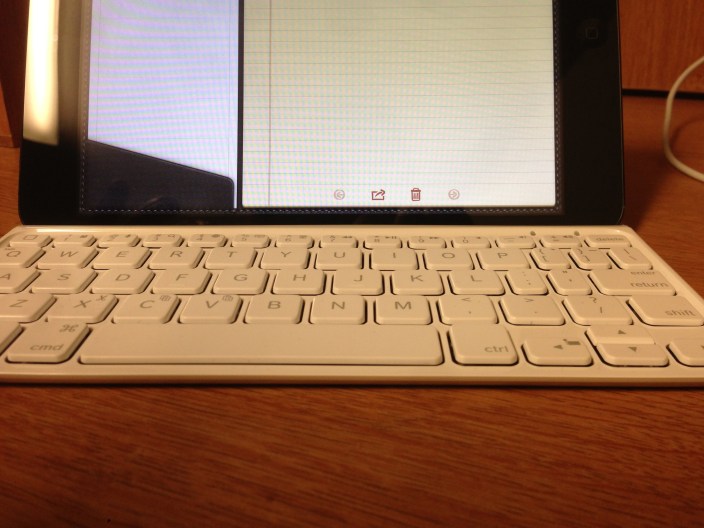 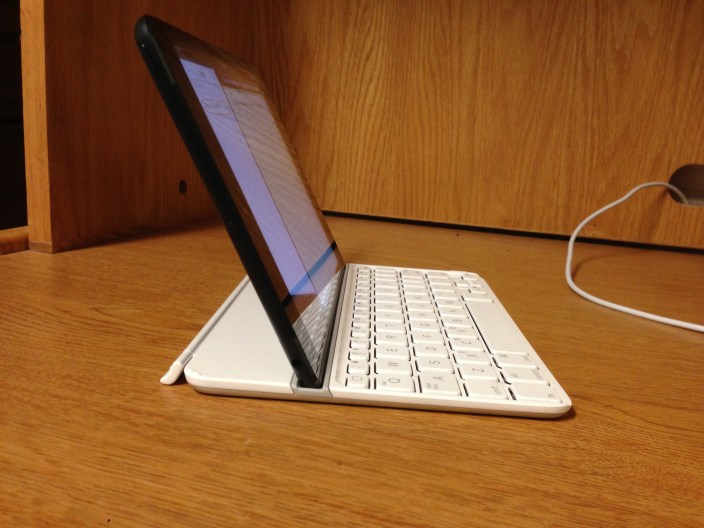 The physical design of the Keyboard accessory is simple, and it only features what is necessary for the user experience. Other than the keyboard, the only features on its front surface are indicator lights (one for Bluetooth status, the other for charging status), and the slit that will hold your iPad mini’s display in ideal typing position.

Not only do the black and white/silver keyboard color options match the iPad mini in terms of aesthetic design, but the build quality of the keyboard approaches that of Apple’s iPad mini design acumen. Like the back of the iPad mini, the back plate of the Logitech Ultrathin Keyboard is made out of high-grade aluminum. It not only makes the accessory look great, but the silver model does not seem to pick up many scratches with normal use.

Just like the Apple Smart Cover, the keyboard accessory includes a hinge that attaches to the magnetic side of the iPad mini. The plastic enclosed magnets on the keyboard are connected securely to the base of the keyboard, so it seems unlikely that it can easily break off.

The face of the keyboard is made out of plastic, but it still feels high-quality tough and long-lasting. Soft material has been thoughtfully placed on the corners of the front of the keyboard. This is in order to protect your iPad mini’s glass display from scratches while the keyboard is used as a cover. 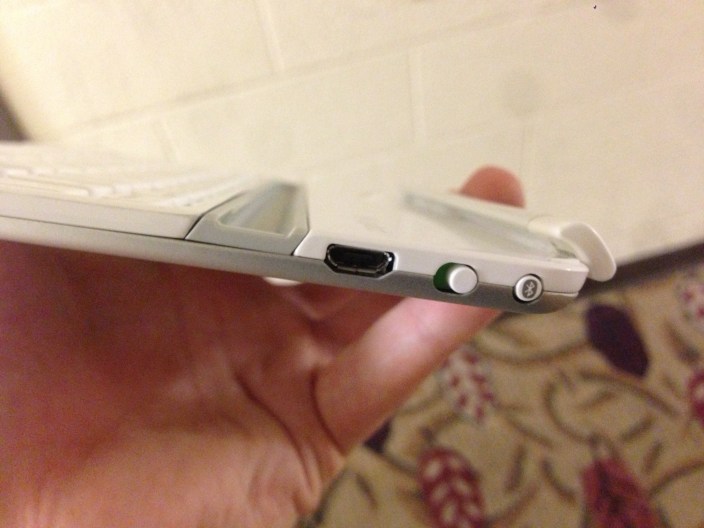 Pairing the iPad mini with the keyboard was very simple. To connect the two devices, the user simply needs to click the dedicated Bluetooth button on the right side of the keyboard. The Logitech device will then show up in iOS Setting’s easy-to-use Bluetooth menu. Compared to other Bluetooth iOS device accessories that I have used in the past, setting up this accessory out of the box was super quick and simple. 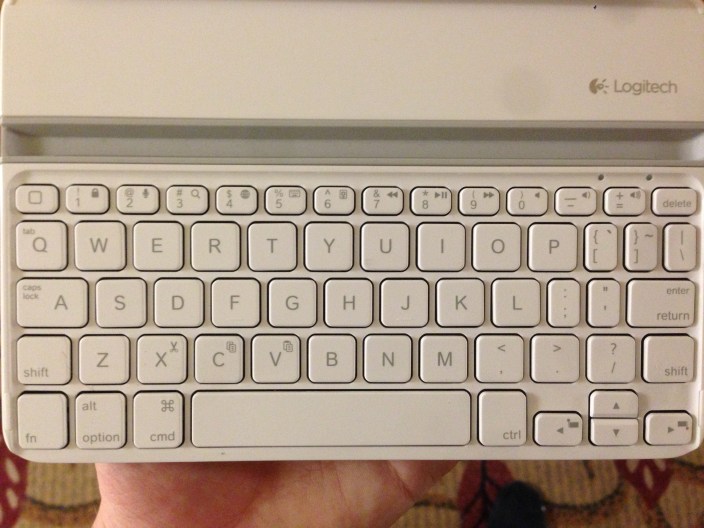 Besides the standard QWERTY keys, the Ultrathin Keyboard includes a series of dedicated iPad function keys. The 0-9 digit keys are connected to the functions, so users simply need to click “fn” simultaneously with the digits to active corresponding special functions.

From left-to-right, the top of the keyboard includes a home button (double click for multitasking), lock button, Siri button, a keyboard language selection key, a key to open the touch keyboard, a button to open the iPad’s lock screen slideshow feature, and media playback controls.

The keyboard makes accessing sometimes slow-to-reach functions quicker than ever. This adds an entire new dimension to the iPad power-user experience.

One function key that we would like to see added is a Dictation button (in addition to Siri). Siri can perform a lot of functions, but in typing intensive apps, a quick way (right from the Logitech keyboard) to perform speech-to-text can come in handy.

Like on a computer’s keyboard, the Logitech keyboard allows for quick cut/copy/paste with the command + x/c/v keys. This is a great feature for users who want to do advanced and long-form typing on the iPad mini. Additionally, the left and right arrow keys can replace your fingers as dragging points for text selection. This is also very handy and easy to use with little practice. 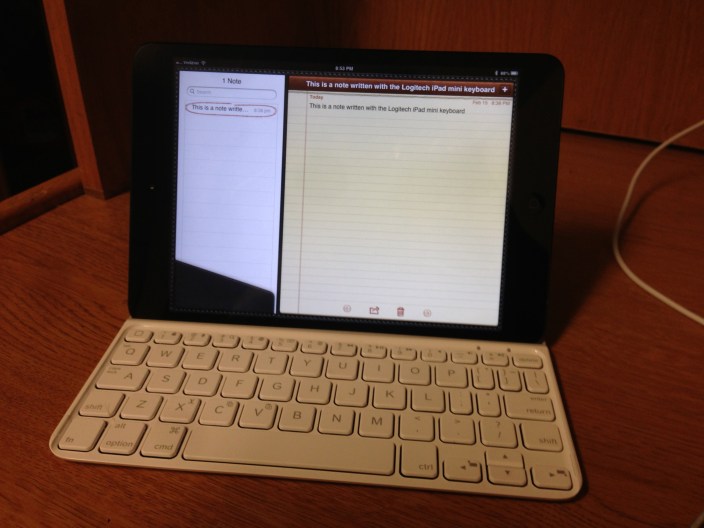 Because of the iPad mini’s overall footprint, Logitech had to make a few compromises in terms of where some keys are placed. For example, the Caps Lock key is combined with the letter “A.” This was a bit difficult for me to grasp in my testing of the keyboard’s performance initially, but after a short amount of time, I was typing without many issues. The iPad mini’s keyboard is truly not as cramped as one would imagine. 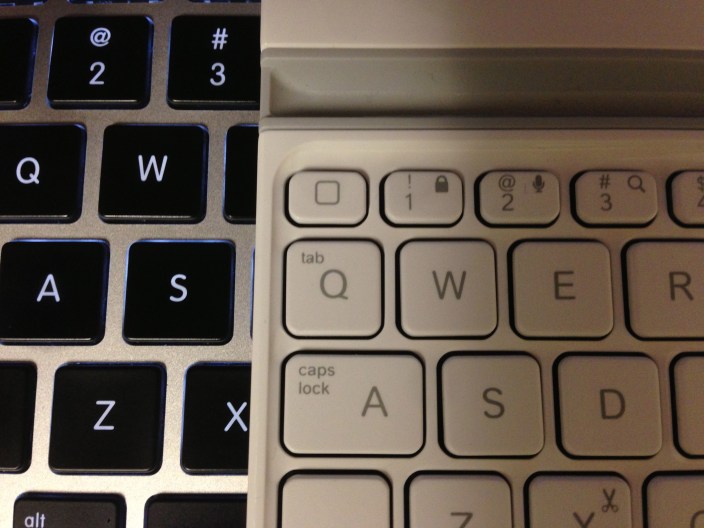 The keys for each letter are not much smaller than the letter keys on a MacBook’s keyboard. Because, however, the keyboard is narrower than a laptop’s keyboard on the sides, typing does definitely take some getting used to. I believe most users will be typing accurately on the Logitech keyboard, though, after some practice.

Either way, in my tests, it is definitely faster and easier to use than the iPad mini’s touch keyboard. The keys themselves are also very fluid to type with and provide just the right amount of typing feedback. Once you are used to it, it will truly be a pleasure and great experience to use. 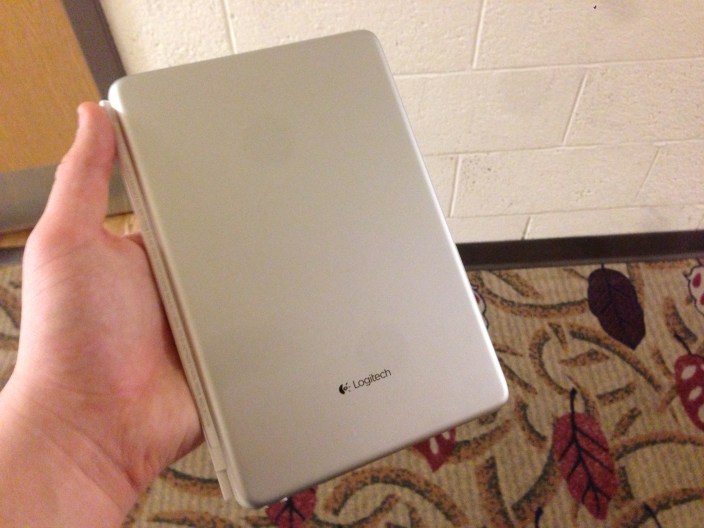 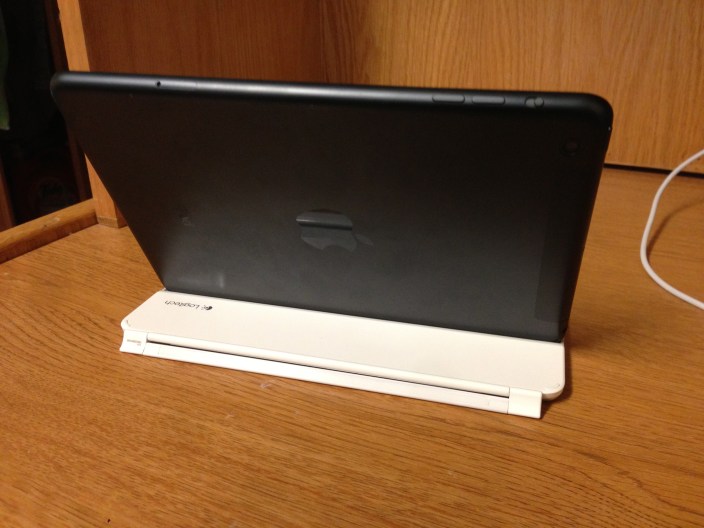 Logitech’s Ultrathin Keyboard for the iPad mini is an excellent, well-designed and built Bluetooth keyboard accessory. It is thin, light, and easy-to-setup. With a small learning curve for adjusting to the keyboard, this model is a great solution for anyone seeking to add mechanical keys to their iPad mini setup. The design, because it is Smart Cover-like in nature, will also resonate with many users. The keyboard comes in at $79, and we highly recommend it. My colleague Jordan also liked the Zaggs as well and we think you can’t go wrong with either.