Below, we’ve summarized a few interesting reads for today from around the web. 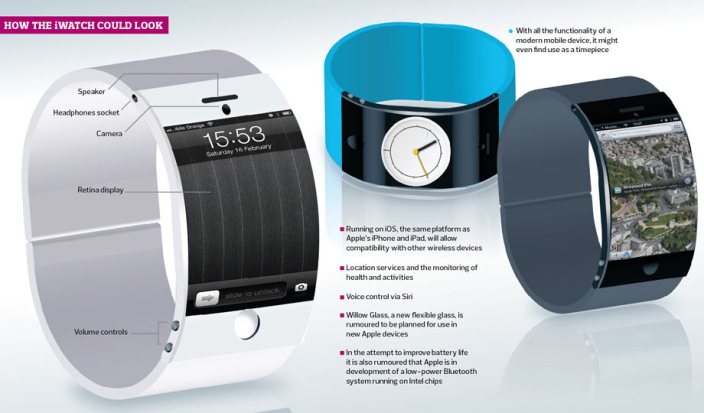 It’s hard to imagine that Apple would merely integrate an existing accessory into a new iPod. Sales of the iPod proper are decelerating, so the iPod-as-iWatch could give the line a much needed boost, but it’s difficult to reconcile the rumors of “100 people” working on the project if it’s just a retrofit job. Is Apple working on an iWatch that can be experienced as an Even More Personal personal computer — an “intimate computer”? If so, many questions arise: user interface, sensors, iOS version, new types of apps, connection with other iDevices… And, of course price. This would be much more interesting than the perennially in-the-future Apple TV set. Of course, iWatch and Apple TV aren’t necessarily mutually exclusive.

Apple is heavily rumored to be working on this wrist computer device. The company reportedly has a team of approximately 100 employees working on the project. (Mockup above via The Guardian)

Herrman summarizes the recent controversies and complaints over Apple’s recently released Podcasts application for the iPad, iPhone, and iPod touch. The report presents evidence of dislike to the application even from the App Store’s own reviews. Herrman puts the backlash in context with Apple’s pioneering of podcasts in the middle of the last decade. Herrman wonders that if Podcasting was so important to Apple, why hasn’t its app been fixed yet?

More worrying, perhaps, is the simple fact that Apple hasn’t done anything to fix an app that is so obviously in need of help. The company is not short on resources, but appears to have dedicated virtually none to the app that serves as the sole official way to download podcasts on iOS. “At least for my show, about 80% of the listening comes from Apple devices,” says Rubin. One wonders if Apple is treating its podcast app like it did its Remote app, which was reported to have been created by a team of one.

ABC7 Denver’s Don Champion on a smash and grab at Boulder Apple Store:

In yet another Apple Store burglary, ABC 7 Denver reports that the Boulder, CO Apple Store was hit for $64,000 worth of merchandise:

Boulder Police said a hooded bandit threw three rocks through the nearly $100,000 custom-made front glass door to break into the store early Saturday morning. Once inside, the man stole almost $64,000 worth of merchandise. Investigators said laptops, iPads and iPhones were among the display items stolen. An Apple expert said the merchandise is more than likely headed for the black market to be sold.

$100,000 for a glass door sounds outrageous…and is probably a lot more than reality.

Even though Apple is worth the most, Ferrari is claimed to be the most “powerful” company:

While Apple is constantly releasing new, successful products that have made it the wealthiest company in the world, a new report claims Ferrari is the most “powerful” global brand:

A case in point is Ferrari, owned by Italian car giant Fiat, that achieved the highest brand rating in the Global 500 despite being a niche sports car manufacturer with a much smaller enterprise value than many of the other global brands in the Top 500.