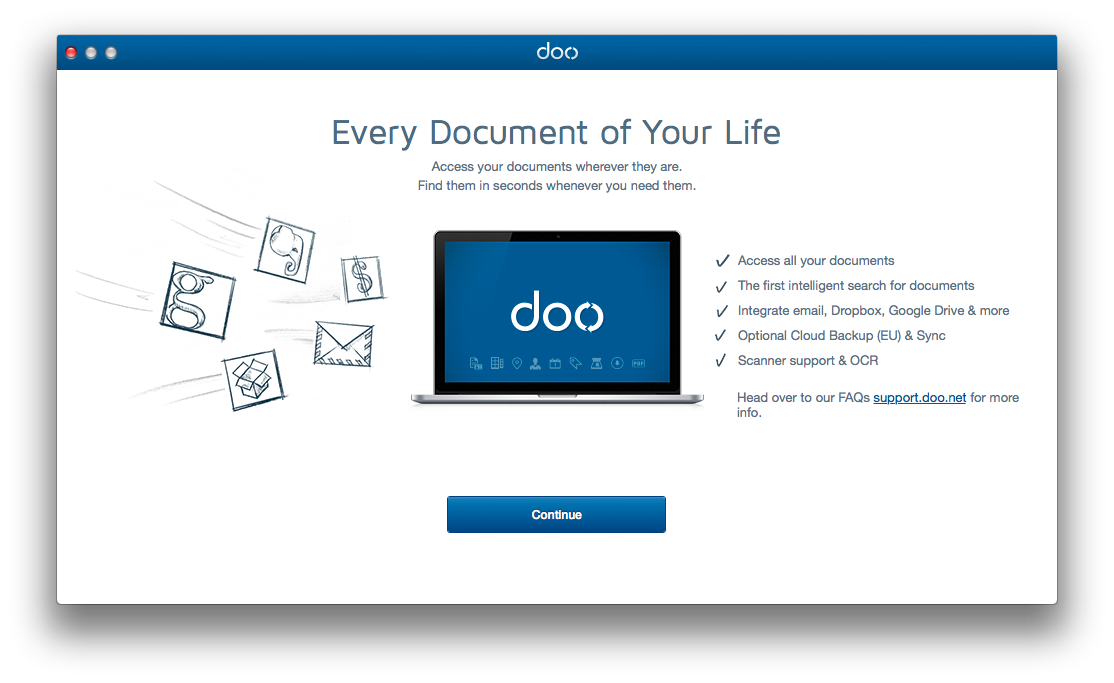 There are a lot of places you can store your files these days. There’s the Documents folder on your Mac, of course, but there’s also Google Drive, Dropbox, Microsoft’s Skydrive and more. And, of course, everyone has their favorite storage service. Some people prefer one over the other, and it’s up to you to make sure you can keep them all straight.

Well, now you don’t have to. Doo is a brand new Mac app that aims to bring all of these services under one roof, and it does not disappoint. Keep reading to see how Doo can help you finally make sense of your cloud storage, and get a 9to5Mac-exclusive first look at the upcoming iPhone companion app.

One of my biggest annoyances is when I’m out of the house without my laptop and suddenly need a file that’s on my computer. When I made that file, I had no idea that I was ever going to need it outside of the house, so I just saved it locally on my hard drive. This happened to me just the other day. When I realized the file was at home, I wished I had a way to access my Documents folder from my phone.

With Doo, that’s entirely possible. Doo monitors your Documents folder (along with any other folders you want to sync) and keeps them in the cloud for you. All you have to do is keep saving files exactly the way you did before. Doo keeps copies of a massive range of filetypes organized for you, based on file names and contents (which it can intelligently detect).

You can then combine the files from these folders with your automatically-detected email attachments, Dropbox, Skydrive, and Google Drive files. You can also create groups and folders, search your filenames and contents, or create Gmail-style rules to apply various modifications to the files.

Of course, when dealing with the cloud, there’s always a matter of security issues that might arise. In this case, some of your files (especially those which are regularly stored on your hard drive) will be uploaded to the Doo servers and kept there. If you have sensitive files that you aren’t comfortable hosting on a third-party app’s servers, you’ll want to be careful to exclude them from your syncing setup. As you’ll see later, it’s not hard to specify certain folders or filetypes for Doo to ignore.

It’s OK to be picky

The integration with cloud-based services runs a bit deeper in Doo than in similar software. While other applications will simply import your entire collection of files, Doo lets you choose which specific cloud folders you want to use.

For example, if you have three folders inside your Dropbox, but only want to sync one of them, you can do that. If you’re only interested in syncing spreadsheets from Google Drive, but want to leave other files alone, you can do that as well.

If I tried to list all of the features I had discovered within the first hour of getting this app, I’d probably be unable to remember them all. Doo is full of little touches and features everywhere. The more I clicked around, the more I realized I was only beginning to scratch the surface of what Doo could do.

The built-in search lets you find files based on almost any criteria. The file browser itself has a whole host of view and sorting options, from the familiar grid to a list-style like that of the Finder.

The app can track down duplicate files and will ask which one you’d like to keep in your library. This doesn’t delete anything from your cloud services. In fact, nothing you do in Doo will have an destructive effects on your cloud storage. While that may seem like a strange idea at first, when you consider how each service will handle the changes you make, it’s definitely for the best.

Doo also lets you scan across a timeline to find files that were created on a specific date.

Of course, there are a few cloud-sync services that aren’t covered by Doo: Evernote and Box.net. However, support for both of those networks is planned for an upcoming update to Doo.

Of course, if you’re going to sync your files to the cloud, it seems like you should be able to bring them with you wherever you go. To that end, Doo is building a family of apps for iOS, Android, and Windows Phone. The Doo development team was kind enough to provide us with a few exclusive screenshots from the upcoming iPhone version. It is scheduled to be completed in the first quarter of 2013. The iPad version is on track to be released after that. 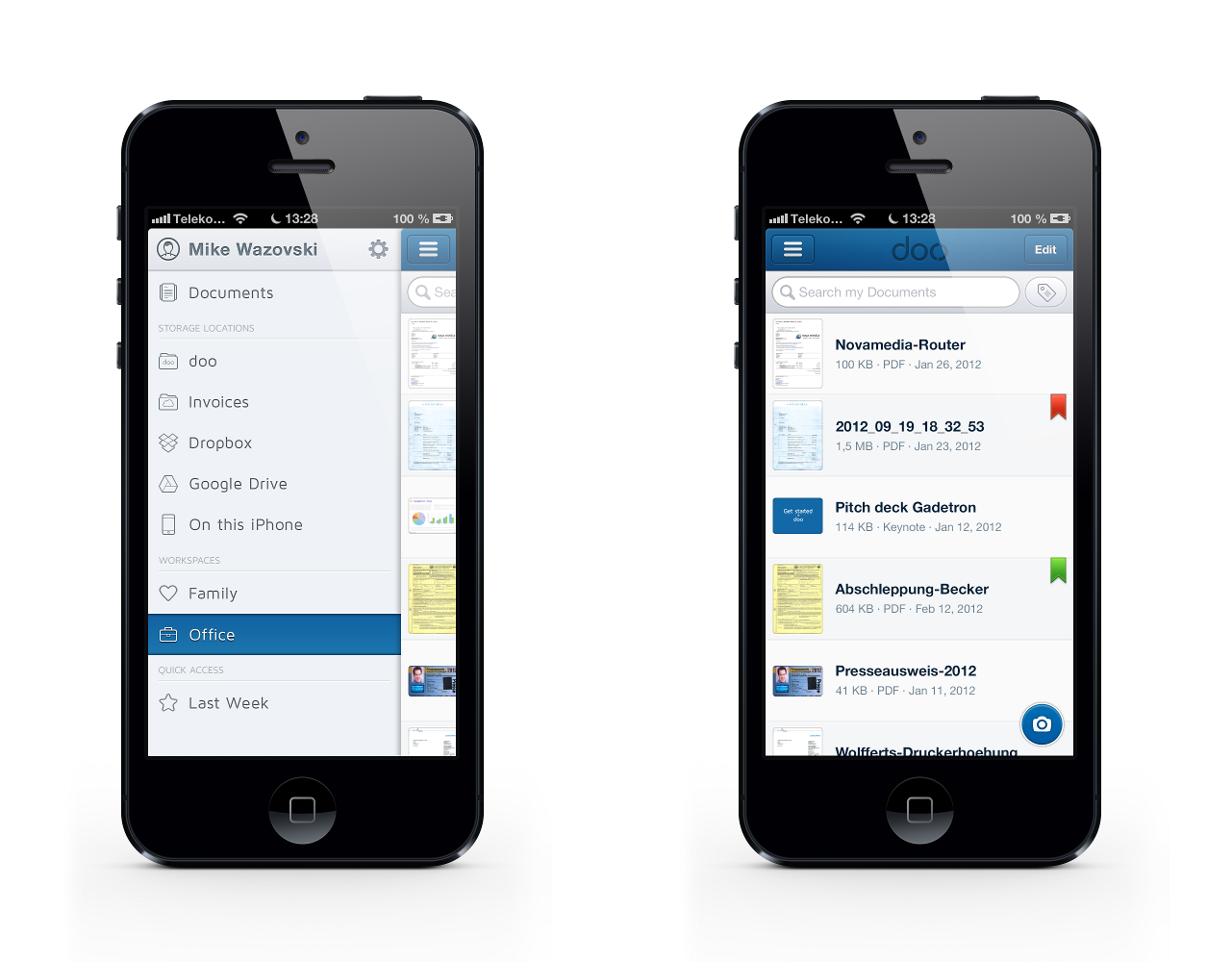 Doo is a fantastic app for keeping track of your cloud-stored items as well as for keeping your locally-stored files available on other systems. If you’re having a hard time managing your cloud services, Doo is for you.

With powerful tagging, search, automatic intelligent sorting, cross-service compatibility, and a whole lot more, Doo is one of the most complete cloud management apps to date.

Although the strength of the service is somewhat weakened by the immediate lack of a mobile client, knowing that one will be released soon does help ease that problem a bit. Perhaps a larger issue for many users will be the fact that Doo stores your files on their own server. While Doo does offer client-side encryption for the two highest-tier plans, users may want to be wary of any sensitive data stored in the cloud. Naturally, this same advice goes for all cloud services, such as Dropbox and Google Drive, even if you don’t connect Doo to those accounts.

Doo is free to download from the Mac App Store or the Doo website. In order to use the service, you’ll need a plan, but don’t worry: the free plan should be sufficient for most users. It lets you upload 2,000 documents or 1 GB of data (whichever comes first). Other plans are available for a fee as outlined on the Doo pricing page.

Doo requires OS X Mountain Lion (10.8 or higher). There’s also a “Metro” Windows 8 version if you need to work with a PC or Boot Camp. Windows 7 and mobile versions will be available soon.