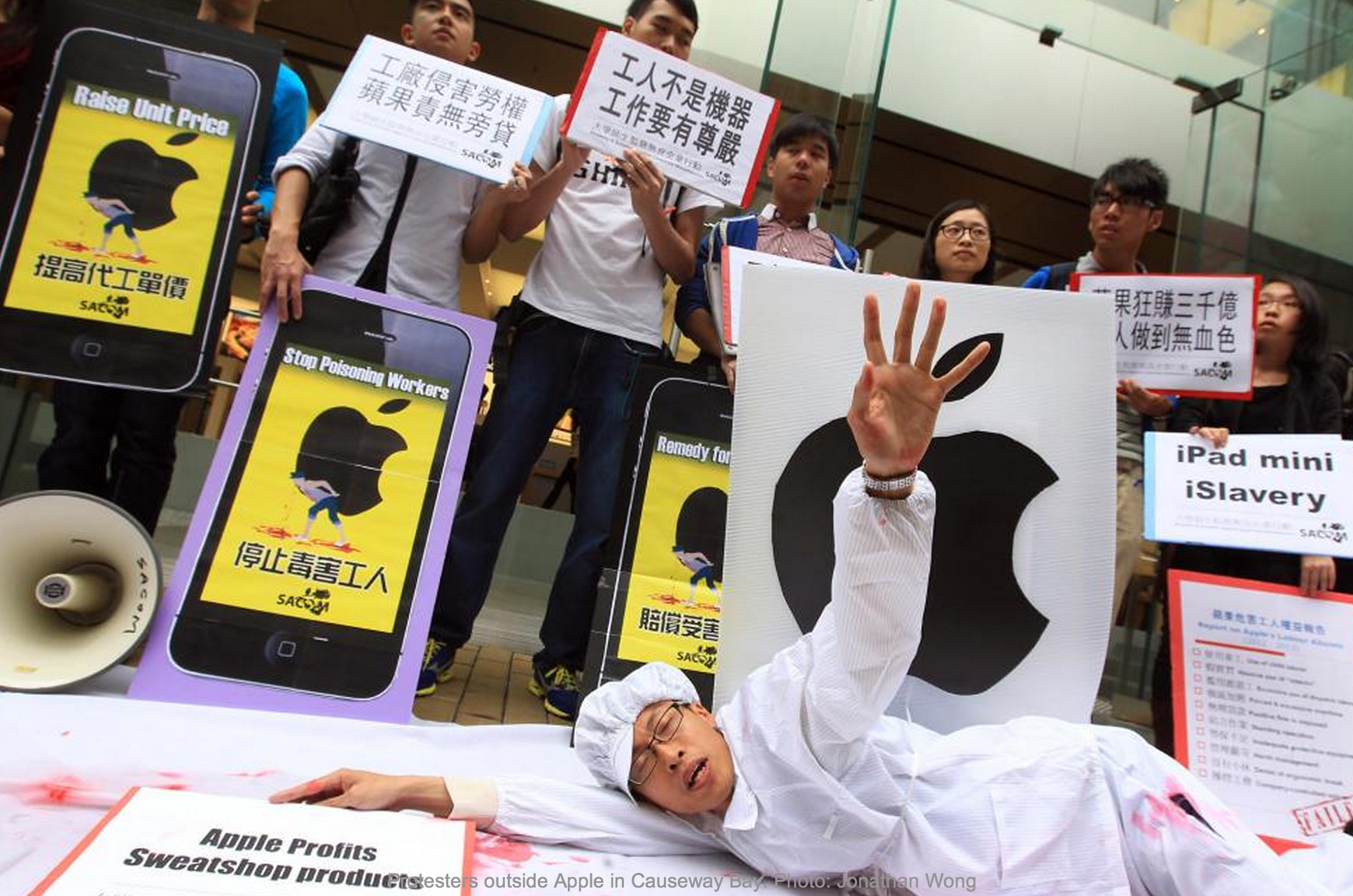 Hong Kong-based labor watchdog Student & Scholars Against Corporate Misbehaviour released a report on Tuesday that criticizes Apple for failing to properly monitor the labor practices of its suppliers. Despite performing a 72-percent increase over the number of audits it performed in 2011 following FLA audits, SACOM’s report claimed interviews with 130 workers from three Apple suppliers showed the company is failing to meet basic humane labor practices.

SACOM’s report outlined a number of violations reported by workers from three factories owned by Apple suppliers Foxlink, Pegatron, and Wintek. The three factories, located across China in Guangdong Province, Shanghai, and Jiangsu Province, are locations that Apple uses to produce and assemble various components of iPads, iPhones, and Macs. Among the complaints were allegations of unpaid work, excessive overtime hours, unachievable quotas, a rise in student interns, and other inhumane work conditions. SACOM also said workers reported accounts of potentially harmful chemicals, lack of  “basic human needs” like bathroom breaks, and verbal abuse and intimidation from staff members:

…to make sure workers meet the daily production targets, Apple suppliers resort to inhumane labor practices, even to the extent of denying workers’ basic human needs, such as allowing bathroom breaks, sufficient rest, and access to proper nutrition; these conditions partly contribute to the high labor turnover rate. Increasingly, Apple suppliers use student workers from vocational schools from all over China, under the guise of “student internships”… There is a rise in using student interns. Apple suppliers collaborate with vocational training institutions which require students to join a supplementary workforce for the factories, depriving students’ right to a quality education.

The South China Morning Post reported that SACOM, alongside the Confederation of Trade Unions, protested outside the Causeway Bay Apple store yesterday to bring attention to the new report. An Apple spokesperson provided a comment to the publication and denied the claims made in SACOM’s study:

“We insist that our suppliers provide safe working conditions, treat workers with dignity and respect, and use environmentally responsible manufacturing processes wherever Apple products are made.”She also said that the suppliers must live up to these requirements if they want to keep doing business with Apple.

Apple released its annual Supplier Responsibility Report earlier this year to report 393 audits performed during 2012, and the company promised to sever ties with suppliers and hiring agencies that purposely hire underage workers. Apple also said its worker empowerment program providing education on local laws and supplier code of conduct was extended to 1.3 million employees during 2012. That’s double the amount of workers trained in the program since 2008.

A breakdown of the claims presented in SACOM’s report is below, and you can check out the full report for yourself here.

1. At all the factories investigated, the majority of workers- nearly 80% – are precariousworkers who are more vulnerable to labor rights violations.

2. There is a rise in using student interns. Apple suppliers collaborate with vocational training institutions which require students to join a supplementary workforce for the factories, depriving students’ right to a quality education.

3. Excessive long working hours are observed in the suppliers’ factories, especially during peak production seasons. Overtime work might take up to 4 hours a day, yielding work days as much as 14 hours and workers could only have 1-2 days off for the entire 3-month period. This means during this period work weeks of 70-100 were common, far in excess of that required by Chinese law (about 49 hours) or the standard set by Apple (typically 60 hours per week).

4. From our investigations, there are many instances of unpaid work, imposed through mechanisms such as cutting meal times, requiring workers to arrive to the factory before their official work hour for work meetings, making workers wait in long lines to swipe the time cards, and requiring workers to wear burdensome dust-free uniforms that are time consuming to put on and take off. The most severe complaint of the workers was in regard to unpaid overtime, as they are forced to stay in the factory’s unit until they have met the high production quotas assigned.

5. The long working hours, unachievable production quotas, and alleged unpaid overtime work has driven workers from Apple suppliers and accelerated the turnover rate, which in turn, has compelled Apple suppliers to depend heavily on labor agencies to recruit an increasing number of dispatch workers (in one case, a labor agency recruited up to 1000 workers a day). In addition, dispatch labor is deprived of the benefits that regular, full-time workers are entitled to. Overall, labor conditions are deteriorating, both for regular workers and dispatch workers.

6. Apple suppliers employ chemicals in the production process that are potentially harmful to workers. The research found that workers are not informed of the potential harms, and there is inadequate protective equipment. Excessive noise, dust, and potent chemicals put workers’ lives at risk. Our investigations show that the supplier Pegatron factory in Shanghai, one year after the explosion in December 2011, the case polishing unit has not improved the ventilation and the working environment remains very dusty.

7. There is an intensification of military- style management in Apple suppliers. They employ measures that deter workers from using toilets and cut meal times to coerce workers to meet high production quotas. Workers also suffer verbal abuse from frontline supervisors and are humiliated in front of other workers. Moreover, to discipline workers, there is a wide range of arbitrary punitive fines imposed on them. Workers are intimidated and told to keep silent, with threats that their wages will be cut. These various punitive measures have led to increasing antagonism toward shop floor supervisors. We found scarce evidence of management’s attempts to improve this situation; on the contrary, the influx of new workers and rapid turnover of the work force have exacerbated management-worker relations.