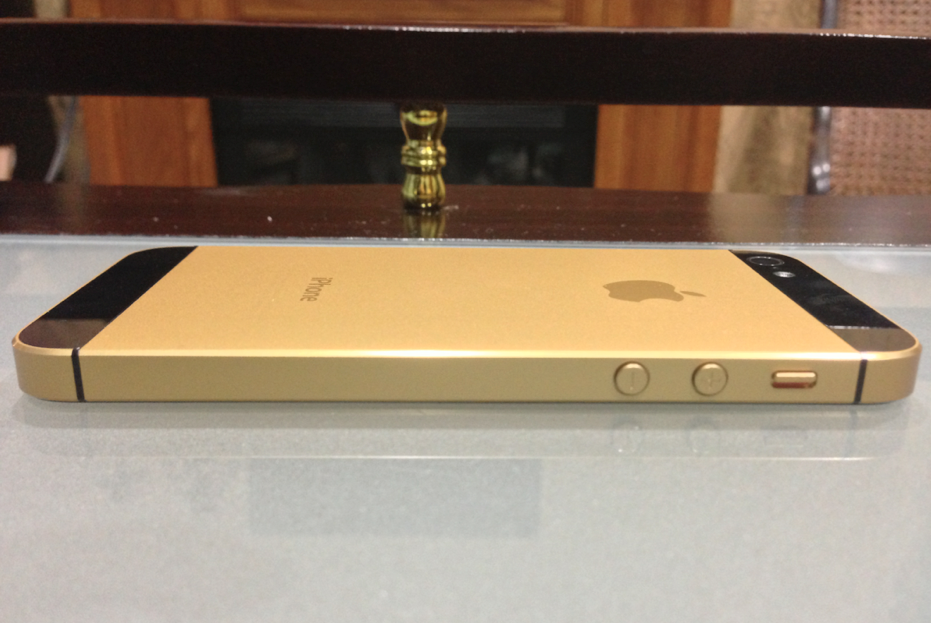 A company called AnoStyle offers a unique method of anodization that permanently alters the color of an iPhone 5 or iPad mini, and it just became available internationally last week, so I decided to give it a whirl and turn my black iPhone into gold.

There isn’t much to report besides everything turned out great and I love the result. It feels and looks like my iPhone, only in gold. The only con to AnoStyle, at least for the gold color option, is that the text below “iPhone” on the back is now extremely faint. Other than that, I feel like I own a limited edition iPhone (dusts shoulder off), and at least four people have asked me how I managed to snag a gold iPhone.

There is clearly a huge, untapped interest in colorful iPhones. Numerous reports in recent months suggested Apple could soon introduce a new iPhone in colors other than black and white. The news isn’t really that surprising, as Apple already offers a line of aluminum iPod touches in multiple colors. From my experience in the last 24 hours, varied color options would certainly be a standout and attractive feature (especially if the company were to launch an “S” iPhone instead of a full refresh this year).

In the meantime, however, there is AnoStyle: it costs $249 for the iPhone 5 and $299 for the iPad mini. The steep price is a bit of a hurdle for some, but it’s still perfectly worth the money and a great way to customize an iOS device.

AnoStyle offers 14 color options—red, pink, yellow, orange, blue, teal, green, violet, gold, copper, bronze, blue steel, rose gold, and flat black—for both the iPhone 5 and iPad mini, and it doesn’t just paint, cover, or replace parts of the device. It actually uses a chemical process, otherwise known as anodization, to transform the non-glass aspects of the iPhone into a new hue and then lock the color in place.

AnoStyle does the custom—and irreversible— process by hand, but it can also alter the color of a device more than once and even conducts a “21-point test” after the transformation to ensure the finished product is flawless.

Unfortunately, any modification to an iOS device typically voids warranties. AnoStyle offers repair options through The Pod Drop, though, as do a number of other companies. Also, for those worried about negatively affecting their resale or trade values, Gazelle, a popular marketplace for recycling old tech, told 9to5Mac that it will not deduct from iPhone 5 and iPad mini values as long as the devices have original parts.

“If you’re trading in on Gazelle, there’s no downside to personalization,” said Gazelle Chief Gadget Officer Anthony Scarsella in regards to both AnoStyle and modifications like engraving. “We will pay the customer the quoted amount, without deduction.”

Before sending any device to AnoStyle, make sure to remove the SIM card, if applicable, and back it up. AnoStyle recommends resetting the device and erasing all content, as well, because folks must disable their passcodes for the 21-point test. The entire process, from shipping to receiving, can take up to two weeks, but devices ship back via the same shipping method chosen during the original online transaction.

AnoStyle is available in over 50 countries. Visit the Order Now page and enter the checkout process to see a complete list of available countries.  For those willing to try it, AnoStyle is offering $50 off to 9to5Mac readers. Just enter “9TO5MACANOSTYLE” upon checkout. The code expires March 31, but it works toward any AnoStyle service for iPhone 5 or iPad mini.

Oh, and here’s an image of Chumlee from the popular reality show “Pawn Stars” with a gold (possibly AnoStyled) iPhone: