1. The Croods Rovio, the brains behind the Angry Bird franchise, Bad Piggies, and Amazing Alex, announced on Friday that it teamed with DreamWorks to launch a new game for Android and iOS. The game, called “The Croods”, goes along with DreamWorks’ upcoming 3D and CG animated feature film of the same name, and it will hit the App Store for free on March 14. Get more details at 9to5Google or watch the video above.

1. KitCam | $1.99 Version 1.5.2 of this photo app includes a fix for Iris sometimes not opening when the app launches, as well as improved startup speed and various bug fixes.

More apps and updates are below.

3. Draw Mania | $1.99 Version 2.460 of this draw-and-guess app got rid of the Valentine’s Day theme, and it added Instagram export support, optimizations, and bug fixes.

4. Eventbrite | Free Version 2.4 of this discovery app brings a new Discover view, the ability to connect with Facebook and invite friends, and event recommendations. Additional tweaks include:

6. Tweetlogix | $1.99 Version 2.0 of this Twitter client launched with universal support for iPad and iPhone. The update also added bug fixes, new features, and improvements, such as:

7. Tweetbot for Mac | $19.99 Version 1.2.1 of this desktop Twitter client added “Your Tweets, Retweeted” to the Retweets tab. It also warned users that the “Retweets by You” and “Retweets by Others” API calls were removed by Twitter in its API 1.1 update, so some people might need to choose “View -> Displayed Tabs -> Retweets” from the menu to get the Retweets tab back. The update also included various bug fixes. 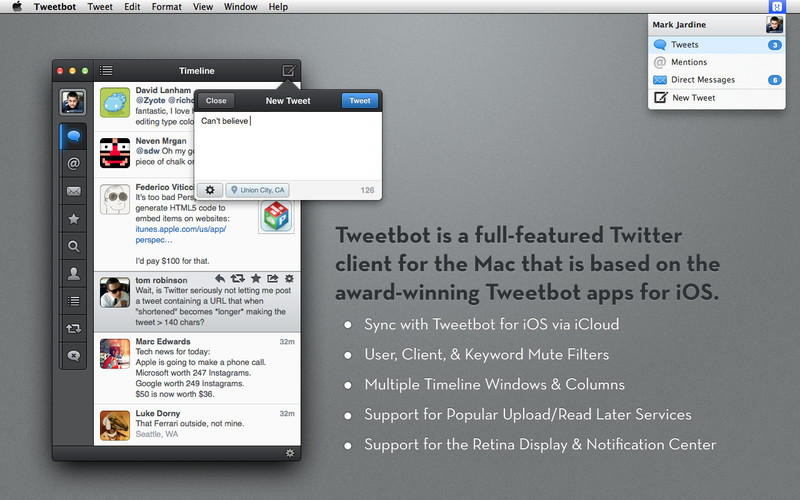 In honor of this year’s “Hats Off to Reading” theme, the award-winning The Cat in the Hat digital book app is 99 cents (regular price $3.99) and The Cat in the Hat camera app is available as a free download (regular price $1.99). In addition, more than 40 Dr. Seuss apps are on sale ranging in price from 99 cents to $8.99 including classic books, short stories, book collections, cameras and games. The sale runs from March 1 through March 7 on the App Store℠, Google Play™, Amazon Appstore, Barnes and Noble NOOK Store™ and Windows Store.