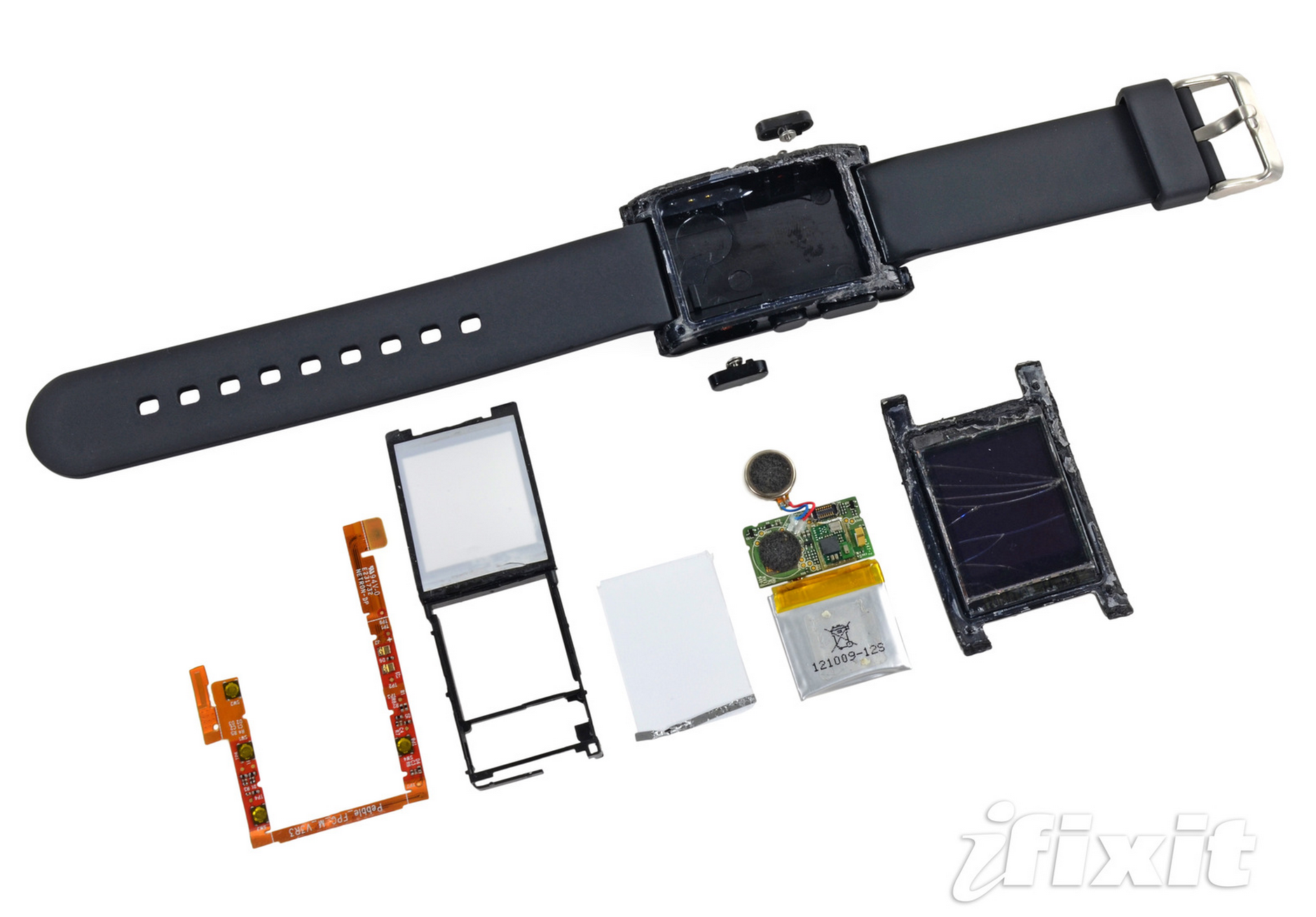 Update: We’ve received information directly from Pebble that the watch does indeed support Bluetooth 4.0. The company provided the following explanation regarding iFixit’s findings:

The Bluetooth chips TI sent to Panasonic were labeled CC2560 but have been flashed with the firmware (and BT LE support) of a CC2564. That’s why the module was labeled PAN1316. Many chip vendors make silicon consistent between product lines but simply flash different firmware to enable features. Our chips were labeled CC2560 because TI asked us if we wouldn’t mind using them with CC2564 firmware to speed up our order. Pebble most definitely has Bluetooth LE support, though it has not yet been enabled in our operating system.

iFixit has performed its usual teardown process for yet another device today, this time giving us a look inside the recently launched Pebble Bluetooth smart watch. iFixit admits it has no way of rating the repairability of this type of device, and for that reason isn’t giving it a repairability score like usual. Unfortunately, at first glance the watch doesn’t appear to be easily repairable with the report noting waterproofing makes for a “very inaccessible battery.” iFixit noted that excessive adhesive used to keep out water made it impossible to access the insides of the device “without compromising the display”:

The Pebble employs tons of adhesive to keep water (and tinkerers) out. Add in a bezel around the screen, and it’s impossible to separate the cases without compromising the display.

The report also claimed that the Bluetooth chip being used does not appear to support Bluetooth 4.0 (BLE), despite the company promising support for the protocol in a future software update:

The backside of the motherboard houses a Panasonic RF module, promising both Bluetooth and Bluetooth Low Energy (BLE) functionality, as advertised by the folks at Pebble. Removing the EMI shield reveals a Texas Instruments chip in the same family as, but slightly different than the one we expected. According to its datasheet, this chip doesn’t support BLE. Word on the street was that Pebble had BLE functionality just waiting to be activated with a firmware update, but we can’t find evidence of the hardware to back up this hidden potential.

The good news is iFixit estimates the battery in Pebble will last 6 to 10 years and the developers confirmed a recycling program will be in place. We’ll have to wait for official word from Pebble on the questioned Bluetooth 4.0 support. You can check out the full teardown from iFixit here.