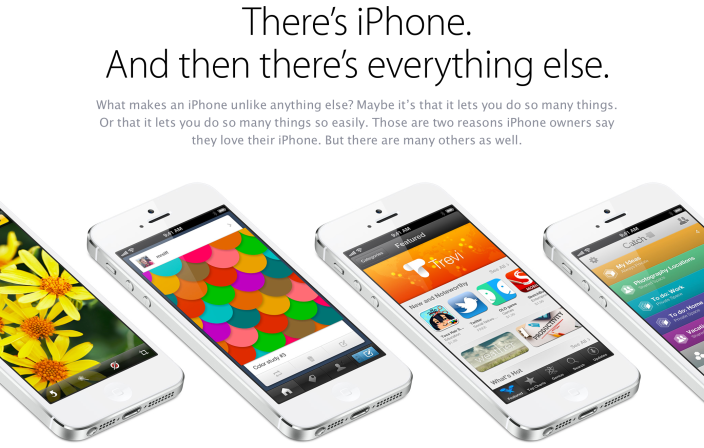 On the eve of Samsung’s Galaxy S4 launch, Apple and its marketing chief Phil Schiller spoke with mainstream news publications to slam Android and iPhone competitors. Now, following the launch of the new Samsung device, Apple has opened up an entire new web page to tout why people have loved the iPhone for so many years and to seemingly throw some negative claims against Android and Samsung devices.

Apple has also begun emailing a version of this webpage to its own customers, something that makes this seem more defensive than offensive.

Apple leads its new page by explaining that people love the iPhone because of its ease of use and various capabilities. Apple then touts its high customer satisfaction with the iPhone via its numerous J.D. Power and Associates awards:

Apparently love can be measured. In eight straight studies by J.D. Power and Associates — that’s every study since the first iPhone was introduced — iPhone has been ranked “Highest in Customer Satisfaction with Consumer Smartphones.” iPhone ranked highest in the study, which reviewed the following categories: performance, physical design, features, and ease of operation.

Now that Apple has won a 9th JD Power award, the company sent the following email to customers: 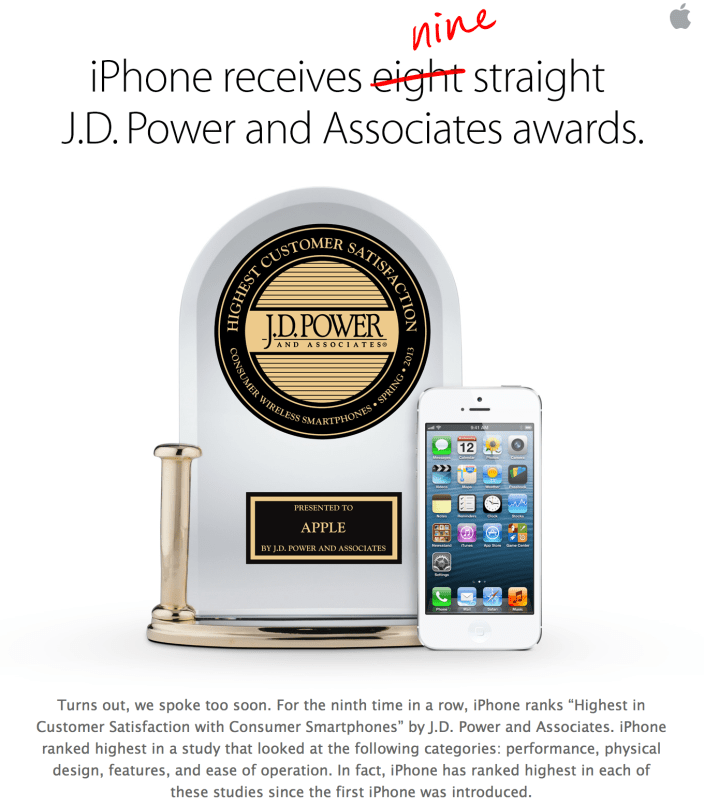 Recycling its previously used “iPhone feels like a finely crafted watch” phrase, Apple again demonstrates how much work went into the iPhone 5’s design. Apple appears particularly proud of the aluminum enclosure. The iPhone 5’s aluminum design process can be seen as very different compared to the plastic body of the new Samsung device.

Apple also explains the resolution and quality of the Retina display found on the iPhone and other Apple devices:

The Retina display on iPhone ushered in the era of super-high-resolution displays. Its pixel density is so high, your eye can’t distinguish individual pixels. The images and words are amazingly vivid and crisp. Everything just looks so real. In fact, once you see a Retina display, you’re never satisfied with anything less. Yet it remains a feature found only on iPhone and other Apple products.

This section is reminiscent of Phil Schiller’s comments about the iPhone before the Samsung phone launch. The iPhone’s screen is “still the best display of any smartphone,” Schiller said. Schiller also commented about the battery life of the iPhone, saying, “given the iPhone 5 is so thin and light, the reason that people are making their devices bigger is to get up to the battery life the iPhone 5 offers.” Similarly, this new web page touts the iPhone 5’s battery performance while slamming the larger batteries found in other devices:

It’s impressive that iPhone 5 gives you long battery life so you can easily make it through your day. You get up to 8 hours of talk time, up to 8 hours of browsing over cellular networks, and up to 10 hours of video playback.2 But it’s extraordinary that we fit such a powerful battery into such a thin and light design — all thanks to Apple scientists who created unique battery chemistry instead of settling for a large, off-the-shelf option.

Apple notes that its custom iPhone 5 A6 processor and LTE chipset works hand-in-hand with the software to maintain battery performance.

Notably, Apple’s new webpage also slams phones that tout large numbers of megapixels. Instead, Apple notes how popular the iPhone is with Flickr:

The iSight camera on iPhone is the world’s most popular camera. It’s an amazing camera that’s always in your pocket. And while other smartphones simply tout large amounts of megapixels, taking great pictures is about so much more. The 8MP camera on iPhone 5 captures great photo data, and the hardware and software work together to make behind-the-scenes image and color adjustments. So it’s easy for anyone to take impressive photos in various lighting conditions.

Additionally, Apple touts Siri, iOS’s deep integration with iPhone hardware, iCloud content syncing, and AppleCare support. Apple’s seemingly most damning comments against Android, however, comes in terms of the App Store. Apple notes how widespread and trusted the iTunes Store is and also notes the 800,000 apps available on the App Store. The stores section also ends with a hit against malware (seemingly referring to Android – note Schiller’s tweet about this last week) (bolding emphasis ours): 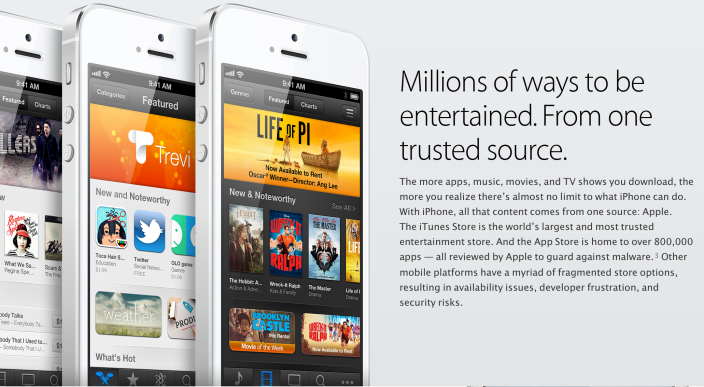 The more apps, music, movies, and TV shows you download, the more you realize there’s almost no limit to what iPhone can do. With iPhone, all that content comes from one source: Apple. The iTunes Store is the world’s largest and most trusted entertainment store. And the App Store is home to over 800,000 apps — all reviewed by Apple to guard against malware.3 Other mobile platforms have a myriad of fragmented store options, resulting in availability issues, developer frustration, and security risks.

Apple also links to this new page via its homepage. Apple’s email to customers (thanks Sam & Shabby!):