Review: Is the Ampjacket for iPhone anything to get amped about? 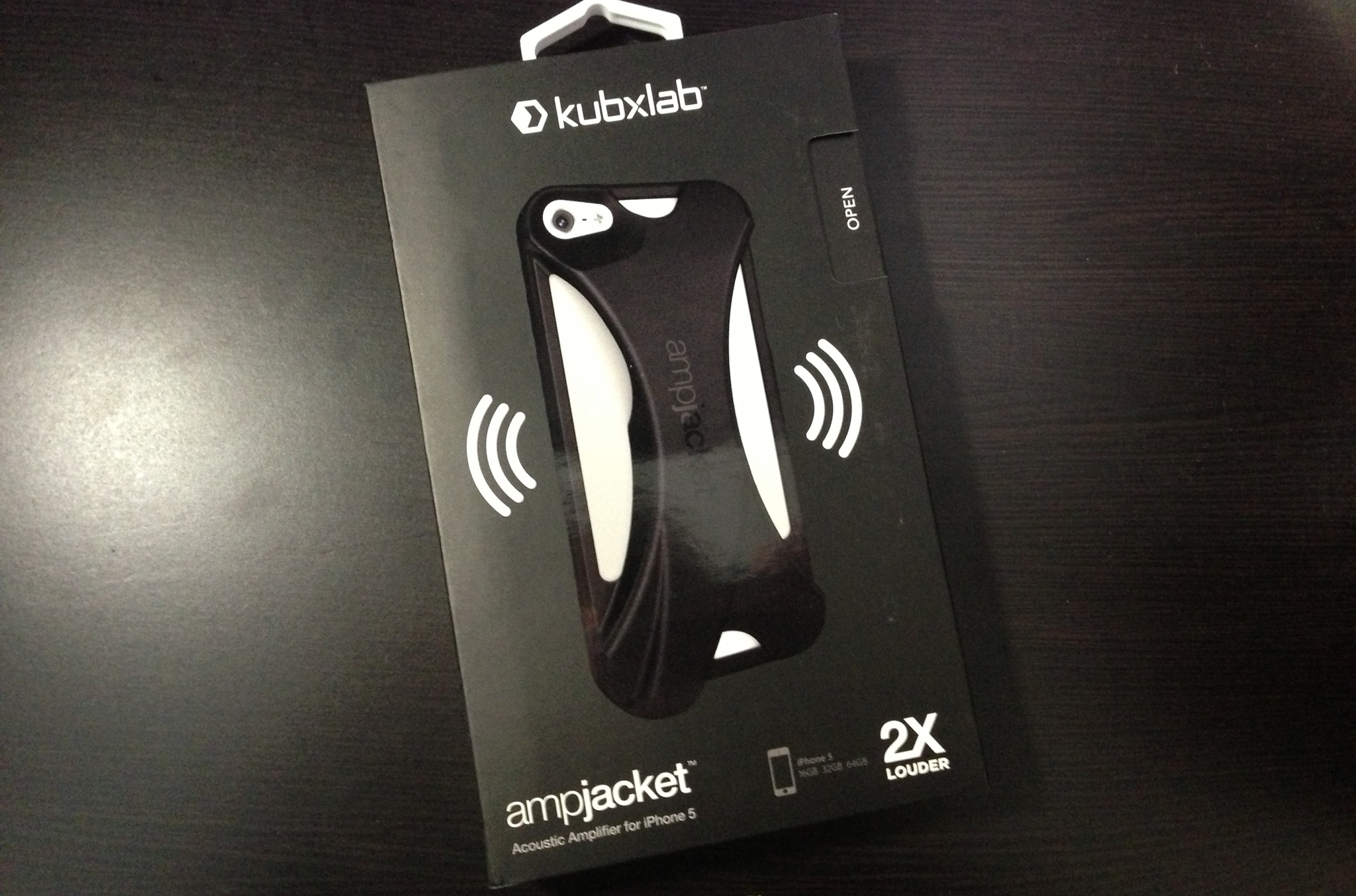 When I used to work an overnight shift at my old job, my coworkers and I had a habit of pulling out our phones and blasting music while we worked. I always thought it was a bit odd that my iPhone 5’s speaker was so much quieter than those of the low-end Android phones many of the other employees carried. It’s not something that happens often outside of that job, but sometimes I find that my phone is just too quiet.

There are a variety of cases on the market that purport to solves this problem without any additional speakers. Most of these just work by putting a small cupped piece of plastic behind the speaker to direct the sound toward the front of the phone. I’ve been summarily unimpressed with these cases.

When I saw the Ampjacket by Kubxlab, the distinct design caught my eye. Instead of a cupped piece of plastic, the Ampjacket redirects the audio from the iPhone’s to a two-way amplification chamber built into the back of the case. Could that be the key to finally getting improved volume out of the iPhone, or would it prove to be just another dud?

If you’re going to put something on your iPhone, you want it too look and feel good. The Ampjacket is thicker than most cases in order to accommodate the openings in the back. That’s not an entirely bad thing, though. 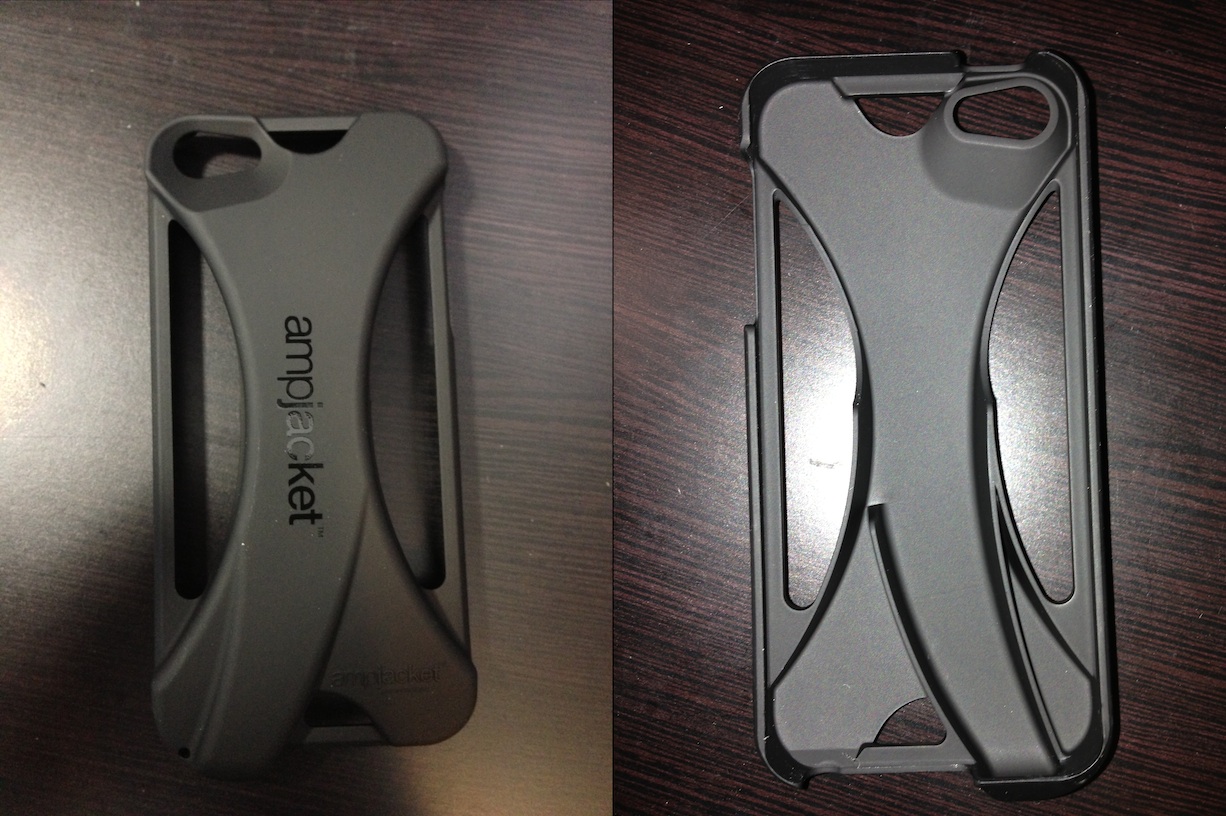 The rounded back makes the Ampjacket very comfortable to hold, and the sound cutouts on the back actually give you an additional point to grip the phone. I’ve been holding my with my fingers wrapped around the cutout rather than the body of the phone, and I’ve found that it’s actually more comfortable that way. And while a rounded surface may not seem like the best thing to set the phone on, the very back of the case (where you see the Ampjacket logo) is just flat enough to keep the phone from constantly wobbling back and forth.

The rounded back also has an unexpected perk: it is now nearly impossible to pull my phone out of my pocket facing the wrong direction. Without a case, the iPhone is flat on both sides, so I end up pulling it out and trying to unlock the aluminum back. With the Ampjacket, I’ve pulled it out the correct way every single time.

The case is very lightweight and doesn’t make the iPhone noticeably heavier. All buttons and ports are fully accessible although I did have some trouble getting to the sleep button at first. After a day of using the case, I got the hang of hitting the button from a different, easier angle.

One issue that I found with the Ampjacket’s design wasn’t in using it; the problem was in removing it. While taking the case off (which I did a few times) I felt as if I was going to break the case, my iPhone, or both. I had a hard time finding something to grip on the phone to pull it out, and the acoustic opening on the back of the case isn’t big enough to really allow you to push the phone out the front. Even if it was, the case hugs the phone so snugly that I feared I would break the acoustic chamber right off of the Ampjacket. After removing it a few times, I still didn’t feel incredibly comfortable taking it off, and I still can’t do it very easily. I am also concerned that removing the case often (to put the phone in a dock, for example) could increase the chances of damaging the phone.

It wouldn’t be much of a sound-amplifying case if it didn’t amplify sound well. The Ampjacket definitely provides a big boost in volume. In terms of overall increase in loudness, the Ampjacket blew me away. I cranked my phone up to full volume to see how loud it would go, and believe me, this thing will go as loud as you need it and then some.

Unfortunately, this volume boost comes at a cost. As is the norm for any sort of echo-based amplification, the quality of the audio suffers a bit. Specifically, the highs out-performed the mids, and the lows almost completely disappeared into the mix. This isn’t because of a design flaw or some other oversight. This is just how echoes work, and that’s how every single “speaker-free” amp case works.

You can see a video of the Ampjacket’s effect on music below and judge the difference for yourself.

However, music isn’t the only use case for the Ampjacket. In fact, as I said above, I’m not always walking around listening to music from my phone’s speaker. The only time I really did that was at my last job. But I do use my phone for a lot of other things, like text messages, Twitter, email, and a bunch of other things that send me a lot of notifications. This is one area I had totally overlooked before. When I get a text message, I sometimes don’t notice because I miss the vibration in my pocket, and the ambient sound wherever I am blocks out that oh-so-familiar tri-tone melody. When I put the Ampjacket on, I heard every single text that came in, even with my ringer at only half volume.

The same principle applies to phone calls on speaker. The lack of complexity in the sound (and generally bad quality of phone calls anyway) means the Ampjacket can boost the volume without much the quality taking much of a hit.

The Ampjacket is made of hard plastic in order to better facilitate the echoes needed to increase the volume. I didn’t go through a rigorous series of tests to see how durable it was. In fact, I only dropped it once, and that was on carpet. Judging from the feel of the case, however, I wouldn’t suggest tossing it around willy-nilly, but it does seem able to withstand at least one drop. I’m not sure if the plastic could survive more than that, and I wouldn’t be surprised if a single blow was all it took to crack it.

Kubxlab makes no claims about the durability of the case. Its primary function is to make your phone louder. While the iPhone 5 is more durable than its predecessors, having any case on the phone will offer you more protection than nothing at all. So while it would be nice to have some assurances about the Ampjacket’s ability to take a hit, simply having a plastic cover will afford your phone some additional protection.

In my opinion, Kubxlab has created a mixed bag with the Ampjacket. Many cases like this are simply no good because the amplification is underwhelming and the design is boring. The Ampjacket easily overcomes these drawbacks. The design is slick, fits great in my hand, and uses a clever amplifier to boost notifications, speaker phone calls, and FaceTime chats to unbelievable levels while maintaining the fidelity of the simple sounds.

That’s why the Ampjacket presents a conundrum. It excels in some areas, but the drawbacks are certain to be deal-breakers for some people. If, like me, you don’t plan to use it for music often, the Ampjacket is a perfect amplifying case—so long as you don’t need to remove it every day. If you’re just looking for a way to amplify your music and don’t care about phone calls or notifications, you can definitely still use the Ampjacket for that, but you will notice an impact on the sound quality. Of course, you’re going to run into that issue any time you try to maximize your volume without an external speaker, so it’s somewhat unfair to pin this fault on the Ampjacket alone.

The Ampjacket is a solid case that looks and feels great, but suffers from limitations imposed by the very nature of sound. That fact, combined with the difficulty of removing it from the phone, may make it a tough sell for some customers. That being said, I would recommend the Ampjacket to users looking to get more out of their iPhone’s built-in speaker, provided you intend to leave it on the phone at all times and don’t mind some loss of musical quality.