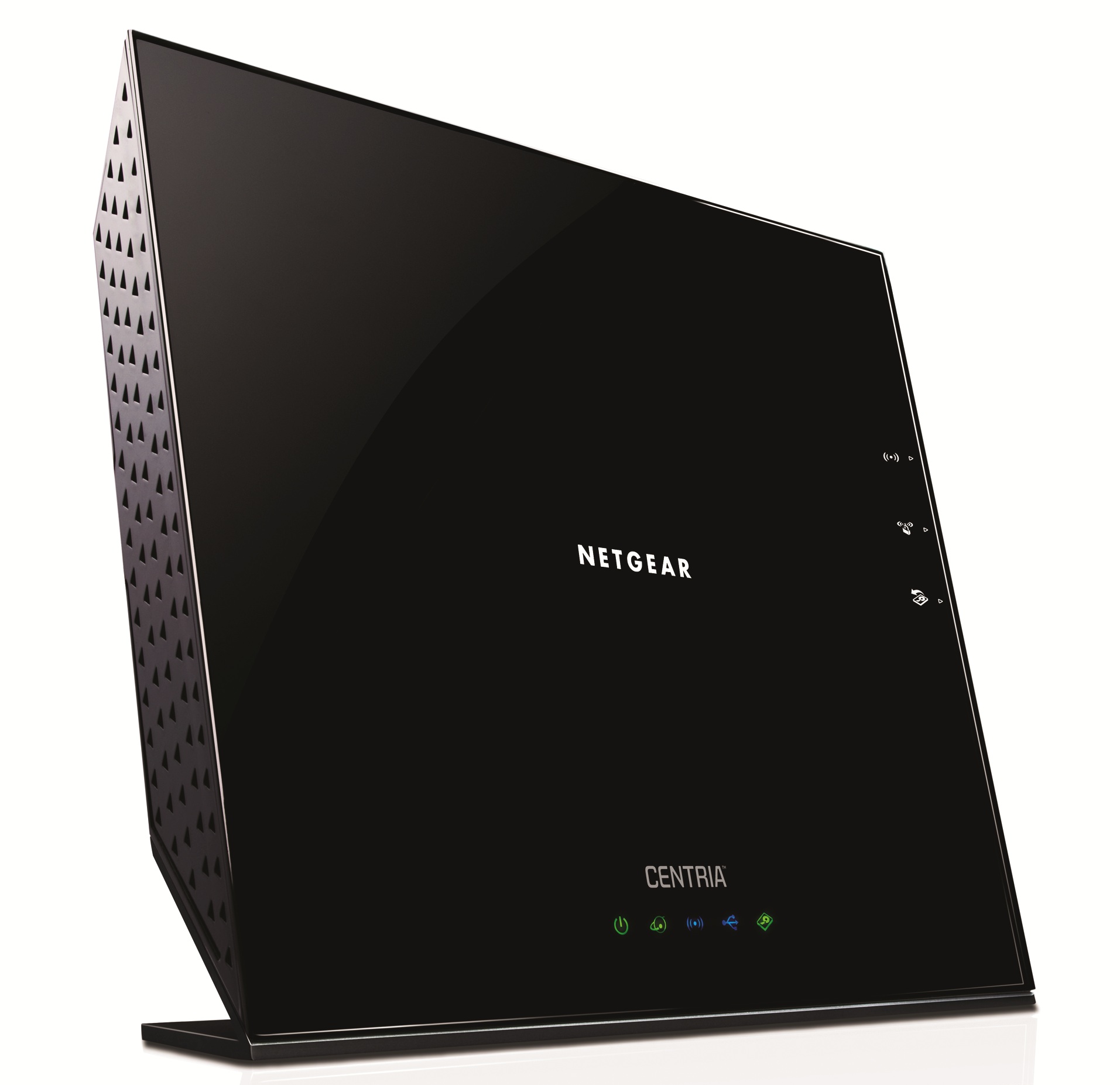 Apple’s Time Capsule network storage/wireless router is a fine device, but it often doesn’t offer all the flexibility people desire. For instance, my in-laws were after some of the functionality of a Time Capsule (back-up, fast wireless), but they also have a PC (along with a few Macs) and wanted DLNA storage for their Roku video player and some Cloud access to their files from both computers and iOS devices.

That’s where Netgear’s new Centria WNDR4700 comes in. Released last month and available in 2TB and $188 empty configurations, the Netgear Centria is a very nice looking Time Capsule replacement that can save a few bucks and add some missing capabilities. It comes with the same dual 802.11N radios and 4-port Gigabit Ethernet switch, but it adds two USB 3 ports compared to the Time Capsule’s single USB 2.0 port…

Setup isn’t Apple-easy, but it also isn’t hard. The hard drive comes formatted (if you get one without—formatting takes awhile and only goes up to 2TB internally at the moment). There is a setup ‘Genie’ that takes you through most of your wireless settings, including changing the passwords and setting up a Cloud account. 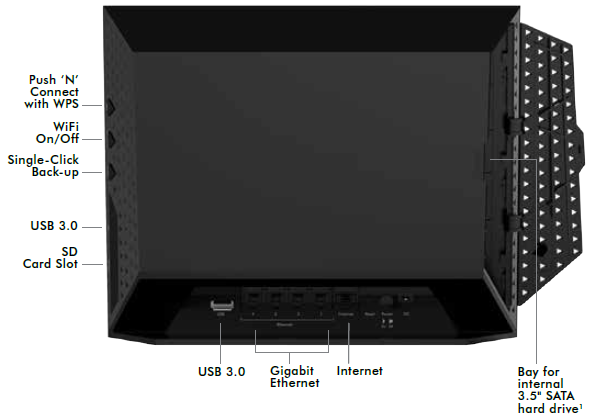 Network Printing is one area where the Time Capsule handily beats the Centria. Netgear requires that you put a small utility on your PC/Mac client machines that must be active when you want to print, rather than printing to a typical print server-type configuration. The upside is that it makes printers AirPrint compatible.

Network speed is as good—if not better— than a recently tested Time Capsule, and I got a much better range unscientifically (out to the street in suburbia). Netgear also allows you to create separate networks for 5GHz and 2.4GHz and open and close guest networks at the same time.

A bonus feature is the easy SDCard backup. Inserting an SD card and pushing a button starts an automatic backup of the SD. Nice-to-have.

Time Machine updates over wireless and wired and both worked fine over about a week of testing. I haven’t had good luck with Time Machine backups in general, so I like to do manual backups every month or so. 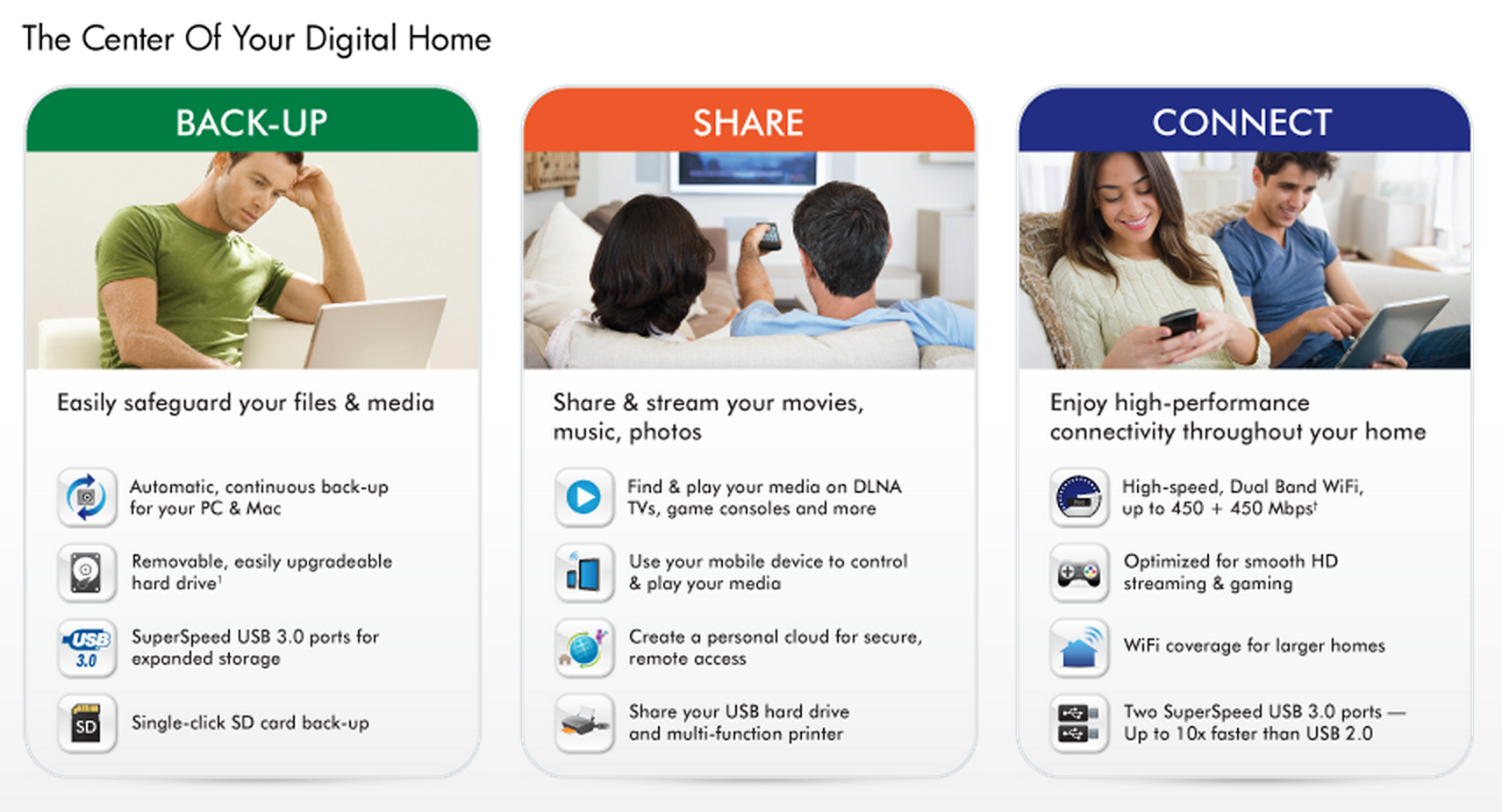 A small quibble: The fan/hard drive is significantly noisier than a Time Capsule—which is almost silent. Keep that in mind if this thing isn’t going to be living in a closet.

One area where the Centria beats Time Capsule is adding an external USB drive. The 10x USB 3 definitely shows up here and almost matches the internal drive when it comes to backup speed.

The Apps for both iOS and Android are rudimentary. You can download and play videos/pictures/audio from any Internet connection, but it isn’t nearly as robust as Synology’s DiskStation apps for instance. Here’s an iPad screenshot: 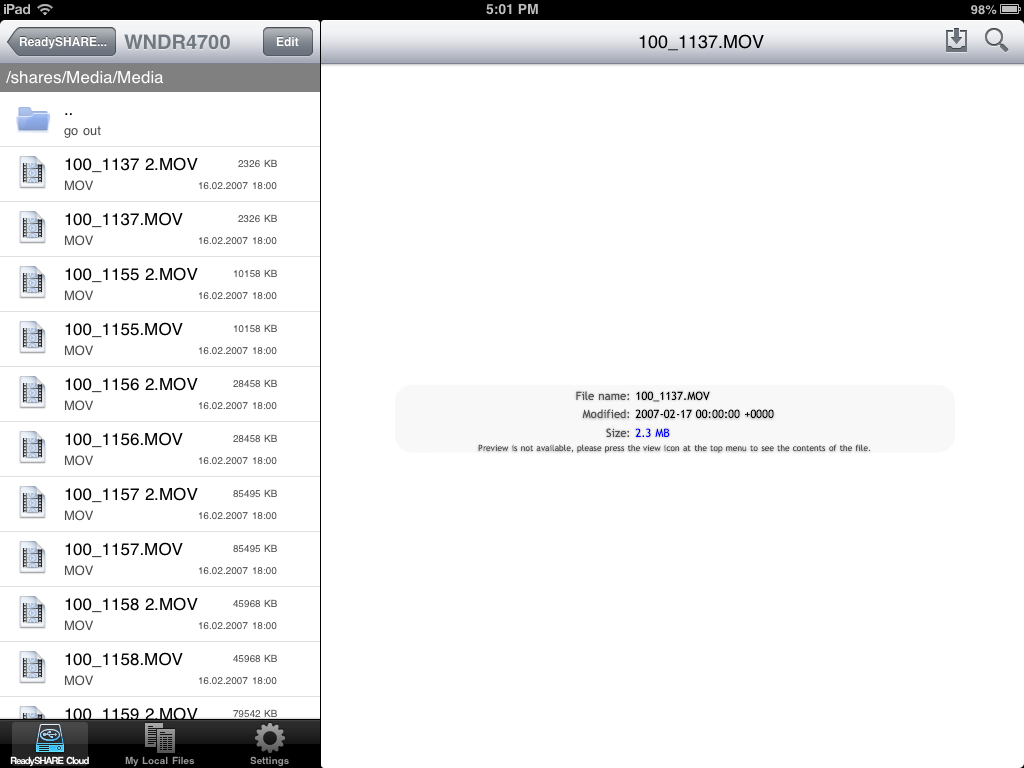 If you have PCs that you want to back up and share data, the Centria is definitely a bonus. It has automatic backups for PC users and better Windows-sharing options.

From a networking perspective, you have a lot more granular access to port forwarding and QoS than you have on a Time Capsule. Most people won’t find that important.

The Netgear Centria is a nice midrange wireless router/network attached-server option for Mac users and people in a mixed Mac/PC environment. The printing and setup complexity is easily outweighed by its much broader feature set. Things like faster USB 3 connections, SD Card access, easy hard drive upgrades, iOS app/printing, DLNA and Windows compatibility push it over the Time Capsule.

Me, personally? I still prefer the more complicated Synology Diskstation coupled with a DD-WRT compatible Cisco Linksys Gig router at my home, but it is hard to beat this as a simpler replacement.

The lowest price I can find for this is $186 Amazon without HD ($350 with). Note: If you buy a >2TB drive, you’ll need to format the drive outside of the box. The Centria can only format 2TB drives in its current configuration. Here’s a good Western Digital line and a good Seagate line, and both are tested to run on the Centria.