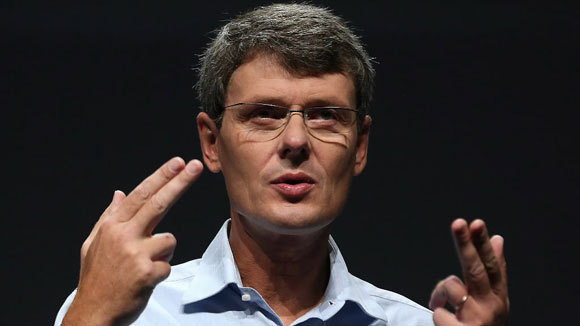 The CEO of BlackBerry, whose market cap is around $7.7 billion at the time of this writing, had some nice words and some harsh words for the folks doing the innovating over at Apple. According to the Australian Financial Review, Thorsten Heins doesn’t think Apple has done much in the way of innovation since its original and revolutionary iPhone touch-design in 2007.

“Apple did a fantastic job in bringing touch devices to market … They did a fantastic job with the user interface, they are a design icon. There is a reason why they were so successful, and we actually have to admit this and respect that,” Mr Heins said.

“History repeats itself again I guess … the rate of innovation is so high in our industry that if you don’t innovate at that speed you can be replaced pretty quickly. The user interface on the iPhone, with all due respect for what this invention was all about is now five years old.”

Mr Heins said one area that the new BlackBerry phones had surpassed the iPhone was in the ability to multi-task – running multiple apps at once – meaning that users could work in the same fashion on their smartphone as they liked to on a laptop.

Along with Samsung, other phone makers, like HTC and Nokia have also impressed industry watchers with the quality of their top-end smartphones, leading to questions about whether Apple needs to speed up its release cycle of new iPhones.

“The point is that you can never stand still. It is true for us as well. Launching BB10 just put us on the starting grid of the wider mobile computing grand prix, and now we need to win it,” Mr Heins said.

BlackBerry’s market share has collapsed in recent years and its hopes of survival are now pinned on the new BlackBerry 10 devices. With the $7.7 billion market valuation (much less than Apple’s quarterly profits), it doesn’t seem like investors are putting much faith in the new OS’s key differentiators that include multi-tasking of up to eight apps, BlackBerry Enterprise Server integration, and BlackBerry Messaging.

Reviews of the new BB10 phones have mostly been even-keeled to favorable, but most reviewers wonder if there is enough in the phones to turn the tide. With the new BB OS, IT integrators will face the question of whether to jump to the new OS or use one of the market leaders like iOS or Android.

As for tablets, Heins is taking a more measured approach by noting Apple’s iPad owns the space.

Former Apple CEO Steve Jobs told an analyst conference call that he viewed RIM [Blackberry] to be in Apple’s ‘rearview mirror’ in 2010.