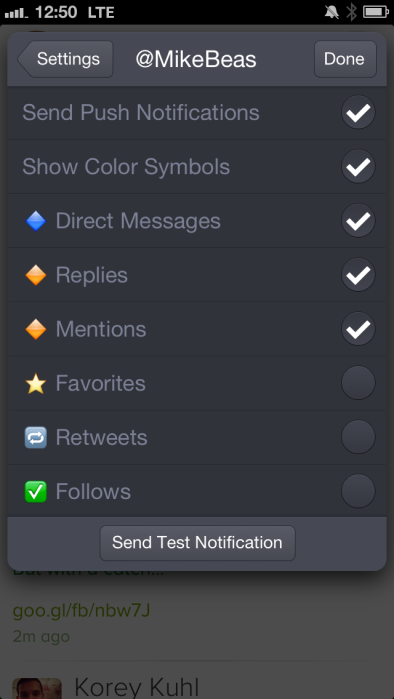 Until today, Twitterrific users had to rely on a third-party service called Boxcar for notifications. Boxcar’s service has become somewhat finicky over the last few years and put a bit of a sour note on the launch of the completely refreshed interface in December. In fact, the lack of native push notifications was one of the biggest issues in our original review.

Unfortunately, the notifications aren’t available for all users just yet, and they are being considered a “beta” feature right now according to the Iconfactory. In fact, only 1,000 users will receive push notification access initially. These users will be granted access on a first-come, first-served basis. As with Tweetbot’s launch of push, “getting in” will just be a matter of installing the update, racing to the notifications settings, and enabling at least one option before all the slots are gone.

Once notifications are enabled for your Twitter account, you’ll be able to get notifications for that account on all of your devices. You’ll have to repeat the process for any other accounts you want notifications on. More users will be added to this pool in the coming weeks, but for now it’s just a matter of racing to be the first to get in.

Twitterrific 5.2 also has a few other new features and fixes:

• Profiles redesigned to display user banners • Discussions can now be shared via email & Storify • Droplr thumbnails now display in the timeline • The timeline can now display up to 600 tweets (was 400) • Various changes to make VoiceOver less verbose • Bug fixes, UI tweaks and much more

If you’ve waited for proper push notifications before purchasing Twitterrific 5, you can get it now for $2.99 in the App Store. The update is free for anyone who has already purchased version 5.