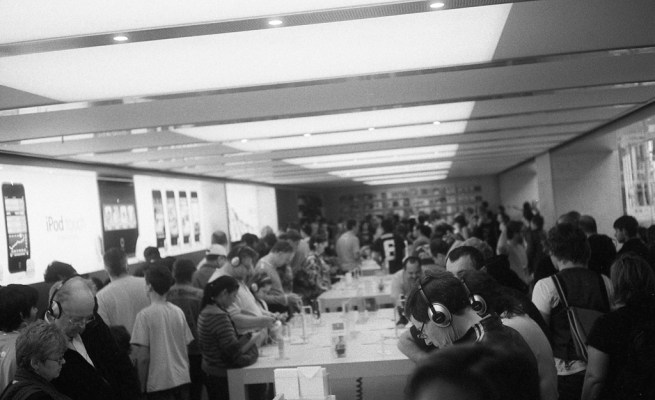 Apple is slowly rolling out a new customer service initiative across its retail stores called ‘table selling.’ With the new strategy, Apple Store employees are assigned a product table where they are responsible for working with groups of customers with different needs, albeit the same device, according to people familiar with the strategy. Previously, customers were individually helped on a first-come, first-serve basis and organized by an “iQueue” system that often resulted in lengthy wait times and customers walking out.

While helping multiple customers with similar purchases might help Apple sell more iPads and iPhones at a more rapid pace, the new strategy does not go without its fair share of criticism. Some Apple Store employees believe the new approach could be too transactional and take away from the personal experience the Apple Store offers.

“I don’t think everyone has the same questions or needs,” an Apple Store employee familiar with the strategy said. “I feel like it’s slowly turning us into Best Buy. Every time I go to Best Buy, there is one guy barely able to handle and help 5 people all wanting different things. [Group selling] is taking away what used to make Apple special,” this person added.

Apple’s approach to retail has historically been nonconventional since debuting its Apple Store concept in 2001. The company replaced traditional paper signs with highly interactive and informative iPad Smart Signs nearly two years ago. Apple has since spent much time training its customers on how to utilize their technology, even in their stores. For example, each Smart Sign featured a ’Specialist’ button that allowed the customer to join the “iQueue.”

Additionally, Apple is also adding a new support role called “Dibs.” The “Dibber” will be responsible for filtering out non-Apple supported services. Apple corporate is emphasizing that its Retail employees should only provide minor support on third-party products. For example, if a customer is having an issue with a non-Apple built Mac app or non-iCloud email service, Apple retail employees should point the employees to the respective support sites for those products.

While the Apple Store ranked number one in sales per square foot the past two years (it earned twice as much as its closest competitor Tiffany’s in 2012), the retail space has faced increasingly crowded shopping quarters as a result of its rapidly growing popularity.

Tim Cook addressed the spacial constraints many Apple Stores face last February while speaking at the Goldman Sachs Technology and Internet Conference. “Some of our stores aren’t big enough. But like cash, it’s a good problem to have,” according to Tim Cook. “So this year we’re closing 20 stores and moving them to larger spaces,” the Apple CEO added.

Former SVP of Retail John Browett most notably had a different approach to the problem. Browett declared the Apple Stores too crowded, and believed reducing the number of employees was the solution, cutting hours of part time employees and freezing hiring of new workers. The outcry was impossible to silence and a reversal and apology followed.

Browett was fired last fall leading the retail division to report directly to CEO Tim Cook, but the values reflected by this new group selling strategy feel dangerously familiar those during Browett’s tenure.