As someone with years of experience of pushing the battery-life of laptops to the limit, the iPad was something of a revelation. If we ignore the time I stupidly left the Smartcover auto on/off engaged while it was in a bicycle pannier on a London to Paris cycle ride, I’ve literally never run out of power.

However, since I was reviewing the Digital Treasures Powerflask, I thought I would look at the company’s Props Power Case at the same time. The concept is a simple one: a protective case with a built-in battery. Plug your iPad into the case, and the case provides the power…

The case is made from the same faux-leather as the Powerflask, with the same red stitching. The feel of the material gives it away, as I mentioned in the Powerflask review, but it certainly looks the part.

At first glance, the Power Case looks a little bulky. Both front and back covers are two-ply: the rear cover housing the battery, as well as the front using the typical hinged flap approach to hold the iPad upright when in use. In reality, the battery section is pretty much the exact thickness of my Logitech Ultrathin Keyboard. It just feels thicker as it looks like a standard leather case, and we automatically expect it to be equally thin.

The iPad clips into the case with the fairly standard approach of four semi-flexible corner clips. Fitting an iPad 2 into it is very slightly fiddly, but it is held securely once in place.

The right-hand side of the case holds the only visible sign that there is anything special about this case: a black plastic strip with a power input socket, a micro-USB power output socket, an on switch and the same four tiny blue power indicator LEDs as the Powerflask.

With the case closed, it is significantly thicker than most cases at exactly 1 inch. However, it still fit into the same slot in my bag that I use to store my iPad with the Logitech case, and the case doesn’t feel like it adds any significant weight.

With the battery in the rear cover, you’d expect that side of the case to be rigid, and it is. Perhaps more surprisingly, the front cover is also stiff. With the thickness, rigidity, and slightly rubberized interior, this feels like a case that will leave your iPad well protected against pretty much anything short of an air-to-ground missile attack. 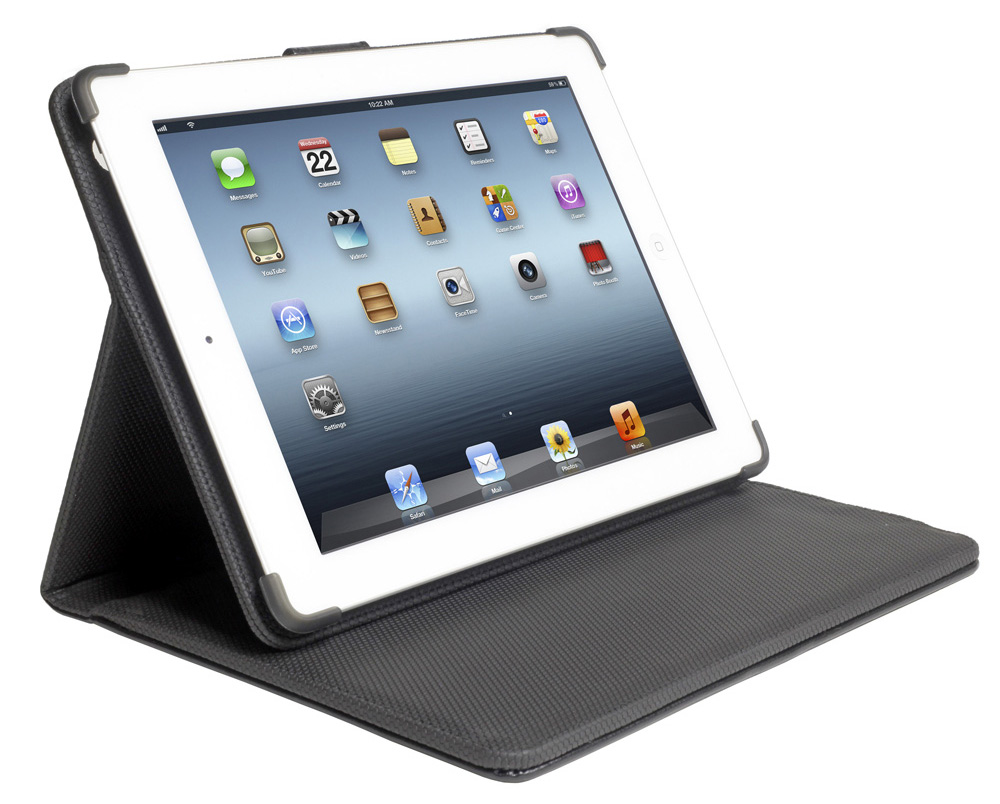 The rubberized interior also serves a second purpose: its non-slip surface means that you can literally position the iPad at any angle and it reliably stays put. This is a big improvement on cases that offer a limited number of fixed angles.

Who’d have thought 10 years ago that we’d update the firmware in our fridges and charge our cases?

The current version of the case has a non-standard power input socket that uses a supplied cable to charge from a USB power source. A future revision will allow both power input and output to use the same micro-USB socket. Either way, it can be charged from either a mains socket (with adapter) or laptop. But charging it fully on mains took around 12 hours, so I wouldn’t recommend relying on a laptop to charge it overnight.

The four blue LEDs light up in sequence while charging, and it’s fully charged when all four are solid and not flashing.

The case is supplied with a short flylead around 3 inches long. At one end is a micro-USB plug that slots into the output port on the case, and the other has a standard USB socket. The instruction leaflet said to use your existing USB cable to plug into this. 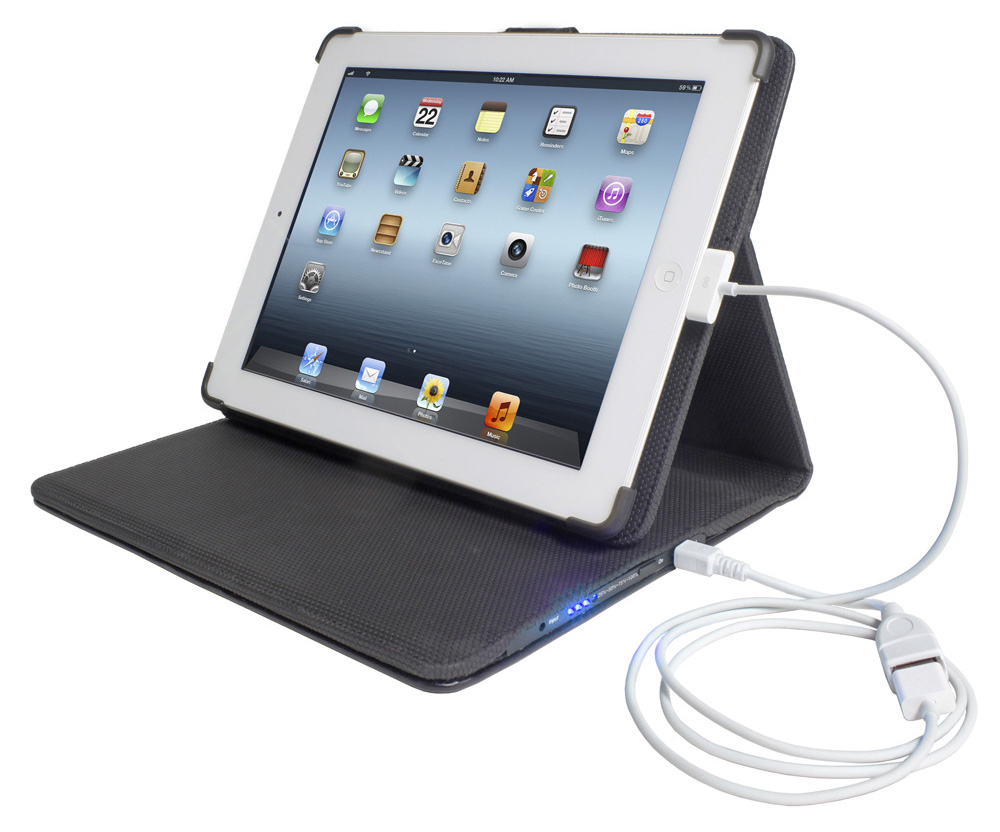 This is my one grumble with the case. On the plus side, providing a standard USB socket means you can connect either a 30-pin or Lightning connector to suit older or newer iPads. However, on the downside, the existing cables we own are likely to be a foot or more in length. Since the cable hangs outside the case, this is a little unwieldy.

You can tuck the spare cable length behind the flap to get most of it out of sight, but with the dongle and more cable length than you need, it feels messy (especially as the case is black and most cables are white).

I was hoping that I could use the iPad without plugging it in while actually in use, and then plug it in to recharge while it was in my bag. But, with two connectors sticking out, it risks snagging one or both connectors on your bag. It’s not a big deal, but it does feel like a less than optimal approach. Putting the battery immediately behind the iPad and using a short length of ribbon connector would be so much neater.

The arrangement does mean, though, you can use the case to charge other USB-powered devices like an iPhone. 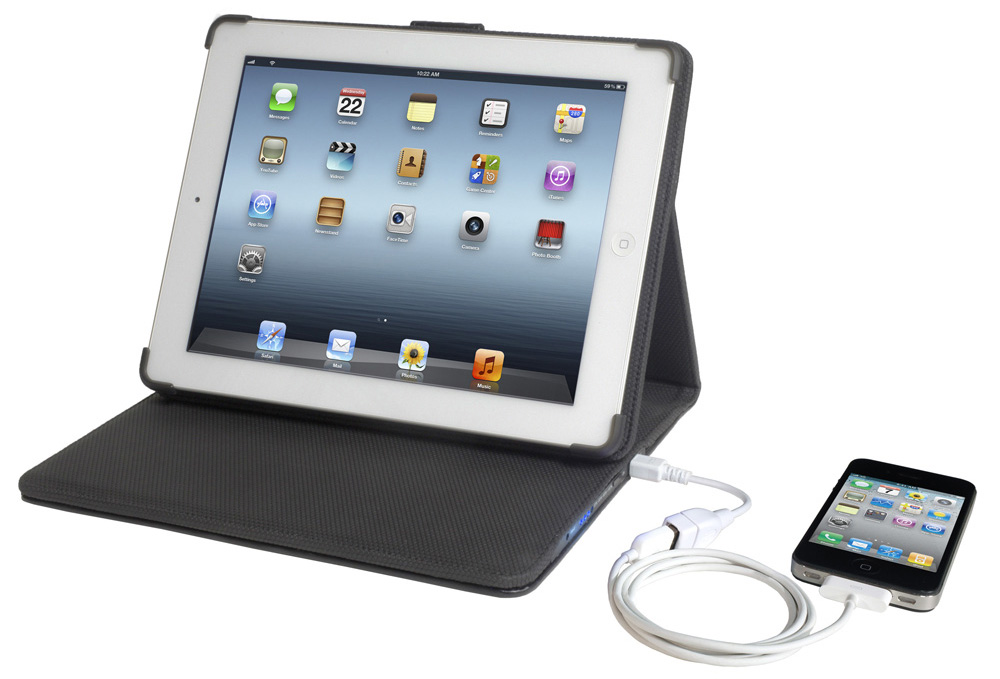 I tested the 8000mAh version with my iPad 2, charging the iPad to full, setting it not to power down, and then using it normally at my standard brightness level of around 50 percent. The sums said I should get 11.5 hours usage from my iPad 2 with the iPad’s own battery remaining fully charged.

Unlike the Powerflask, however, the practice didn’t match the theory: the Power Case battery powered the iPad for a touch over 6 hours—just over half what the numbers suggested.

Separately, we also had a chance to test out a similar iPad battery case, one that is designed specifically for Apple’s iPad mini. This case, the “Enduro Mini” costs $59.99, comes in black, pink, and blue, and offers an 8000mAh battery. The setup process and feature set is very similar to the full-size iPad’s Digital Treasures case discussed in this review.

As I mentioned at the outset, I’m not the target market for this case. I have yet to exhaust the battery of my iPad, despite using it very extensively while out and about.

I’m also a firm fan of keyboard cases, having used the Logitech Ultrathin Keyboard Cover since it was launched. Indeed—such is my addiction to same that I carried the keyboard as well during this test and slotted it under the Power Case flap in a Heath Robinson-ish arrangement that worked but didn’t exactly look like a solution designed by Jony Ive.

But for those who can manage with the on-screen keyboard, and who need more than 10 hours’ use per day, the Power Case provides a workmanlike if somewhat inelegant solution. With the ribbon cable arrangement I suggested, it would be significantly more aesthetically pleasing in use.