iPad keyboards helped kickstart the move from content consumption on an iPad to creation. First there was the iPad dock which you could use in conjunction with a Bluetooth keyboard to get some serious writing done. But docks aren’t very portable.

Next came keyboard attachments – two of my favorites are from Logitech and Zagg – but they don’t offer much protection if you drop your iPad (in fact you may notice a slight crack at the top right of my screen there *ahem).

This week, both Belkin (Ultimate Keyboard Case. $99) and Logitech (Keyboard Folio $99) began selling keyboard cases that actually offer up some protection from falls.

(also check out the  ZaggFolio which also offers backlighting and comes in at $99-129. We’ll review that in the coming weeks).

I can say after a week of use, both of these keyboards are excellent and you can’t really go wrong with either of them. They both provide protection from drops (though I’d say without testing that the Logitech offers more protection), offer a stand (the Belkin has more viewing angles), have great keyboards (I liked the Logitech keys slightly better) and look great (advantage Belkin). On a more granular level:

Thickness/appearance:
The most noticeable difference is the thickness. The Belkin is very thin, maybe just doubling the thickness of the iPad itself and it will slide into your backpack or just about anywhere your iPad has been hanging out. It is also a very Apple-looking Aluminum on the bottom of the keyboard and a faux leather/black plastic case on top.

Meanwhile the Logitech adds some extra layers of protection at the cost of being a little clunkier. The Logitech comes in some fun colors (see video below) but its canvas-y exterior isn’t quite as sophisticated as Belkin’s, though the ribbon label is a nice touch.

Keyboard:
Both have 5 rows and don’t have the separate function row that I like on Zagg’s iPad keyboards.  Otherwise, they are very similar in scope. Belkin has some additional functions on the bottom row like a dedicated Siri button and the ‘@’ symbol. I did have just a little bit of pairing problems with the Belkin _ the button is over the ‘=’ sign and it didn’t immediately appear on my iPad’s Bluetooth scanner. 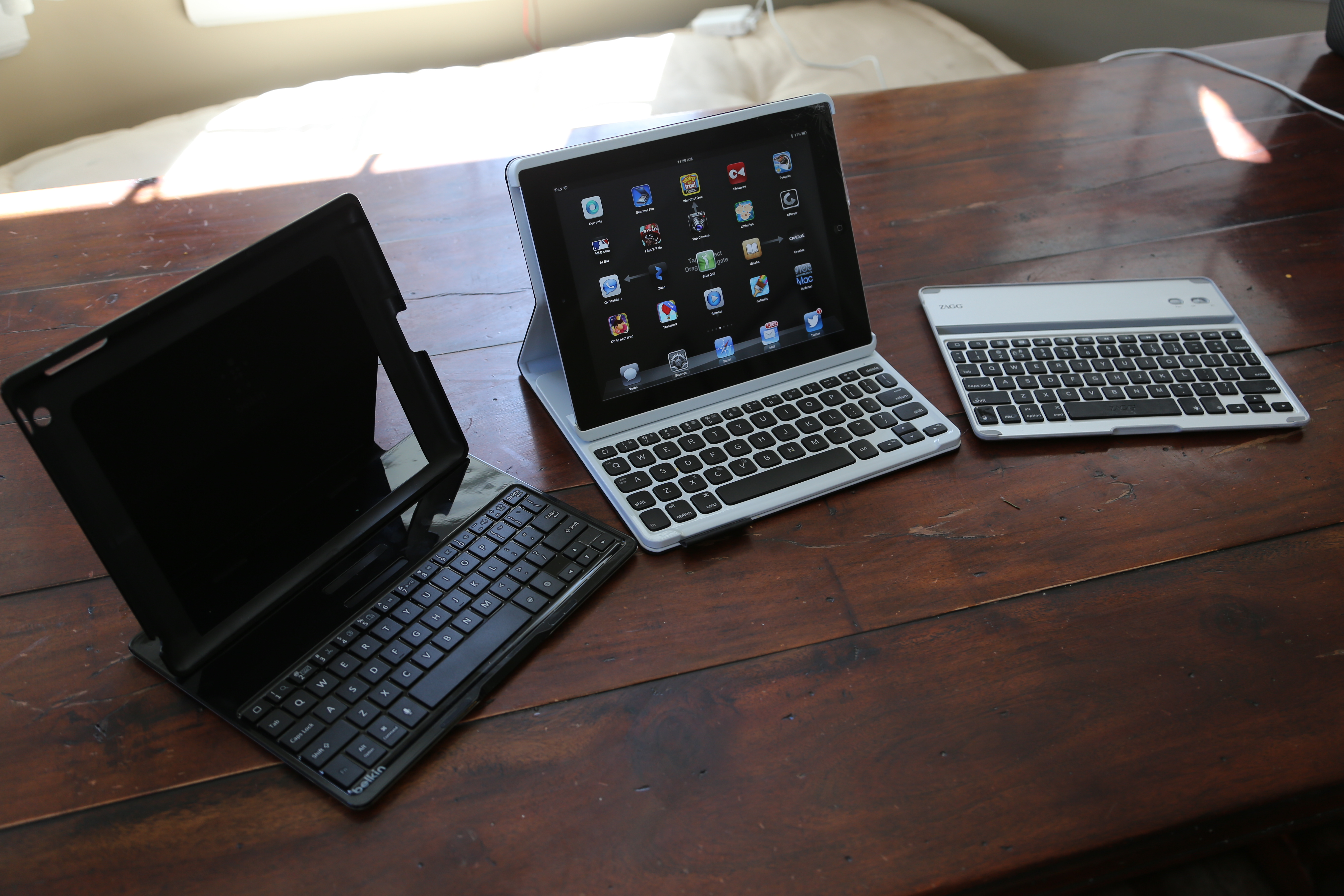 Logitech’s keys are more rounded and have a better press mechanism. Logitech also makes its keys bigger and closer to actual size with tricks like combining the CAPS LOCK and A keys (trust me, it just works).

Fit an finish:
Logitech feels a little better put together overall but closed, Belkin definitely looks better. The magnet locking mechanism on both is solid but it’s a little more solid on the Logitech, though there are three different viewing angles on the Belkin. 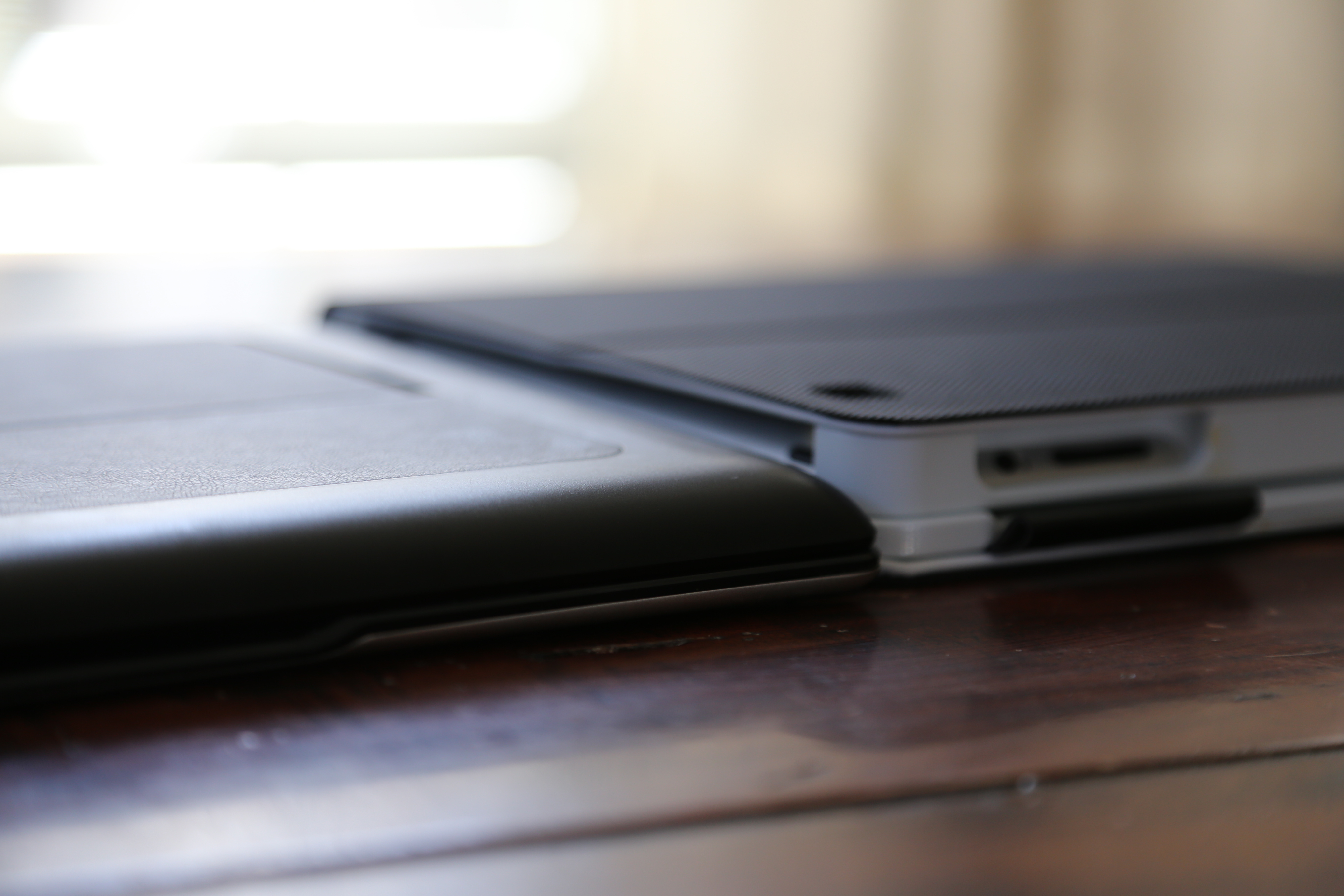 Availability: Both are $99 but Belkin is still a pre-order while Logitech is shipping now.

If you are after a small, good looking package with multiple viewing angles and don’t mind sacrificing keyboard quality and iPad-droppin’ durability, the Belkin is for you. On the other hand, if you are like me, protection and a good keyboard are priorities, you’ll snap up the Logitech Keyboard Folio which I’m calling the winner.