Review: Belkin Wemo Switch & Motion – home automation for the rest of us 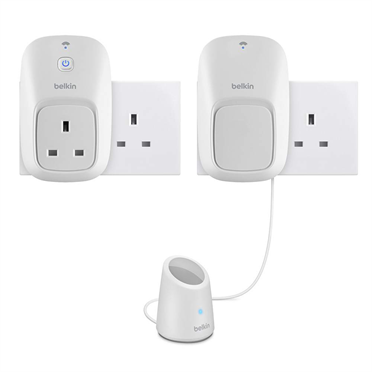 Anyone who grew up reading Sci-Fi will know that by now we’re all supposed to be driving hover-cars and living in fully-automated homes, with Star Trek-style swishy doors and cookers we can talk to.

Home automation hasn’t really happened, unless you are either very wealthy, very geeky or both. What Belkin has set out to do with its Wemo products is provide at least a touch of home automation for the rest of us: something affordable, and easy to use …

There are three products so far: Wemo Switch (a plug socket), Switch and Motion (a plug socket bundled with a motion detector) and Baby Monitor (a baby monitor you can listen to via 3G as well as wifi).

I’m testing the Switch & Motion pack. The free iPhone app allows you to control the plug socket manually (effectively using your iPhone as a remote control), to create rules for it (for example, switching a light on and off at preset times) or have it activated by a combination of the motion sensor and rules – which we’ll get to.

Both units are made from impact-resistant white plastic. Not quite up there with anodized aluminum, but then affordable is a key aim here. They look smart and the build quality feels good.

The plug socket looks like a slightly oversized overseas adapter plug, with a small LED to indicate wifi activity and a power switch that lights up blue. The motion sensor comes in two parts – one looking something like a blanked-off socket, then the motion sensor itself connected by a six-foot white wire.

The unit comes with an instruction card with only four sentences on it, which certainly suggested that it should be easy to setup but left me wondering how easy it was going to be to create rules-based triggers without a user-guide.

The devices are wifi-based, so the first job is to get them registered on our wifi network. Usually, adding a device to a wifi network involves many steps and much swearing. But here I was delighted: Belkin has created the world’s easiest wifi setup.

The secret is that each Wemo unit generates its own wifi network. Yes, that plug socket is also a wireless router. Plug it in, go to your iPhone wifi settings and look for the Wemo device. Connect to it, and it’ll present you with a list of the wifi networks it can see and ask you which one is yours. You touch yours on the list and it asks you for the wifi password. Enter this, and the device automatically connects to the network. The whole thing takes literally 30 seconds.

This is networking the way it should be done. It really is a killer feature, allowing the most non-technical person to set it up.

Repeat for the motion-sensor, and we’re in business.

You can name your Wemo devices, for example ‘Living room lamp’ and also assign a photo to them. Just use your iPhone to take a photo of the device it is controlling, or the room it is in, and then choose that photo from your camera-roll. Again, beautifully simple. 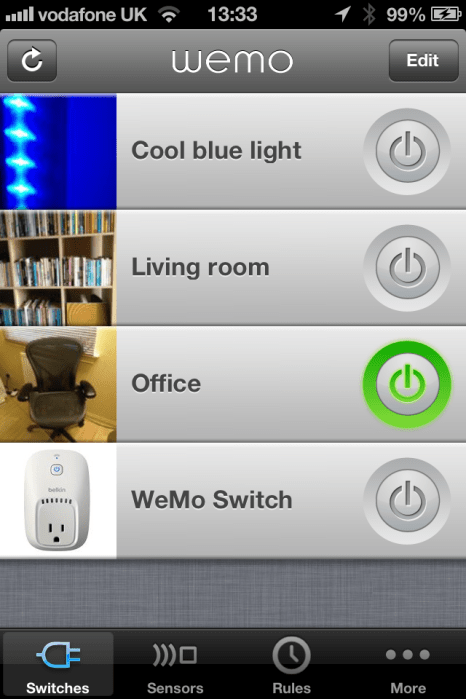 The units do of course have the usual problem with almost every power plug these days: they are over-sized, and you can’t fit two of them into adjacent sockets unless the sockets have switches to space them out. One day, house builders will catch up with today’s techs and install sockets with wider spacing.

Manual control is straightforward. The main screen shows you a list of the plug sockets (which Belkin call Switches), together with the names and photos you assigned. In the screengrab above, you can see that I already had three of the sockets, and that the office light is lit. Touch a button to toggle it on/off.

The only issue to be aware of here is there is a slight delay between touching a switch, the device responding and the switch status changing in the app. Usually, this is a momentary delay, but on occasion it took a couple of seconds, which can lead to pressing it again with consequent confusion when it catches up.

The effortless setup I described earlier didn’t just connect your devices to your own wifi network, it also connected them to the Internet. Yep, you can now control any of your Wemo-connected devices from anywhere in the world.

I must say I haven’t yet found an application for the ‘anywhere in the world’ part, but I do like being able to switch the kettle on as I approach my home.

Of course, a remote-controlled plug socket is nice, but isn’t really home automation – even if you can turn on your living-room light from Shanghai. So the Wemo app allows you create rules for automated activation. Three different rules are available:

This rather basic-sounding set of rules is surprisingly powerful. Let’s take an example. This is a rule I created to control a landing light: 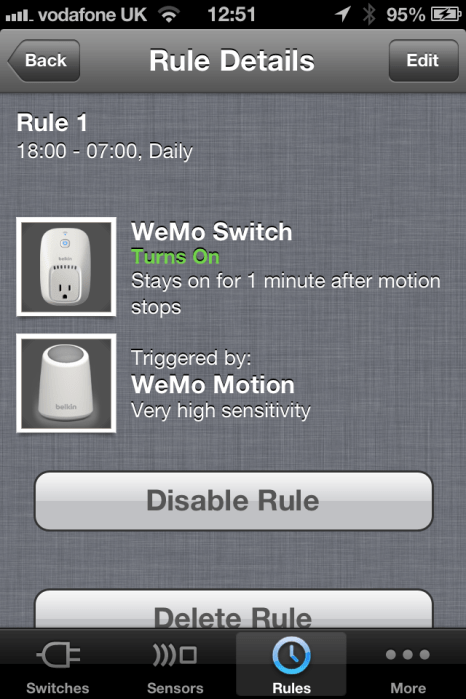 This tells the landing light to switch on when motion is detected, and then to switch off a minute later – but only if it’s night.

Creating this rule was extremely simple. First, I selected Turn on/off it motion: 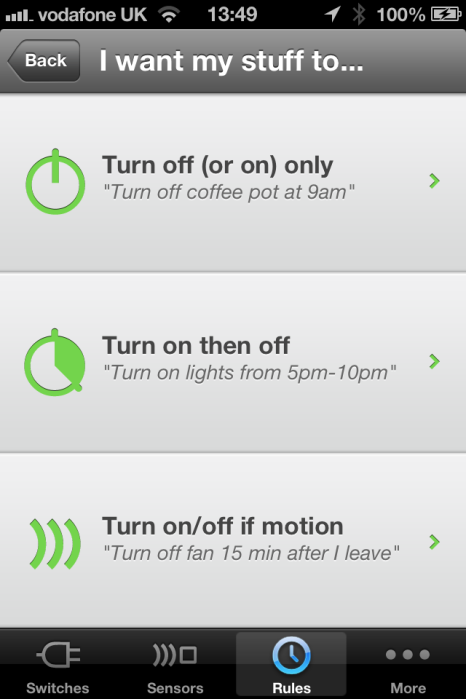 The app asked me for four pieces of information: 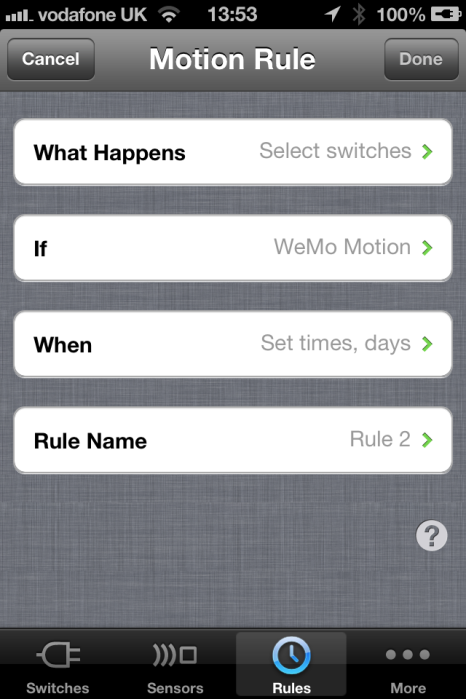 When I tapped What happens, it showed me the list of Wemo devices on my network, I touched the one I wanted, and was offered a list of actions: 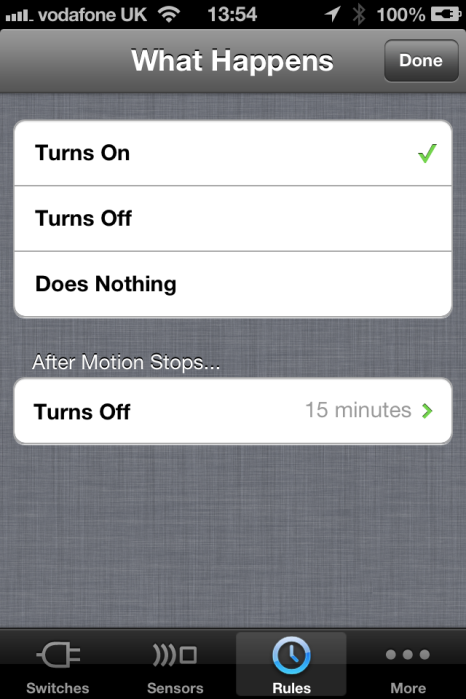 I selected Turns on. The default is that it switches off again 15 minutes after motion stops, presumably to allow for people going out of range of the sensor. This struck me as too long, so I hit the time and changed it to 1 minute. I set the start time to 6pm and then end time to 7am, so it wouldn’t operate in daylight.

Then I hit Done. That’s it.

So far, that all sounds great. There are, unfortunately, a few flaws.

First, while Belkin has managed to transform wifi network setup from a dark art requiring the sacrificing of goats to something my gran could do, the company needs to do some work on the reliability of the switches. They randomly lose connectivity at least every few days. Sometimes for a few seconds, sometimes until you reset the app.

Second, the app itself can sometimes hang. It’s not always obvious when this has and hasn’t happened: I mentioned that switches can take a little time to respond, and the same is true of the app itself. For example, when I touch the Rules button, there is a delay of half a second to a second before the app responds. There are times, however, when it simply fails to respond at all. When that happens, you have to exit to the homescreen, bring up the task list and delete it from there before re-opening. Sometimes it will immediately crash on re-opening, though opening it once more has so far always worked.

Third, the app constantly requests firmware updates. If you accept, sometimes it says it is updating the firmware, other times it doesn’t. In both cases, you tend to lose switches from the display afterwards. Until this issue is resolved, my advice is to decline the updates – but even this is a pain when they are sometimes offered several times a day.

The firmware update issue is, however, the only one to happen more than once a day. The switches and app otherwise experience transient problems perhaps every few days.

I have a low tolerance for flakey technology. Usually, I need something to be pretty close to 100% reliable or I won’t use it. It tells you something about how much I like the Wemo system that I continue to use it despite the flaws I’ve described.

The reliability concerns do, however, mean that I wouldn’t recommend it for anything critical. This is not a system to use for anything medical, security-related or to control business equipment.

But for home use, if you can cope with the slight irritations I’ve described, this is a very simple, affordable and surprisingly powerful way to get into home automation.

Retail prices are $49.99 for the Wemo Switch (plug socket only), $99.99 for the Switch+Motion bundle and $89.99 for the Baby Monitor – but all are currently offered at those Amazon links for discounts ranging from $5 to $20.