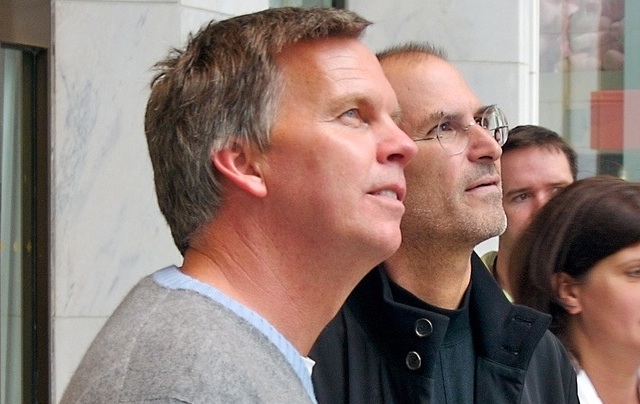 Former Apple Retail Chief Ron Johnson is out at JCPenney after his radical retail redesign failed to ignite sales in the same manner in which Apple Stores had grown accustomed. Ron Johnson left Apple in 2011 for the JCP job after a decade at Apple.  He helped design the original Apple Store concept after being lured away from Target by Apple CEO Steve Jobs. He pioneered concepts like the Genius Bar which was unheard of at the time but still a growing trend in the industry.

We know more than a few folks who would like to see him back at Apple which meanwhile has found him difficult to replace. One such attempt was the hiring and subsequent firing of John Browett, a former Dixon’s UK CEO.

I'd rather see a guy fail like Ron Johnson did any day compared with all the corporate drones who just play it safe all day long.

We’ve reached out to JCP and Apple for comment and will update as appropriate. Press release follows:

(Thomson Reuters ONE via COMTEX) — Plano, Texas, April 8, 2013 – The Board of Directors of J.C. Penney Company, Inc. [NYSE: JCP], today announced that Myron E. (Mike) Ullman, III has rejoined the Company as Chief Executive Officer, effective immediately. He has also been elected to the Board of Directors. Mr. Ullman is a highly accomplished retail industry executive, who served as CEO of jcpenney until late 2011. He succeeds Ron Johnson, who is stepping down and leaving the Company.

Thomas Engibous, Chairman of the Company’s Board of Directors, said, “We are fortunate to have someone with Mike’s proven experience and leadership abilities to take the reins at the Company at this important time. He is well-positioned to quickly analyze the situation jcpenney faces and take steps to improve the Company’s performance.”

Mr. Ullman added, “While jcpenney has faced a difficult period, its legacy as a leader in American retailing is an asset that can be built upon and leveraged. To that end, my plan is to immediately engage with the Company’s customers, team members, vendors and shareholders, to understand their needs, views and insights. With that knowledge, I will work with the leadership team and the Board to develop and clearly articulate a game plan to establish a foundation for future success.”

Mr. Engibous added, “On behalf of the Board of Directors, we would like to thank Ron Johnson for his contributions while at jcpenney and wish him the best in his future endeavors.”

Mike Ullman is a veteran retail industry executive with more than 25 years of experience who has served in leadership roles at several of the world’s best-known retail companies. Prior to spending seven years leading jcpenney, as Chairman and CEO through November 2011 and Executive Chairman through January 2012, he served as Directeur General of the world’s largest luxury group, LVMH Moet Hennessy Louis Vuitton, in Paris; Chairman and Chief Executive Officer of DFS Group Limited, the world’s leading travel retailer; and Chairman and Chief Executive Officer of R.H. Macy & Co., Inc. Mr. Ullman’s prior retail experience also includes leading Wharf Holdings Ltd. in Hong Kong and posts at Federated Department Stores earlier in his career. In addition, he previously served as a White House Fellow in the Reagan Administration, Vice President of Business Affairs at the University of Cincinnati, and as an International Account Manager for IBM Corporation.