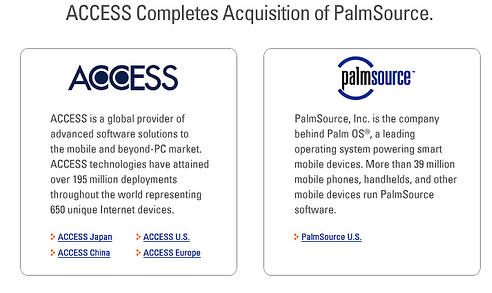 According to documents published on the website of Access (formerly PalmSource), Apple has licensed patents from the portfolios of several former technology companies including some from Palm/PalmSource which were originally bought by HP.

Access appears to own patents from Palm, Bell Communications Research and Geoworks and has licensed them to Apple for 1B Yen.

Microsoft previously took out a license on these same ‘foundational patents’.

It was revealed that Steve Jobs had a heated email exchange with then Palm CEO Ed Colligan where he said Palm’s patents were essentially worthless.

The $1B Yen settlement is about $10M in US dollars at today’s exchange rate, which isn’t worthless but isn’t a lot of money for Apple either. [via Macotakara]