Analysis: That sub-$400 AAPL share dip – what does it really mean? 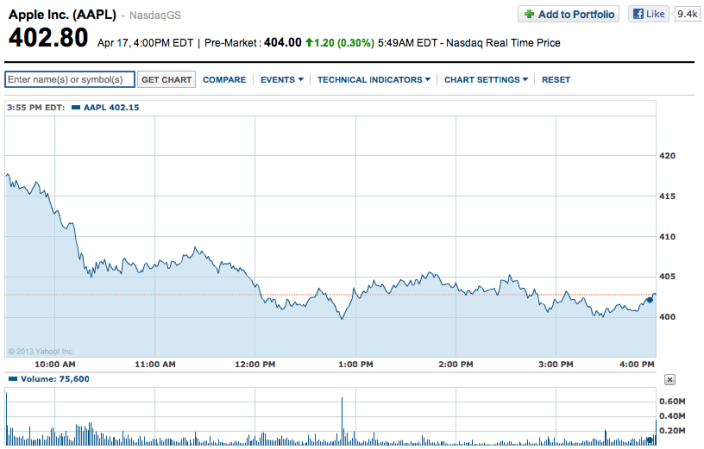 Predictably, AAPL’s brief dip below $400 yesterday is resulting in a lot of excited reporting in the press, but how much does it all really mean?

The 5.5 percent slide yesterday was a combination of two factors. First, yesterday was a bad day for the market as a whole, with broad selling across a range of US stock triggered by the government reporting slower growth in hiring than the market had expected (via The Economic Times) …

For Apple, the effect was worsened by a key chip supplier, Cirrus Logic, blaming a poor revenue forecast on excess inventory. Since Apple is its biggest customer, the market concluded this meant lower than expected demand for the iPhone and iPad. Whether this is true is a matter of conjecture. As Forbes pointed out:

There is an alternative explanation.  It is conceivable that Cirrus sales are no longer a good indicator of iPhone sales because Apple has found other suppliers.  Apple is a highly secretive company and there is no way to know for sure.  However, the stock market so far seems oblivious to this alternate explanation.

AAPL investors have certainly had a roller-coaster ride over the last 12 months, with the stock trading above $700 in September due to high demand for the iPhone 5 before falling to today’s level just above $400:

There is some genuine bad news in there. As CNN points out, amidst all the speculation about what might happen in the future, there is one cold, hard fact: Apple’s margins – some of the highest in the world – have fallen in the last year.

There are three key reasons: Investors are concerned that the iPhone market has peaked in the western world, supply issues have plagued production of iPhones and iPads, and Apple’s profit margins are falling at an alarming rate.

The margins problem grew worse last quarter as many customers opted to buy older iPhones and the cheaper iPad mini — devices that are less profitable to Apple (AAPL, Fortune 500). Overall, the company’s gross profit margin fell six percentage points over the year to 38.6%.

But most companies – including any of Apple’s competitors – would kill for margins of 38%.

Apple had always made pessimistic revenue forecasts, and always beaten them, so it came to be expected that the company’s performance would always exceed expectations, resulting in some over-heated projections. When Apple failed to meet the more optimistic of these, the market responded with disappointment. Never mind that Apple was the most valuable company in the world, never mind that it was setting new sales records, never mind the huge cash reserves: what counts in the market is reality versus expectations, however inflated those expectations may have been.

Apple switched to providing realistic revenue forecasts, giving a range of figures representing what it expected to be the upper and lower numbers. Whilst this was an understandable attempt to quash the wilder analyst projections, it carries with it the risk of missing the company’s own guidance figures, and the market responding nervously to that.

There is also, of course, the Steve Factor. There is a view that only founder can build value, while managers only maintain it. Apple, perhaps more than any other major company, had one public face: that of Steve Jobs. His successor, Tim Cook, was seen as an excellent ops man rather than an innovator. What has Apple done that’s genuinely new and innovative since Cook took over, came the question?

Take out the roller-coaster element of what’s happened in the past twelve months, and what we’re left with since Cook took over is a flattening of the stock price – something that might be expected when a founder is no longer around and a manager takes over, while the market watches to see what happens next.

If Cook is guilty of anything, it is perhaps failing to understand the need to maintain excitement in the marketplace. Jobs was flamboyant; Cook is understated. While Apple has always been tight-lipped about its plans, with Jobs there was always the sense that something exciting was bubbling away beneath the surface. With Cook, perhaps some of that sense of anticipation has been lost.

And let’s put both yesterday and the past year into context: