Drafts is by far the fastest way to input text on iOS. A blank text field and keyboard greets you as soon as you launch Drafts. No need to fiddle with menus and buttons to reach your intended destination. Write first and decide later.

Nothing is more frustrating than having to first see an inbox begging to distract you before drafting an email.

The same can be said for wanting to jot down a quick note and first being greeted with a list of unrelated, previous notes. Maybe you realize that app isn’t even the best place for that note. Lugging text out of one app and into another isn’t the best use of your time.

As someone obsessed with efficiency and improving my workflow, any unnecessary steps absolutely make me monkey-brained. That’s where Drafts comes in.

While Drafts has always been elegant and simple on the surface, tucked beneath its canvas and keyboard is a drawer jam packed with powerful tools used to send text to numerous apps in iOS.

The latest update overhauls this drawer by introducing four panes in which you can organize different actions. You can also backup your customized action lists using Dropbox, which also allows you to sync your action lists between your iPhone and iPad. 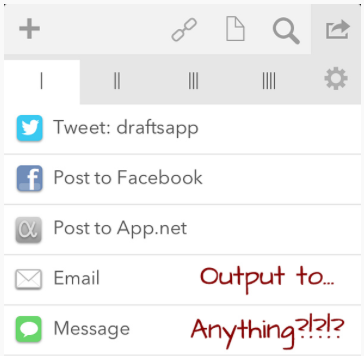 Previously created drafts can now be organized in inbox, archive, and pinned sections, which makes Drafts not only a direction center for text, but also a more organized text management system.

Drafts also introduces Messages and Evernote actions with today’s update, which should be well received.

Creating a Reminders list called Drafts allows you to import text to Drafts from the OS X Reminders app as well as Siri.

The update also adds TextExpander support allowing users to use timestamp and signature snippets to create actions even faster than before.

Both apps are now available in the App Store.