Review: Currency, a streamlined conversion app for your iPhone that may be a tad too simple 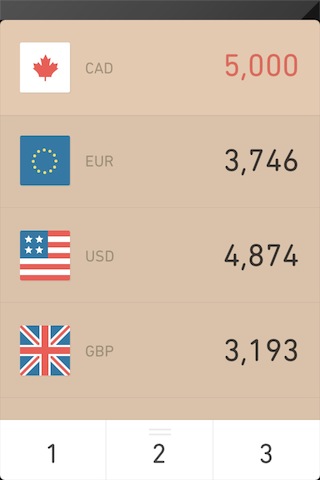 Conversion apps feel like a design playground, with so much potential for uniqueness and variety in their interfaces. The trend has been towards multifunction, multi-purpose Swiss-army knife apps that attempt to cover a whole range of disparate measurements. In my experience, as a result of racing to add one more ratio to their feature list, the simplicity of these apps suffer.

Currency sidesteps this battleground entirely and, as the name implies, focuses solely on converting amounts of money. The app touts support for over 160 currencies from around the world, which was more than enough to satisfy my needs. The app surfaces a handful of common currencies at first launch, each accompanied with a beautiful representation of its respective country’s flag.

The primary currency (which are the ‘from’ units in the conversion) sits at the top of the screen, whilst the ‘to’ conversions appear below in a scrollable list. Customizing the list is a cinch. You can add more currencies by searching, or delete any currencies currently selected with a leftward swipe in a Mailbox-esque fashion. Replacing the primary currency with another is as simple as a single tap on any other currency, which is accompanied by a fast, subtle sliding animation.

The visual style of the app is the very definition of ‘flat’, with no shadows, bevels or other decorations to give the interface any sense of depth. I’m not usually a fan of this design trend, but I have to make an exception here — the adorable square flag icons make Currency positively cute. The font choice is fantastic and the overall color scheme of the app has great contrast and readability.

Moreover, Currency has one of the most satisfying data entry niceties I’ve ever experienced on iOS. Instead of a delete button on the keypad, you swipe the input textbox and simply slide the digits off the screen to remove digits. The interaction is incredibly satisfying. As each number hits the screen edge, it jumps out of line and falls off the string. Each time, the popping animation is slightly different making it feel very organic and real. If necessary, you can slide in the opposite direction and the removed numbers will pop back.

Unfortunately, in other areas, Currency’s aim for simplicity detracts from the enjoyment. For example, the keypad is made retractable in an effort to remove modality, but I find this slightly awkward and visually distracting, as a small sliver of the control has to remain onscreen at all times. It’s visually unappealing and doesn’t really follow with iOS’ interface metaphors, in which the expectation is that controls dismiss completely when not in use. It is ironic that a decision which aimed to remove complexity has caused more confusion.

In a similar vein, the app’s graph feature is hard to understand due to the developer’s reluctance to show additional UI hints in the interface. It makes the app look pretty, but the first few minutes of using the feature were frustrating. There isn’t a help section either, so I had to randomly press buttons until I figured out how to get data to show. Sometimes the graphs would just be a straight line, for instance.

After some trial and error, I got the graph to plot USD in terms of GBP (British Pound) over time. It turns out you have to input a reasonably-large number to get the app to plot, as otherwise bad rounding logic will make the app think its axes span from zero to zero resulting in no plotted line. This is obviously a bug which should be fixed in time. The graphs themselves are nicely presented, but my enjoyment was soured by the initial user experience friction.

The omission of a decimal point key is a less-forgivable decision. This means that the app can only convert between whole amounts — this is my biggest sticking point with Currency. As money transactions involve decimals very frequently, I found this functionally restrictive. Frankly, it was a baffling decision. There is plenty of space for a decimal point button on the keypad (as the zero key is double-width), so I can’t think of a design reason for why it is not present. The developer has promised decimal point support in the future, but for the time being its absence is a frequent annoyance.

Should these pitfalls stop you from buying it? I’d strongly argue “no”. The fact that the biggest issue I can find with this app is the lack of a decimal point key is rather amusing. Other apps fall down way before this point. The innovations in data entry UI alone make it worth the $1.99 price in my mind. A common response to these kind of one-purpose apps is that Google gives you exchange rate calculations for free. Whilst that is true, it’s missing the point. Spending a few dollars on Currency turns that chore into a delightful (and beautiful) convenience.