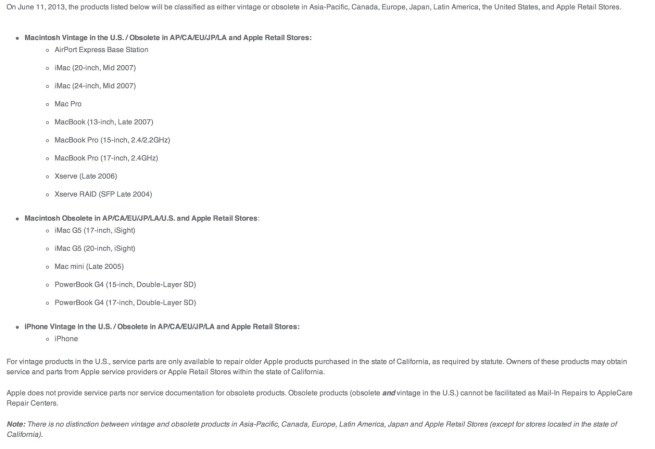 According to internal Apple documentation, the original iPhone, which first debuted in 2007, will soon enter “obsolete” status, with a few exceptions. The official switch will happen on June 11, 2013, when the iPhone, along with several other Macs and Xserve models will officially be classified as vintage and obsolete products by Apple. Thanks, G!

…those that were discontinued more than five and less than seven years ago. Apple has discontinued hardware service for vintage products with the following exception:

-Products purchased in the state of California, United States, as required by statute.

-Owners of vintage Macintosh products may obtain service and parts from Apple service providers within the state of California, United States.

-Owners of vintage iPod products in the state of California may obtain service from Apple Retail Stores or by contacting AppleCare at 1-800-APL-CARE.

An obsolete product, on the other hand, is one that was discontinued more than seven years ago, and will not be supported under any circumstance. It’s worth noting that over 18 months ago, AT&T stopped activating the original iPhone, without any roundabout solution.

While the original iPhone will be now considered obsolete in the U.S. at walk-in Apple stores and around the world, the “vintage” status will still apply with AppleCare  and Authorized Service Providers, meaning it is possible to have the device serviced if you call directly.

Keep in mind, we’re talking about the first-generation iPhone, with its EDGE (2G) connectivity and 128 MB of RAM. Meanwhile, you can buy a blazing fast iPhone 5 with LTE (4G) for as low as $99 in some cases.