Review: Infuse by FireCore is a versatile way to watch videos on your iOS device

As more and more consumers switch to using iOS devices to enjoy media, the need is becoming apparent for a more full featured and well-rounded video player. While Apple’s Videos app provides basic and simple functionality for viewing movies, when it comes to storing, organizing, and viewing your entire library of videos and movies, Apple’s stock app falls flat.

FireCore, the group behind the popular aTV Flash software for jailbroken Apple TVs have released a new app called Infuse, which promises to fix all of that, offering you a versatile way to view and organize videos in a variety of different formats. Let’s check out how it worked.

Upon installing Infuse, the first thing I noticed was how well the app was designed. The interface struck a perfect balance between skeuomorphism, with its textured wood background and red movie curtains, and a traditional sense of how a user interface should behave. When you first the launch the app, you’ll be presented with a card telling you to add movies to the app. Videos can be added from a small selection of sources, primarily interfacing with iTunes. If you’d prefer not loading in your content from iTunes, you can also bring in your video files through the iOS Dropbox app, or through email, all of which are a little tedious. It would be nice to have a more streamlined content importing process. I can’t remember the last time I connected my iPad to iTunes, but I found that the easiest way to get movies on my device. FireCore has informed me that they will be adding the ability to sync files wirelessly from your browser in the future, but that functionality isn’t currently in the app. 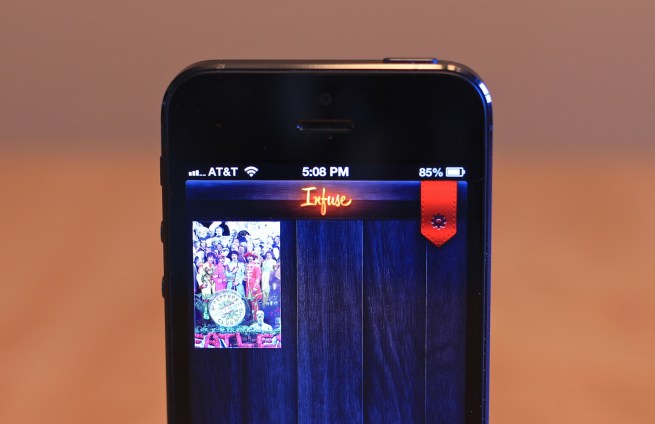 Before you begin to bring your movies into Infuse, you’ll probably want to log in to Trakt. If you haven’t heard of it, Trakt is essentially a tool that allows you to automatically keep track of everything you’ve watched. This process is called “scrobbling.” Infuse has Trakt support baked right into the app allowing Trakt to automatically “scrobble” everything you view. Pulling down on the red ribbon at the top of the screen will allow you to login to Trakt or setup an account. You also have the option of sharing the app with your friends from here as well.

Adding a variety of video formats to Infuse is where the app really shines. Infuse supports 14 different video types, both obscure and widely recognized, ensuring that it’ll be able to handle just about any file that you throw at it. I wasn’t able to dig up examples of all 14 file types to test, but I did try out the AVI, FLV, MP4, M4V, and MOV file formats, and they all worked great, save for a slight stutter that occurred only when playing back HD video and syncing files at the same time, a rare occurrence . Unfortunately, I was unable to get DRM’d content purchased through iTunes to play in Infuse, due to restrictions put in place by Apple in iOS. 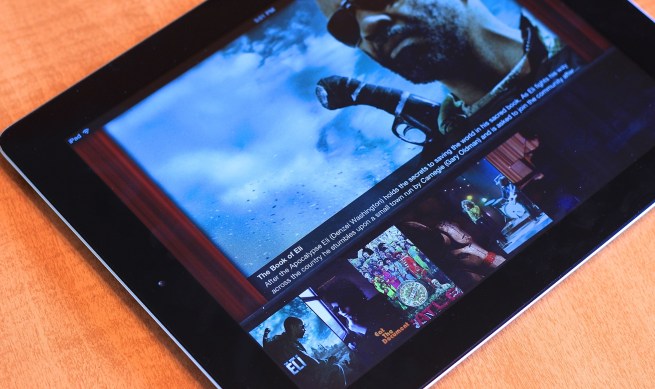 Once you’ve gotten your media into Infuse, you can easily start tweaking it to your liking. On the iPad, all of your videos will appear in a grid towards the bottom of your display, with large movie art cycling through above. These thumbnails and movie art are generated by the app if the movie isn’t known, and are stock movie art if the video can be identified. Overlaid on the bottom of these previews is a synopsis of the film, along with information about the video format itself. If you’re using the iPhone version of Infuse, using the app in portrait will reveal a thumbnailed list of all of your videos, again, the images being automatically generated. Flipping your iPhone into landscape will show you only a scrollable list of your movies with larger poster art, similar to how it appears on the iPad. Tapping on any video in your library will open up a movie “ticket” with metadata about the selected video, all automatically generated. In the case of known films, you’ll be presented with information about the characters in the movie, the plot, and year of release, along with a rating. In more generic video files, you’ll simply see the title of the video along with information about the video and audio format, resolution, and duration.

Hitting the play button on the movie ticket will cause the stub to tear off, and your video will start playing. The player interface looks much as you’d expect from iOS, although the scrubber bar appears to be themed slightly, giving it a unique appearance. In the upper right hand corner of the media controls, you’ll see a small gear icon which allows you to adjust several properties about the currently playing video. From the video tab, you can set the system brightness, change chapters, and change whether or not you’d like to stretch or letterbox your video. The audio tab lets you alternate between tracks if the option is available, and the subtitles tab lets you download subtitles for your movie in a variety of languages. This feature only really works on well known movies that have open subtitle information available about them online, but I found that when it did work, it was very accurate. 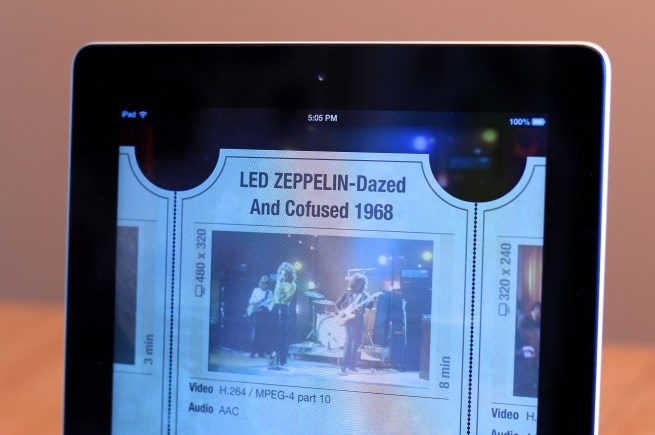 Infuse is probably the first video player I’ve seen for iOS that looks great. The visuals and design of the app are incredible, and I can’t give the UI high enough praise. It’s great. From a functionality standpoint, the app also offers many features that competitors don’t; most notably the ability to play 14 different formats of video without the need to convert and encode, as well as great subtitle and Trakt integration. However, Infuse isn’t perfect. I found the performance on the iPad to be a little slower than I’m used to, and the iTunes video importing process is less than stellar. Additionally, the inability to play DRM’d content from iTunes might be a big problem for those who use iTunes as their primary service for consuming media.

I don’t think that Infuse is meant for the average consumer. It’s meant for those with extensive movie libraries that are scattered across their computers in various formats. Infuse offers a way to consolidate your video collection into one spot on your iOS device, and that’s why people will love it. Infuse is a universal app and is available in the iTunes App Store for $4.99.