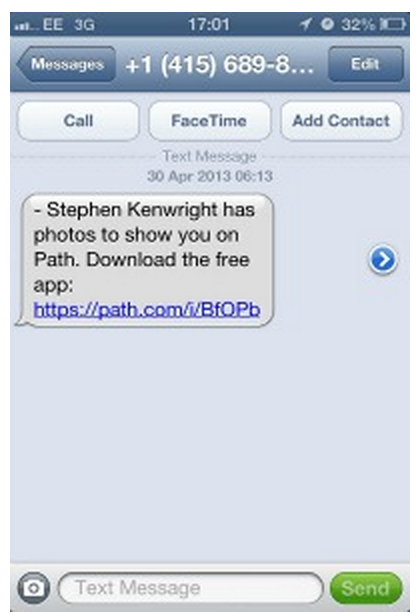 Today a number of reports are flowing in claiming that social network app Path is sending spam messages to people listed in the user’s address book. The issue apparently isn’t new with some Android users on Reddit experiencing the spam a few months back, while a growing number of users on Twitter today have complained of their contacts receiving both spam text messages and calls. The messages, as pictured right, say the user has photos to share on Path and urges the recipient to downed the free Path app.

However, Path confirmed to The Verge that the issue is actually a feature of the app that sends messages to a user’s Facebook friends during sign-up:

“Path is really best with friends and we really want to help users invite the people that they care about to their Path as quickly as possible,” said Nate Johnson, VP of marketing for Path. Johnson said the Path customer service team has reached out to Kenwright, but right now it looks like nothing went wrong with the app… By default, Path assumes you want to send a message to all your Facebook friends, displaying a list with every name checked. The user must then tap “unselect all,” or Path will text a signup link to every friend.

The real problem here, according to Path, is that users are failing to unselect the option to message their Facebook friends during the sign-up process. Perhaps Path should make the Find Your Friends step during sign-up an opt-in, instead of opt out, option. Many people on Twitter are still complaining of Path texting their “entire address book,” but it’s unclear at this point if those messages are unrelated to the Facebook feature during sign-up.