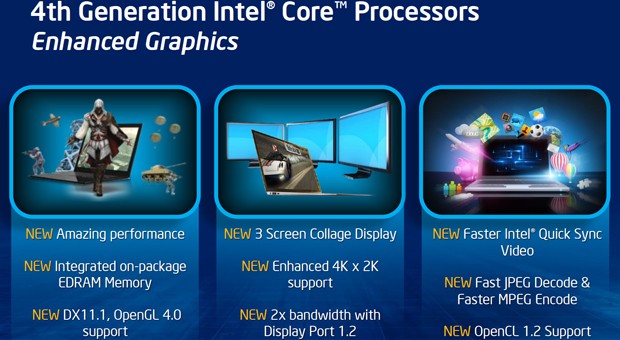 The next generation Intel CPUs, named Haswell, offer support for 4k displays even in the lowest-power version likely to be used in the MacBook Air – making a Retina MBA a feasible option for the first time.

Intel has announced that its Haswell processors will offer a choice of three different levels of integrated graphics, one aimed at long battery-life, the other two aimed at performance (via AnandTech).

There are two different ways computers can display graphics. The first is with a dedicated Graphics Processing Unit (GPU). The is the Rolls-Royce approach, delivering the best possible performance, and is used in most current Macs. But a separate video chip adds to the cost of the machine and uses more power, reducing battery-life. The cheaper method is what’s known as integrated graphics, where the main CPU also handles graphics, and is currently used in the MacBook Air, MacBook Pro 13 and Mac Mini. Historically, this has means significantly compromised video performance, limiting the frame-rate of games and the number of monitors the computer can support. What Intel is promising with its new CPU is the option of decent graphics performance without the need for a separate GPU.

But what could be of more interest to MBA and MBP 13 owners is that the entry-level U-series chip, the one aimed at ultrabooks, claims to offer 4k video support while drawing just 15W of power. This is less than the 17w of the current MBA chip. It’s this which makes a Retina MBA a possibility.

But before we get too carried away, we have to consider three different factors here. First, what does Intel’s claim of 4k support really mean? After all, Intel also claims the current-generation chip with HD4000 integrated graphics will drive a 4k display using a firmware upgrade – and it will, in theory. In practice, it does so very badly, offering frame-rates of around 24fps. This is well below any standard Apple would have considered acceptable. We need much more detailed info from Intel on that claimed 4k performance than the company has so far provided.

Second, even assuming that the 4k performance of the U-series chip is acceptable, there is the issue of battery-life. A Retina display has much smaller pixels, and requires more backlighting – around twice as much – which is one of the major factors affecting battery-life. When Apple introduced the Retina iPad, the extra battery-power required resulted in the device getting thicker rather than thinner, as you would typically expect with a later model. Would MacBook Air buyers be happy with a hi-res screen if the machine lost some of its sleekness?

Third, of course, is cost. While smaller Retina displays have higher yields and lower costs than bigger ones, they are still not cheap. The price difference between the standard MacBook Pro 15 and the Retina version is $600. Even assuming that price premium halved for the 11-inch MBA, that would still give it a price-tag of around $1100-1400. When part of the function of the MBA is to be an affordable entry into the Mac world, Apple may consider that too steep.

But if we don’t get one today, it’s unlikely to be far off. Graphic processor power keeps climbing, and display technology keeps giving us more bang for the same buck. And in the meantime, support for three monitors with OpenCL 1.2, DirectX 11.1 and OpenGL 4 compatibility will still be something to behold in Apple’s power-saving lineup of Airs, Minis and low end Pros. 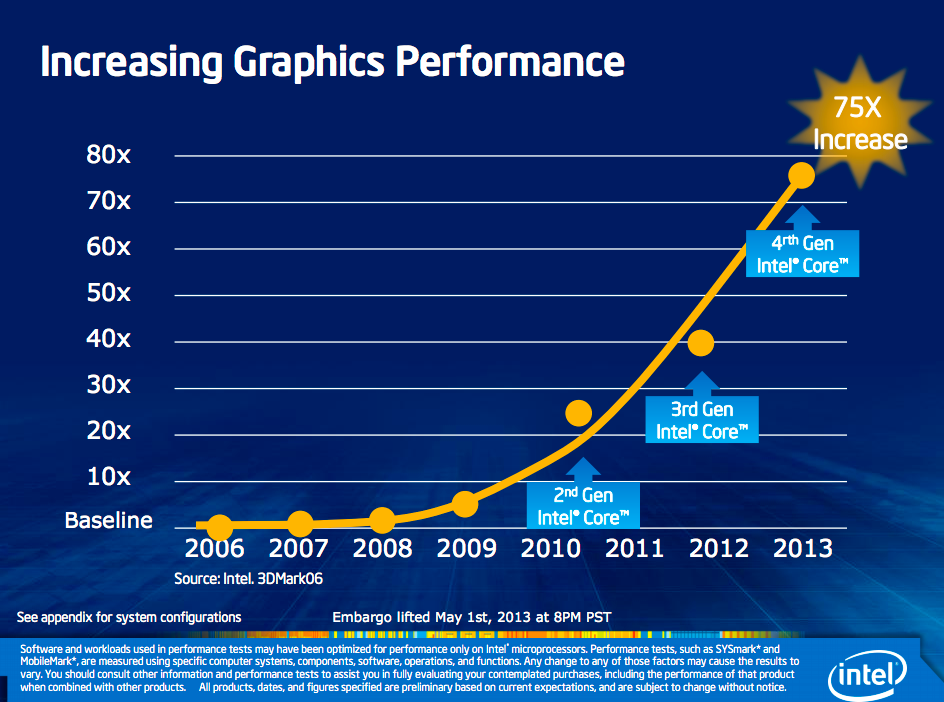