Will the low-cost iPhone in fact be a $350 mid-level handset? 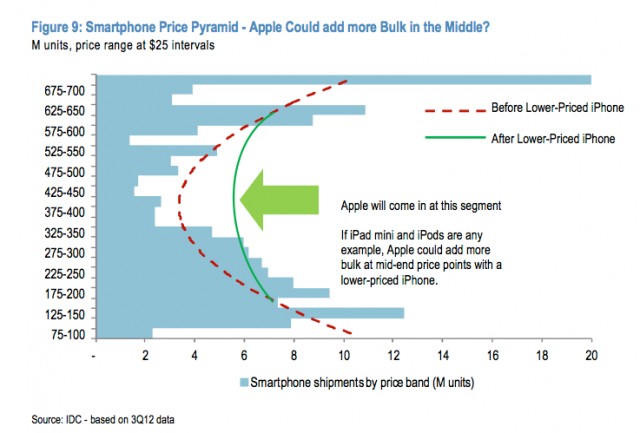 JP Morgan has put together an interesting case for Apple launching its new plastic iPhone as a mid-market device rather than a low-cost one, suggesting that Apple may price the phone at around $350-400.

The case, which AllThingsD describe as “pretty compelling,” is based on Apple’s approach with both iPod Nano and iPad Mini …

The Nano was launched at $199, just $100 below the main iPod model of the time and significantly above low-cost competitor offerings. The iPad Mini, too, launched at $329 when it had been expected to be pitched against products like the Kindle Fire at $199.

JP Morgan’s Gokul Hariharan and Mark Moskowitz put together the above graph to illustrate what they believe to be the logic behind the idea.

Currently Samsung dominates this segment ($200-500 price range) with 35+ percent market share. … We believe Apple could take 20-25 percent of this market in the next 12 months (from almost no market share currently), if it prices a lower-priced product at $350-400 levels.

I’m not so sure. The big money to be made now is not in the saturated developed world, but in emerging markets, and $350 is still a large chunk of change in countries like India and China. Apple also has to guard against too much cannibalisation of its premium iPhone offering, and positioning the phone as a mid-market one rather than a cheapie might increase that risk.

Granted Tim Cook is on record as stating that if you don’t cannibalise your own market someone else will, but that was in relation to the iPad against the MacBook range, where Macs represent a relatively small slice of Apple’s business. Risking too great a hit against its highest-margin product is a whole other level of risk.