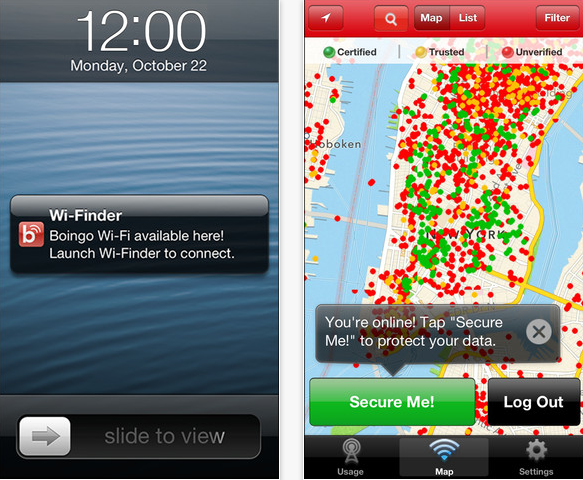 Boingo Wireless has updated its iPhone, iPad, and iPod touch “WiFi Finder” application with the ability to sign up for WiFi hotspot subscriptions with iTunes credentials. Boingo has over 600,000 WiFi hotspots worldwide, and I typically see Boingo hotspots at airports across the country. Being able to sign up via an iTunes-based subcription will make using a Boingo hotspot easier than ever, so even though Boingo is seemingly giving up a 30% cut to Apple for these new subscriptions, their user base will probably grow due to the easier sign up process. The plan via iTunes is $7.99 per month. As it has always done, the WiFi Finder app features a data tracker and a VPN service. The app is available for free on the App Store.

Boingo Wireless (NASDAQ: WIFI), the leading DAS and Wi-Fi provider that serves consumers, carriers and advertisers worldwide, today announced that iOS users can now use their iTunes account to purchase a Boingo subscription, making it easier than ever to enjoy Wi-Fi access at more than 600,000 hotspots worldwide.
The latest version of Boingo’s award-winning Wi-Finder app for iOS – now available on the iTunes App Store – links directly to a customer’s iTunes account, streamlining subscription sign-up and monthly billing by using existing iTunes credentials and billing information. Users can activate the new plan on multiple iOS devices, allowing customers to quickly connect all of their favorite iOS devices to unlimited Boingo Wi-Fi without entering account information.
“Signing up for a Boingo subscription just became as easy as typing in your iTunes password,” said Dawn Callahan, senior vice president of marketing and sales for Boingo Wireless. “iOS device owners already use their iTunes account to buy apps, music and other products on their phone or tablet; we’re adding that level of simplicity to the process of buying Wi-Fi.” The new iTunes-based plan is $7.99 per month.
In addition to enabling seamless login at hundreds of thousands of hotspots around the world, the app also includes an easy-to-use VPN service that protects user data free of charge.
The Boingo Wi-Finder app is available for all leading platforms, including Android, Windows and Macintosh. Boingo’s Wi-Finder app received the 2012About.com Reader’s Choice Award for “Best Travel” app, and the company is a three-time winner of the award for “Best Wi-Fi Service” from Global Traveler magazine.