Update: The analysts were right to be optimistic, but not optimistic enough

As we wait for Apple to announce its Q4 results in this afternoon’s earnings call, more than half of the analysts included in Fortune’s survey expect the company to beat its high-end guidance of $37B. The average is driven up by the amateurs, who come in at $37.38B, while the professionals expect just a touch under the top end at $36.95B.

Predictions on both revenues and earnings do vary markedly, however. While the consensus view is that year-on-year revenues will be up 3 percent and earnings down 6 percent, even among the professionals the earnings estimates span a 15 percent range.

Apple beating its own guidance wouldn’t have been remarkable in the days when Apple gave absurdly pessimistic guidance and then blew it away, but would be impressive since Cook started offering realistic ranges …

Apple began offering realistic guidance this year, offering a range running from what it has “reasonable confidence” of achieving to what it “believes” it will do. In Q2, Apple slightly beat its high-end guidance of $41-43B with revenues of $43.6B, while in Q3 it came in just below its top-end number at $35.3B.

Looking at the individual product forecasts, there’s a clear  split between amateurs and pros.

The official launch of the iPhone in China is the big unknown in the equation, with some big numbers being bandied about, but no hard data.

It’s also likely that supplies of iPhone 5s models will play a large role in the numbers. Demand was extremely strong, but production was struggling to keep pace with the gold model in particular, whose popularity appeared to have taken Apple by surprise.

You can listen to the live webcast from 2pm PT/5pm ET. The full table of analyst predictions can be seen below. We’ll of course be reporting the actual numbers as they are announced. 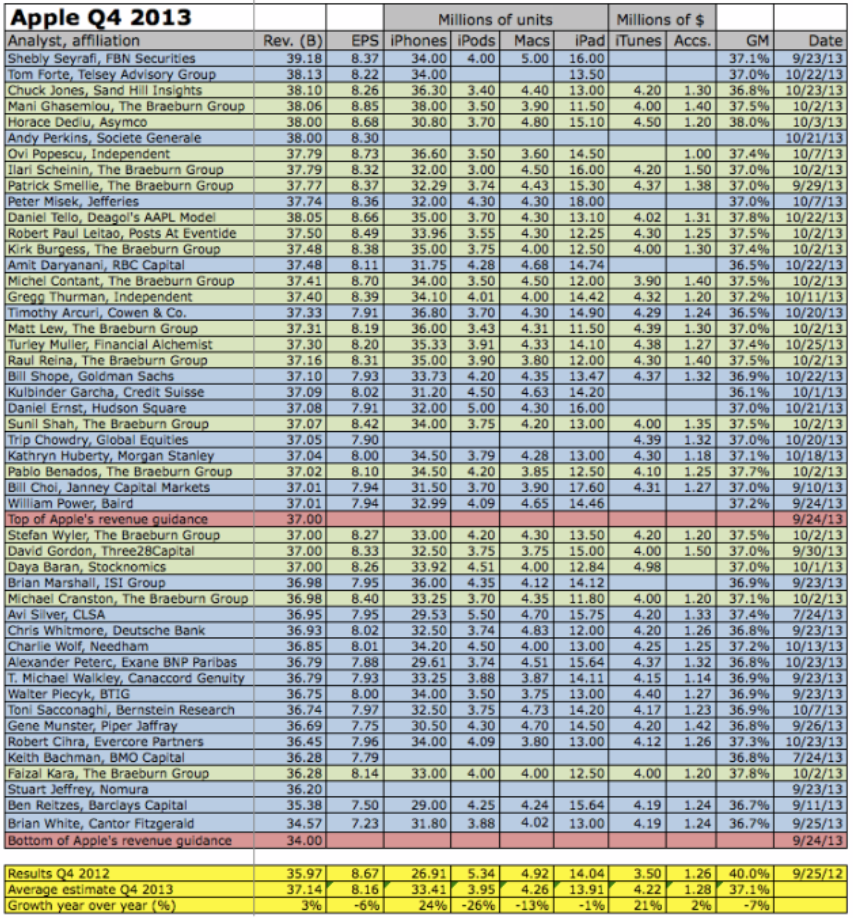