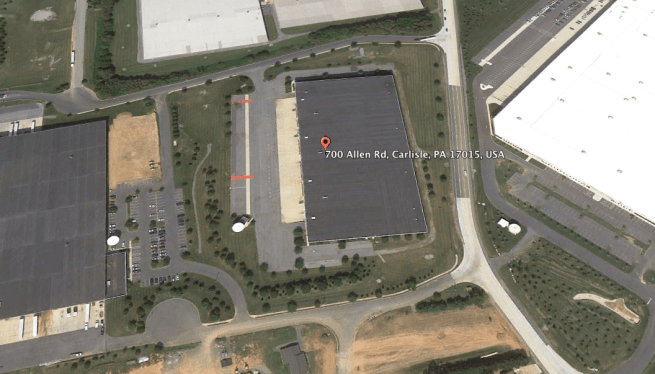 Apple has opened up a secondary dedicated AppleCare repairs warehouse in the United States in recent days, according to multiple sources with knowledge of the new center. The new warehouse is located in Carlisle, Pennsylvania and public records indicate that the facility comes in at just under 200,000 square-feet with an additional 2500 square-feet of space available for offices.

Apple will use this facility to conduct repairs and replacements and to manage, package, and ship repaired Apple devices to both customer’s homes and Apple Store Genius Bars across the country. When an Apple customer of a Mac computer, for example, needs aspects of their device replaced and fixed, their product is typically shipped to a similar warehouse in Elk Grove, California…

This California facility, just cities away from Apple’s Cupertino headquarters, has been Apple’s sole AppleCare repair center in the United States for several years. The Pennsylvania building will serve as Apple’s first major expansion of its repair facilities and is Apple’s first physical AppleCare presence on the East Coast of the United States. Apple will utilize the new center to be able to conduct repairs and part replacements at a faster pace.

Apple has smaller venues for conducting and managing repairs in Texas and in Memphis, but this new Pennsylvania location is a large, dedicated warehouse for repairs.

With Apple’s customer base consistently growing, it is important that Apple manages to enhance its support resources to assist these users. With both West Coast and East Coast repair centers, Apple will now ship devices for repairs to the center that is closest in proximity to the customer. In addition to ensuring a speedier repair time, the shipping times (back and forth) will obviously now be shorter as well.