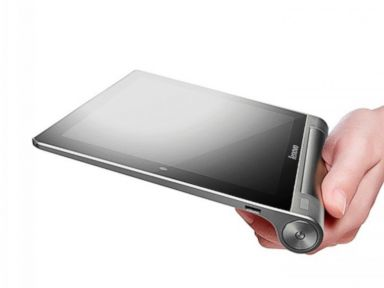 Actor Ashton Kutcher has joined Lenovo as a product engineer. Kutcher’s experience in engineering includes… basically nothing, although he did play Steve Jobs in the 2013 biopic Jobs, so that has to count for something, right? Right?

Kutcher’s first job at Lenovo will be using his celebrity status to market the company’s new “Yoga” tablet—an obvious first step for any aspiring product engineer (or, you know, celebrity endorser). The tablet, which Kutcher presumably had some “engineering” input on, is a flat aluminum enclosure with a rounded base that houses the power button. The Yoga is an attempt at an original body design, and it certainly wins points in that category as long as you only compare it to other tablets. When compared to other electronics, however, the originality quickly fades. The thing basically looks like an upside-down Apple Wireless Keyboard.

Clearly Kutcher’s time as Steve Jobs informed his sense of product design and influenced the hard work he did “engineering” the Yoga.  We look forward to seeing what other innovative and original ideas Kutcher “engineers” during his time at Lenovo.