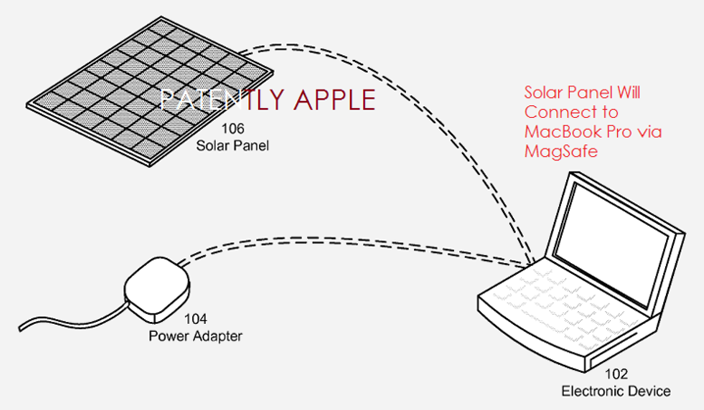 An innovative approach to solar charging revealed in an Apple patent application published today (via Patently Apple) could make it more practical to power both MacBooks and iOS devices from the sun.

The voltage and power generated by a solar panel varies with the amount of sunlight. To turn the power supply into something that can safely be used by an electronic device, you need a converter or regulator to deliver the correct specs to the device, adding cost and bulk to the panel.

What the Apple patent describes is building the necessary power management circuitry into the MacBook, iPad or iPhone so that it can accept whatever power the panel supplies. This potentially allows for cheaper and more portable panels …

We don’t often cover Apple patent filings, as the company patents all kinds of things for all kinds of reasons (many of them defensive), while only a handful of the ideas make it to market. This one may stand a greater chance of making it into production than most, however, as Apple is known to be a huge fan of renewable energy.

Apple already powers 75 percent of its corporate facilities from renewable energy, and has a stated commitment to reach 100 percent.

We’ve already achieved 100 per cent renewable energy at all our data centres, at our facilities in Austin, Elk Grove, Cork and Munich, and at our Infinite Loop campus in Cupertino. And for all of Apple’s corporate facilities worldwide, we’re at 75 per cent, and we expect that number to grow as the amount of renewable energy available to us increases. We won’t stop working until we achieve 100 per cent throughout Apple.

The project revealed by this patent is thus likely to have a decent amount of management visibility within the company.