It’s no secret that we’re fans of Bluetooth speakers here at 9to5Mac. So, naturally, it was exciting to a see a Bluetooth speaker from Naztech, the Koncert Boomstation, enter the scene. Combining a traditional Bluetooth speaker with a backup battery for your devices and a speakerphone makes for one interesting product, and I’ve been putting the device through its paces for the last few weeks. Let’s take a closer look. 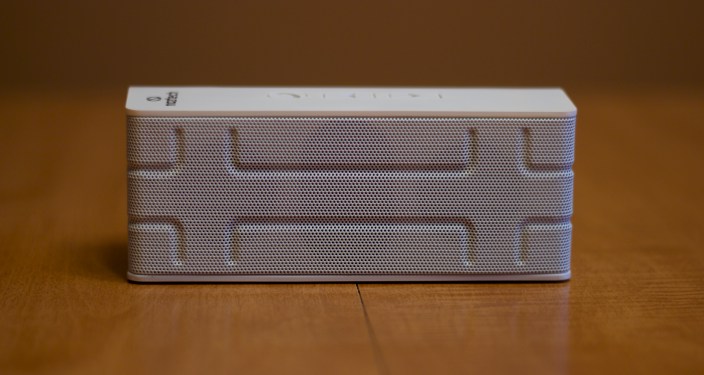 The Koncert Boomstation is a very simple device. The majority of the speaker is a matte, soft plastic, which doesn’t show fingerprints or scratches. It feels extremely high quality and sturdy, without any bending or creaking. Over the front, you’ll find a pressed metal grille for the speakers. The top of the speaker has 3 clicky control buttons for adjusting the volume/track or for playing and pausing/phone operations. I’ll talk more about this later. Aside from product info, the bottom of the speaker is mostly empty, with little feet for the speaker to rest on. Finally, on the side, you’ll find the speaker’s connections: a micro-USB port for charging the speaker, a full-sized USB port for charging your devices off of, a 3.5mm auxiliary jack, and the power switch.

There all also two small LED indicators, each performing separate functions. Aside from the device itself, Naztech includes in the box a cloth carrying bag for the speaker, a micro-USB charging cable, and a 3.5mm cable for devices without Bluetooth. I would’ve liked to see a USB power adapter in the box as well, but my iPhone’s charging brick worked just fine. 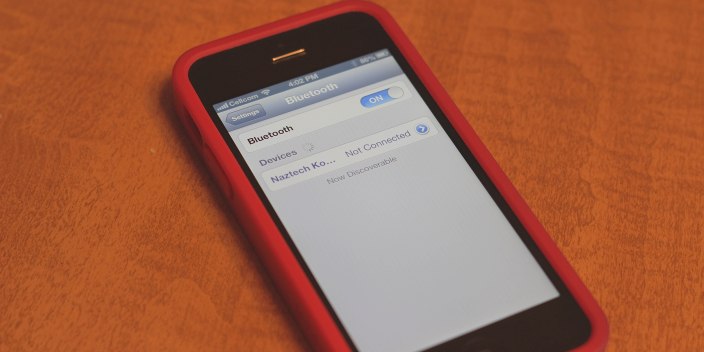 After first receiving the speaker, I charged it up fully. Naztech says the device takes about 3 hours to charge, which was accurate. To use the speaker, all you have to do is flip on the switch on the side, and a green LED indicator will come on, followed by a tone. Setting it up to work with your devices is easy as well. On an iPhone, all you have to do is turn on Bluetooth and tap on the device once it shows up to connect to it. From then on, the device will automatically connect whenever it’s powered on. I was also able to pair the speaker with my Mac, although it took a few extra steps. The Bluetooth setup process isn’t as simple on a Mac.

Once your device is paired, a second, blue LED indicator will show. From then on out, all of your audio will be redirected through the Koncert Boomstation. Here’s where things get interesting. The speaker has multiple functions. Let’s first look at it from a music standpoint. When you’re dealing with audio, the three buttons on top of the device have very specific functions. The phone button plays and pauses the current track. Hitting the arrow buttons will skip through tracks. Volume is controlled by your device. In this mode, any voice input will be redirected from your device into the speaker’s built in microphone. If you’d like to play audio with a non-Bluetooth device, you can simply attach it to the speaker with the included 3.5mm cable. Everything functions the same, you just skip the pairing process. I assume the battery will also last longer without Bluetooth connected as well.

When wirelessly connected, the speaker is supposed to have a range of about 10 meters, or around 33 feet. I’d say a more conservative range is about 18-20 feet. I was able to go a room or two away before my audio started to break up. This is a limitation of Bluetooth, not the speaker. To get around this limit, if you own an AirPort router with a 3.5mm jack in it, you can simply connect your speaker right to the router. It essentially turns the speaker into a AirPlay receiver, meaning that you can simply stream audio over your local network, circumventing the need for a Bluetooth connection, and extending your range to that of your wireless network. It worked great in my tests.

The Koncert Boomstation can also act like a speakerphone, which is great for conference calls. When you have an incoming call on your phone, you can just press the phone button on the speaker if you’re connected. The call will start, and both your audio and the microphone will be redirected to the speaker unit. Ending a call can be accomplished by pressing the button again. if you press the button twice rapidly, you can redial your last caller. In speakerphone mode, the arrow buttons act like volume keys.

Last, but not least, the speaker can function as an external battery pack for any USB device if you need a quick charge. Just connect the USB cable for your device to the speaker and turn it on. I used the speaker to charge my iPhone, and it worked great. 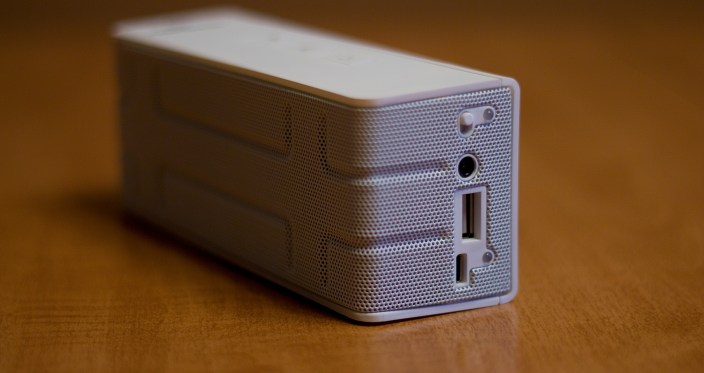 I was blown away by the battery life on the Koncert Boomstation. Naztech says that you can expect to get about 18 hours of audio out of the speaker, or 48 hours of speakerphone audio, but I figured those were ideal, unrealistic numbers. I was wrong. I had to delay this review twice because I couldn’t drain the battery. It took me three and a half weeks of daily usage to drain the initial charge I gave the speaker after taking it out of the box for the first time. I didn’t keep track of my exact usage stats until near the end, but I ran the speaker for over 8 hours just in the last four days alone before it died. Extremely impressive. As an external battery pack, I was also happy with the results, charging up my iPhone 5 about twice from a full charge on its 2500mAh battery.

Battery life is great, but it’s nothing without great sounding audio, right? Fortunately, the speaker came through here as well. Compared to the built in speaker on an iPhone, the audio was louder, clearer, deeper, and much more full sounding. I also preferred it over the speakers in my MacBook Air. You’re not going to get floor-thumping rich audio out of the speaker, but for its size, weight, and price, I found it a great step up from the internal speakers on my devices. Make sure to watch the video review above for an audio comparison between my iPhone’s speaker and the Naztech speaker. 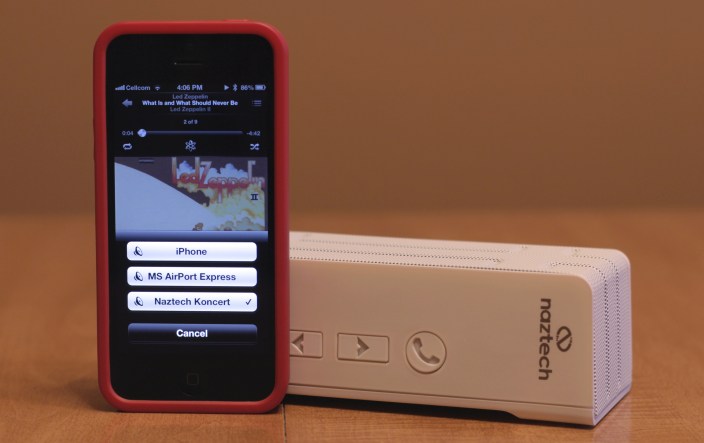 Overall, the Naztech Koncert Boomstation is one seriously impressive speaker. It’s small and light. It looks good. It gets great battery life. The audio sounds great. There’s not much about it I don’t like. In fact, the only changes I’d like to see are the ability to adjust music volume with the arrow buttons, and the ability to leave the speaker portion of the device off while charging my iPhone. If you’re in the market for a Bluetooth speaker, I highly recommend the Naztech Koncert Boomstation. You can pick it up here for $89.99.