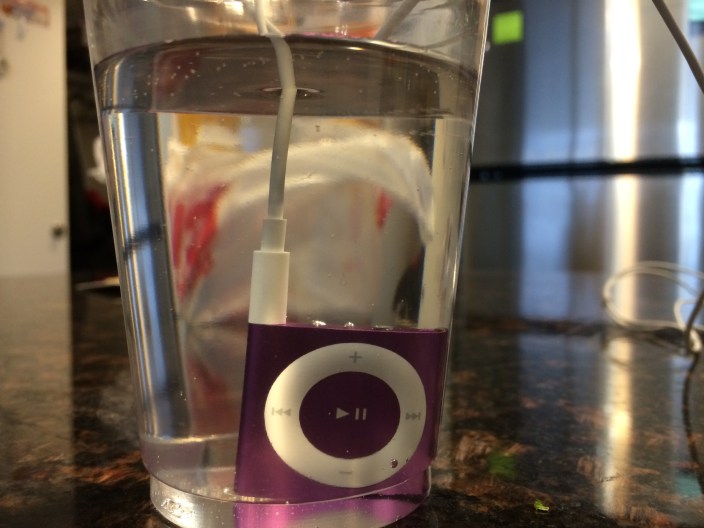 For the past few months, I’ve been testing Underwater Audio’s waterproofing service for Apple’s iPod shuffle. As the name implies, Underwater Audio is a company that created a technique to waterproof the iPod shuffle without changing the design, form-factor, size, overall weight and thinness of the wearable, lowest-cost iPod…

To waterproof the iPod Shuffle, the company uses proprietary materials and stuffs it inside parts of the iPod so that water cannot seep through into the internal electronic elements. Before shipping out the waterproofed iPods, Underwater Audio does extensive testing to ensure that the device cannot be damaged by water. In my unscientific tests, the iPod shuffle faired well, did not stop working, and audio quality did not degrade over time. Unlike some other services, this service is true waterproofing, not a service for the iPod to become “water-resistant.” The iPod shuffle following conversion can be submerged into water, swam with, surfed with, and more. Everything about the iPod shuffle worked for me just like a non-converted iPod shuffle would. However, the materials needed waterproof the iPod do create one downside: the controls of the iPod shuffle become difficult to press. They feel like they are stuck into the iPod, but they still work. It can get annoying at times, but users will likely get used to it after a few days or weeks of use.

The other potential downside of the waterproofed -itself- iPod shuffle is the price. The Shuffle direct from Apple costs $49, so users will have to decide if a waterproofed version is truly worth the price of three regular Shuffles. It’s also worth noting that there are several much more cost effective solutions for those seeking a waterproof MP3 player. However, the ease-of-use, iTunes compatibility, design, wearability and ecosystem for a waterproof iPod shuffle will likely be an interesting solution for many people.