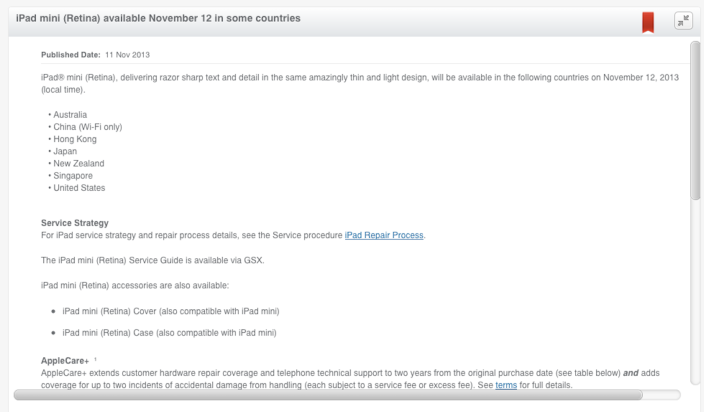 Apple’s internal “GSX” tool for Apple support technicians and resellers says that the iPad mini with Retina display will become available on November 12th. We’ve confirmed the existence of the above note in GSX, which was first noted by MacRumors, with multiple independent sources. The note says that the Retina iPad mini will become available in Australia, China, Hong Kong, Japan, New Zealand, Singapore, and the United States local time on Tuesday the 12th. Although this is confirmed to have come out of an Apple internal system, a Retina iPad mini launch date tomorrow seems very odd…

First, it is already November 12th local time in Australia, New Zealand, and other countries in the above list, and there have been no indications that Apple has launched the new Mini in those locations. It would also be unprecedented for Apple to announce the release date for a major product launch to support staff, not via media outlets, its official website, or a press release. It would also be surprising to see Apple launch the iPad mini on the 12th, when the company warned of potential constraints and said the product would arrive “later” in November. Also, if you look at the list above, none of Apple’s first tier European countries like the UK and France are listed.

On the other hand, we’ve now heard from not one but two Best Buy sources that Apple has informed them of incoming Retina Mini inventory which could be from the same GSX sourcing above.

We’re digging for more information and will update as we hear more.