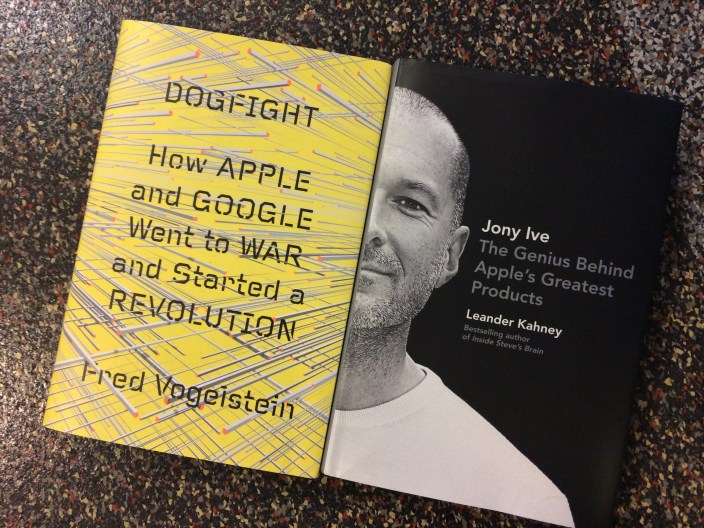 For fans of books about Apple, this is a epic time. Earlier this week, Fred Vogelstein’s book Dogfight went on sale, and today, Leander Kahney’s The Genius Behind Apple’s Greatest Products book about Apple Senior Vice President of Industrial Design Jony Ive went on sale.

Dogfight focuses on the emergence of both Apple and Google as the world’s two preeminent technology companies, and it details the competition of the two companies and the respective product development cycles of early iPhones and iPads and devices running Android. The book provides first-hand accounts of life working under Steve Jobs, and details the incredible run-up to the launch of the first iPhone in early 2007…

Kahney’s unbelievable biography ties together several interesting (and some unknown) parts of Ive’s upbringing, education, and design philosophies. The book also provides some tales into Ive’s interactions with other Apple executives, work with Steve Jobs, and design techniques for the original iOS Devices like the iPhone and iPad. During some parts of the book, you may feel like you were actually in the room when decisions were made. For fans looking to read an interesting take on Apple’s design chief, Kahney’s book is worth a read.

Both books are available in audio format for free at Audible for new Audible customers. In addition to these two new books, former Wall Street Journal Apple reporter Yukari Iwatani Kane is working on a book about Apple in the post-Steve Jobs world. Her book, Haunted Empire: Apple After Steve Jobs, is scheduled for release on March 18, 2014, and it is already available for pre-order.

Below, we’ve compiled some interesting stories from within Vogelstein’s Dogfight:

The book includes several other details about the development of the original iPhone, and it also provides a close look at Apple’s relationship (and fallout) with Google. I definitely recommend this book for anyone interested in an in-depth look at the growth of two of the world’s strongest technology titans.