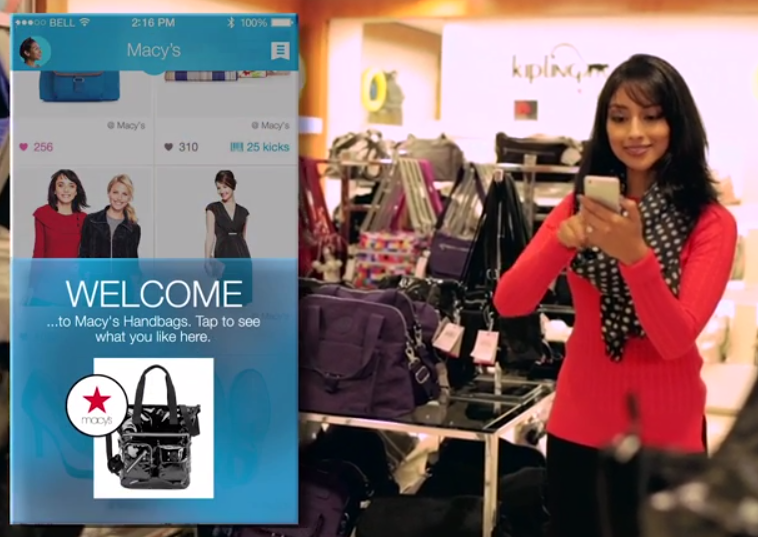 Apple’s iBeacon system is to get its first retail launch in Macy’s branches in Union Square, San Francisco and Herald Square, NYC, within the next few weeks, reports TechCrunch.

Apple will of course be using the system in its own retail stores, though likely after the Macy’s launch. Macy’s is already operating a closed trial of the system.

Offers now will be pinged to users right when they are walking past them, or past a department that contains products that users have shown interest in before. And for those who have opted in, the iBeacon technology will also automatically open the app and can trigger other actions when you enter a participating store, such as telling users how many loyalty points they currently have to redeem towards a purchase …

iBeacon has so far had a low profile, with most non-techies still completely unaware of it – but all that looks set to change very rapidly with a flurry of major retailer launches. Shopkick, the company handling the iBeacon deployment for Macy’s, said that other retailers expected to launch soon include American Eagle Outfitters, Best Buy, Crate and Barrel, JCPenney, Old Navy, The Sports Authority and Target.

Macy’s CMO Martine Reardon said that the store believes iBeacon will be of significant benefit to shoppers.

We have made great strides in creating the best omnichannel experience at Macy’s, and delivering the most relevant messages and offers to our customers at what is arguably the most helpful moment – while they are shopping in our stores – can be very advantageous for the customer.

With this shopBeacon trial, we are testing the most leading-edge mobile technologies, because we believe they can even further enhance the in-store experience for Macy’s shoppers.”

Shopkick says that a key attraction is the ability to blur the lines between online and offline shopping.

It can also tie at-home browsing to in-store benefit—if [a customer] “likes” a specific product in the app, shopBeacon can remind her when she enters the store that sells it. It can also deliver department-specific offers throughout the store—so the boots she liked show up at the most useful time—in the Shoe department.

If this blurring of the offline and online worlds sounds familiar, it’s because it’s exactly what Apple’s retail head Angela Ahrendts talked about in a video made when she was still CEO of Burberry.

Even those like me who hate physical shopping may find it a little more interesting in the months to come.